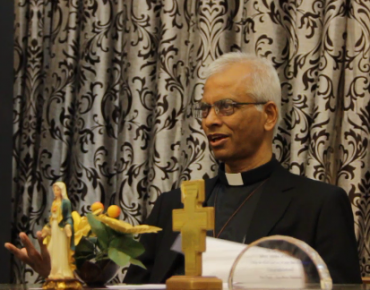 (Note: Fr Tom Uzhunnalil, a Salesian priest who was in the custody of unknown (?) militants for some 18 months is now released from captivity and that certainly is Good News. Unfortunately, the legacy of Fr Tom is raising many eyebrows too; a lot of questions have come up. Was his assignment in Yemen, matching with the interests of the Government of India? Do the hard core militants who killed 16 persons including four Missionaries of Charity nuns on the same day of Fr Tom's abduction need this much of glorification by Fr Tom? Who deserves to be thanked – the Vatican which supposedly paid the ransom money or the public who were in relentless prayer? Fr Tom says that he is ready to go to Yemen again, if God so wills. He is talking about a Will that is contradicting the countrie's policies and compelling the public for a re-interpretation of it. However, the Matters India Interview done by Shri Cyriac Sebastian with Fr. Tom is a balanced presentation and an in-depth study of what really is on. Everything the reader may want to know is in it.  Joseph Mattappally, Asso. Editor CCV).

Read the interview. In the pic. Fr Tom Uzhunnalil

Kochi: Father Tom Uzhunnalil, a Salesian priest who was released from the captivity of Islamic militants last month, says God has a plan in sparing him the gift of martyrdom.

In an exclusive interview with Cyriac Sebastian, Matters India Special Correspondent for Kerala, and photographer Anil Joseph Mathew, the 59-year-old priest shared his experience during the 18-month captivity in Yemen and the rousing welcome he received in India. He met them at Don Bosco Vaduthala, Ernakulam, on October 2.Excerpts:

MATTERS INDIA: You have spent five days in India in your so-called second life. What are your sentiments now? Did you expect such a rousing and loving welcome in your motherland?

FATHER TOM UZHUNNALIL: The response I got was beyond my expectation and I feel happy that I am loved this much and I am thankful to every one for their affection and prayers.The Central government, State Government ,all political outfits, the Catholic Church in India and especially in Kerala ,every one gave me a rousing and loving welcome. I am thankful to all of you and Almighty God as well.

How have all these hectic programs affected your health? Are people considerate towards your health? Do you get sufficient rest and proper medication? What is your weight now?

Yes, a bit tiredness is there, but that does not matter. I am diabetic and it is the main problem as of now, apart from that I feel healthy. For the last couple of days I was unable to monitor my weight but it is in the region of 63-65 kg and I am thankful that all including the media have been receptive and understanding when they are with me and I thank them in return.

In Delhi you said you have become a property of the entire humanity. Could you elaborate a bit?

It was brought to my attention that not only my family (Uzhunnalil and my Salesian brothers) but people of many nations have thought of me, remembered me and prayed for my wellbeing and release from captivity. It was this knowledge of overwhelming compassion and love towards me that made me realise that I am not just a Catholic priest from Kerala but rather a property of the entire humanity.

While addressing those at the Mass in Delhi’s cathedral you said God has spared you the gift of martyrdom? Do you regret it? What were your thoughts on the day of your abduction? Did it ever cross your mind that the abductors would kill you as they did with the nuns and workers of the Aden centre?

When God spared me from the gift of martyrdom, he had a definite plan for me. God had a plan in sending me to Yemen. During my days of abduction and captivity He had a plan, and even now He has a plan for me. I have to act according to His plans. why do I worry about His plans or regret it? I am thankful to God and my fellow humans for my life. Yes, as a normal human, there was fear and concern in my mind during my abduction. But during my captivity the abductors showed signs of compassion and they never told me that they were going to kill me. Hence the fear of death was never present.

Did you ever get to know about the false news about your crucifixion on Good Friday? What were your thoughts when you heard about it?

My captors never told me that they wanted to kill me and I was never made aware of any such plans. I was kept in closed confinement and was not at all aware of the days or dates. I came to know of the dates only when they recorded the videos .But after my release I heard about it from my fellow Salesians and why would I comment about something fictitious.

When did you first get a glimpse of what was happening in the outside world?

My captors kept me in closed doors but I was getting sunlight through the windows. I was not aware of anything happening outside my room let alone the world. It was only on the day of my release I had a glimpse of the world outside.

Have you ever experienced hopelessness and despair as Christ felt on the cross during your captivity? Did you expect to be freed?

Our Lord filled me with Hope always. During my captivity prayers were my only solace. From Dawn to dusk I kept on praying. It does not mean that I knelt on the ground, folded my hands and prayed aloud but rather I prayed constantly and relentlessly in my mind, I never ceased to pray silently. Without bread and wine, without vestments, or texts I recited the Holy Mass in my mind. Offering Mass and praying relentlessly every day was what kept me going. It gave me a lot of strength, faith and above all Hope.

How has this captivity helped your personally, psychologically and spiritually?

This gave me the chance to deepen my faith and Hope in Christ. Spiritually it was a great test and yet it strengthened me but psychologically any captivity was a torture.

Are you willing to go back to Yemen if asked? Or will you go to a similar difficult and dangerous mission area?

That depends up on my seniors, wherever they send me I have to work. I am first and foremost a missionary. It is my duty to serve. Whether it is Yemen or anywhere else in the world I will serve.

There were allegations that you went to Yemen ignoring Government of India advise to avoid that country. What do you say?

No comments as of now.

Do you have any message for the Church and society in India and especially for those Catholic priests and nuns preparing to go for mission work overseas?

Realize that God has a plan for all of us. It is in our interest that such a plan is made and we all must submit to it.