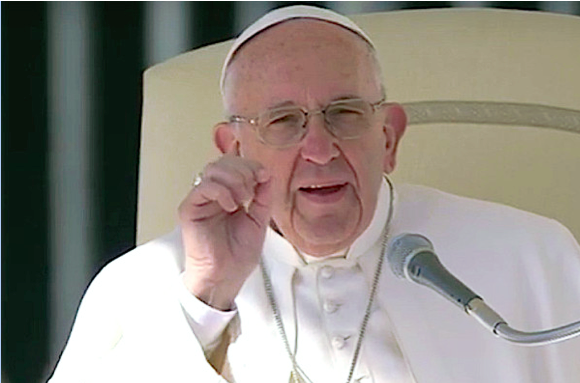 Religious practice that is only concerned with looking good — a “make-up” religion — is not what Jesus is looking for, Pope Francis reminded today at the Casa Santa Marta.

(Note:  Jesus is emphatic on his NO to a cosmetic religion of show, outward appearances and exhibition. What else is a religious liturgy, rituals with gorgeous garbs in gold and silver,  festivals with processions on roads with beating of drums, music and fireworks, all characteristics of Catholic Church in India?

Mathew 23rd, a rebuke par excellence of the priestly class, is the one chapter in the Gospel ignored with a vengeance in the Catholic church, we repeated many times in these columns. Not so Pope Francis. He highlights it to rebuke without mincing words and to exhort to pray “in secret  without blowing our trumpets because the path of true religion is Jesus’ path: humility and humiliation. And as Paul says to the Philippians, Jesus humiliates himself, empties himself. This is the only way to remove egoism, cupidity, arrogance, vanity and worldliness from ourselves.”

Compare this to Jesus who hid his richly deserved divinity to empty himself in order to appear as a human slave to draw on himself the opprobrium: “Is he not the son of a carpenter…. What good can come from Nazareth etc.” What respect knowledgeable people have for such bishops? This is a  vast subject least discussed in the church for fear of self-accusation and strong opposition to humble living styles among bishops. They are just hiding their heads in the sand like  Ostriches to deceive themselves and others. May they wake up to the sunlight of reality, Pope Franchis preaches. James kottoor, editor).

In his homily for morning Mass, the Pope spoke about Jesus’ criticism of the Pharisees’ focus on outward appearances.

According to Vatican Radio, Pope Francis noted Jesus’ rebuke to the Pharisee who criticized him for not observing the prescribed washing before the meal.

“Oh you Pharisees! Although you cleanse the outside of the cup and the dish, inside you are filled with plunder and evil.” And Jesus repeats this many times in the Gospel to these people: Your interior is wicked, is not good and is not free. ‘You are slaves because you have not accepted the justice that comes from God, the justice that Jesus has given us.'”

The Pope noted that Jesus urges us to pray without being seen, without being show-offs. Our Lord, he stressed, instead shows us the path of humility. Pope Francis went on to explain that, as Jesus said, what is important is the freedom given to us by redemption.

“That inner freedom, that freedom to do good deeds in secret without blowing our trumpets because the path of true religion is Jesus’ path: humility and humiliation. And as Paul says to the Philippians, Jesus humiliates himself, empties himself. This is the only way to remove egoism, cupidity, arrogance, vanity and worldliness from ourselves. On the contrary, these people that Jesus rebukes are people who follow a ‘cosmetic’ religion: (about) show, appearance and pretending to be something but inside… Jesus uses a very strong image to describe these people: ‘You are like whitewashed tombs that look handsome on the outside but inside are full of the bones of the dead and every kind of corruption.'”

Pope Francis pointed out that Jesus asks us to perform good deeds with humility. He said you can do all the good deeds you want but if you don’t do them with humility, as Jesus taught us, these good deeds count for nothing because they are born from you and your self-assurance rather than from the redemption that Jesus gave us.This same redemption comes via “the path of humility and humiliations because humility never comes without humiliation. And we see Jesus humiliated on the Cross.”

“Let us ask the Lord for us never to get tired of journeying along this path, to never get tired of rejecting this religion of show, of appearance, of pretending. And let us journey silently doing good, freely just as we freely received our inner freedom. And may he guard this inner freedom for all of us. Let us ask for this grace.”