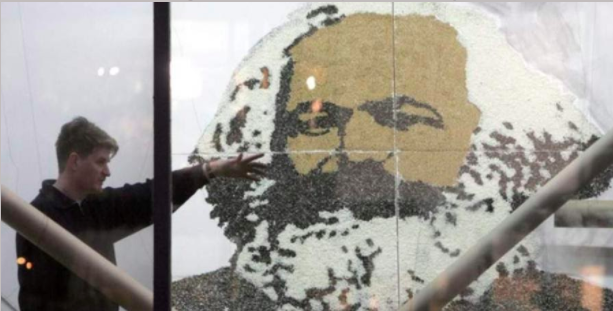 When & where was true Communism practiced? Giving Marx to our leaders!

Since Marx was the paramacharya of communism, it’s only fair to begin by asking whether our communist leaders contributed according to their ability? – T J S George, in New Indian Express, 05th July 2020

'Nothing can have value without being an object of utility.' IN PIC: An artist completes an installation featuring a giant portrait of German philosopher and historian Karl Marx, in a Berlin gallery 03 February 2005. (Photo | AFP)

No one in Need!

In the first Jesus community everyone sold their property and entrusted the money to the central pool. Those in charge were honest to the core, so they distributed the collected funds according to each one’s need. Therefore there was no one in material need in that community.

Seeing this outsiders exclaimed, “How they loved one another! There is no one in need!” That prompted the fast growth of believers in Jesus. All those who were in material need simply joined and followed their way of life! So the first Jesus community grew and swelled to busting.

Of course all had to sell their material possessions and entrust what they gained to the central pool. But what did Ananias and Saffira, the exemplary couple do? They sold only half of their property and gave the money saying it was the price they got for their whole property sold. They simply lied.

First the husband, who fell dead after lying, then the wife who came later but lied as agreed before. She also fell dead! Both were taken out and buried! That was how the Spirit of God worked then. That shook the whole people around, and no one ever tried to join the Jesus community by hook or crook!

We have written elaborate articles on it long ago, so we stop here. That is why we always said, JESUS the Nazarene alone was the IDAL Communist and also his immediate followers described in the Acts.

Organized Communist party, of course was founded by Marx with the clarion call: “Workers of the world unite, for you have nothing to lose except your chains!” But how did they grow and what their present state of prosperity and peace?

Comparing the Jesus group of Communists and present day communists the late saintly Archbishop Fulton J. Sheen, whom I had the opportunity to meet in the US said and wrote the following.

“Jesus group of Communists said: All that is mine is yours; the present day communists say, all that is yours is mine!” And they make sure to make it all theirs by hook or crook, failing which through the barrel of the gun!

That is why all churches, especially the Catholic variety has been bitterly against Communism. Pope John Paul II, was the latest example of wiping out Communism in his Poland. There of course was for good reason. But was Pope John’s Church practicing Jesus-Communism? Neither his church nor any of the Organized churches today!

What would Jesus say to Hierarchy today?

That was why Jesus, normally meek and mild, was rough and wild, bitter and brutal instead of being sweet and gentle, against the high priests and Pharisees, “You hypocrites, white-washed sepulchers, brood of vipers” etc, the  whole of Mathew 23 from start to finish. Will Jesus have milder criticism against the present day Hierarchical Church?

What do you say? I think he will have worse language to use against today’s financially corrupt and sexually stinking hierarchical Church. How long the Zero Church is  going to sit on the Church act drawn up by the eminent and saintly Judge Krishnamenon? They will never let go the finances of the Church from their firm grip, no matter how loud the laity shout! Compare the Jesus community of old to the present hierarchy which has made the house of God into a den of thieves.

That is why CCV has been clamoring for long for the disbanding of all organized churches, failing which the thinking sections of the laity should get out of them, as is happening in Mysore, and those who go to churches should not put a penny in the “Sthotra Kashch” offertory collection during Mass. St. Corona has done half the job forbidding over 60ies to go to Church.

CCV doesn’t think it has to speak more frankly and sharply to the Church hierarchy! It has not moved one bit, nor opened its mouth against all the abuses and atrocities perpetrated by a criminally accused Mysore Bishop, in spite of so many appeals by men of integrity for the last two years! So speak up, get out of churches or get buried, before Corona devourers them and you.  james kottoor, editor ccv,

Karl Marx summed up a complete philosophy when he set forth the precept, ‘From each according to his ability.’This was not communism. It was simply the acceptance of a guiding principle of life, that every individual had a responsibility to society.

Does a father or a son, a factory owner or a businessman, a film star or a sportsman, a journalist or an engineer contribute to society according to the best of his ability? If he doesn’t, he is living off others who do.

The men who emerged as communism’s most influential leaders, Jyoti Basu and E M S Namboodiripad, were men of substance, respected by friends and foes alike for their intellectual calibre and political sagacity.

Their eminence within the party was unchallenged.

But their achievements on the ground as chief ministers did not measure up to their ability. In both the states, laws were changed with the sole aim of ending feudal landlordism, just as the textbooks said. What happened to agriculture in the process was not a matter of interest.

In Bengal, regional imbalances developed and grassroots poverty levels rose high. The dilapidated tram system in Kolkata, a disgrace, continued as if to symbolise the stagnation.

In Kerala, the fabled granary of Kuttanad lay waste because paddy fields were entrusted to IAS officers to run. Today, the state is dependent on imported food grains and vegetables. In both states, ideology won over reality.

In China, reality won over ideology. Deng Xiaoping created his own precept when he said famously that the colour of the cat did not matter as long as it caught mice. Cats of enterprise began catching mice so successfully in China that prosperity levels rose within one generation for vast sections of the population.

If EMS and Jyoti Basu had used their power to introduce similar reforms in the party, the story of India would have been different.

But they chose to be men of the moment, not men of history. After them, the party went from bad to worse until, in West Bengal, it was thrown out of power and, in Kerala, it became synonymous with murder politics with Prakash Karat, CPM’s most inconsequential general secretary, spending his time reading text books.

The story is no different elsewhere. Jawaharlal Nehru enjoyed popularity and power, rare in democracies.

With the parliamentary majority he enjoyed, there was nothing he could not achieve. He did introduce attitude-altering reforms that helped modernise the country. But it cannot be said that he did the best according to his ability.

There were badly needed changes that only he had the influence to introduce. Administrative and police changes, for example.

The British had developed the civil service and the police force to act as masters and oppressors of the people. They remain just that to this day. What was easy to reform then would be difficult now.

Indira Gandhi’s power and popularity reached dizzy heights in 1971 following the Bangladesh war. Yet, within four short years, she took the country to its lowest ebb with the imposition of Emergency. Rajiv Gandhi’s parliamentary majority reached a record 404 out of 533 in 1984.

He even declared a wellmeant plan to clean things up and imaginative programmes in key areas like telecommunication.

But he caved in soon, unable to stop relatives from abroad and friends at home from manipulating the system for private ends. The system devoured him. None of the Gandhis served the country according to their abilities. They made the country serve them.

Ditto with other parties. Mamata Banerjee, with her eccentric twists and turns, is yet to achieve anything of substance.

Mayawati used power to immortalise herself in statues and monuments. The prophet of socialism, Mulayam Singh Yadav, turned rank criminals into Cabinet ministers. The less said about the socialist of Bihar, Lalu Prasad, the better.

Even A B Vajpayee was forced by party pressures to abandon policies of moderation and turned himself into a narrow Hindutva warrior.

The chief minister under whose watch the Gujarat riots took place adjusted himself deftly after he became the prime minister in 2014. But ideological beliefs were strong and he seemed happy to see the fanatic fringe growing.

When those who have the power to act wisely do not do so, they fail to function according to the best of their ability. Marx prescribed a yardstick that was tough. And fair.