Get rid of Priestly class to save! Who’ll save Christianity from Church? 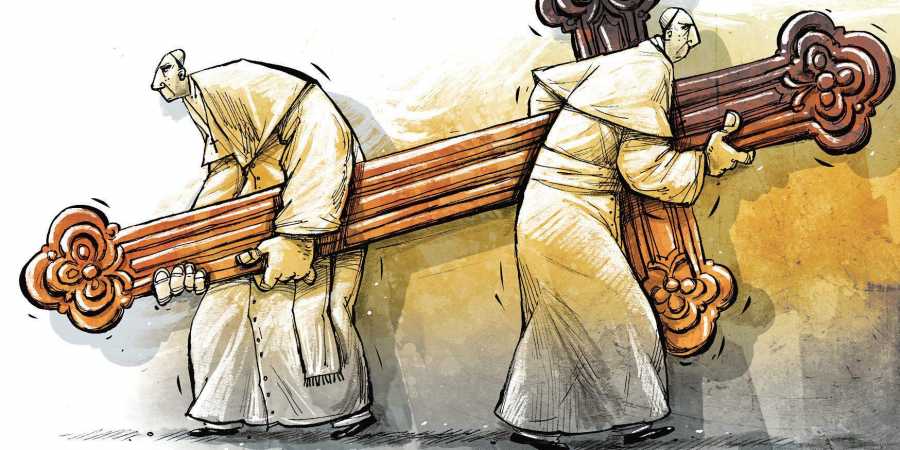 What is propagated thereafter, in the name of God, has only one shaping purpose—to promote the interests of the priestly class at the expense of everything else.

Note: it had been our leitmotiv or recurrent theme from over ten years ago, that Churchianity of the clerical class, specially the graded hierarchical structure worse than caste system, has to be dumped in the Arabian sea to save Christianity,  more precisely the followers of Jesus.

Jesus made his debut on the streets of Jerusalsm as a youthful upstart in his thirties as  a mendicant homeless preacher with his Nazareth manifesto: ‘Good news to the poor, sight to the blind etc.  although many questioned: “What good can come from Nazareth?”

“Church is fellowship not groupism; to rule is to serve, not  lording it over;   evangelisation is not  colonisation; harvesting of  souls isn't cultivating  churches(Pallikrishi)  for reaping dollars  ($ Koithu);   cross is for crucifying self, not others; any Rite is all right to pray anywhere,” especially in the cave of one’s heart, not on that mountain or this, in that temple or this;  we wrote already  in 2011, in James-kottoor-speaking website among other such articles.

This we did and continue to do  to liberate organized churches, especially the Syro-malabar variety from its spiritual, clerical, Episcopal colonisers and empire builders preaching their gospel of prosperity, not of poverty. But will the worshipers of the golden calf ever listen or take heed when they are  bent on building their own Medical college (or Maadical, meaning grabing or overcharging, critiques ask) purported to be the root cause of all the land sale and purchase mismanagement scandal in Ernakulam? One should beat a fallen  horse, so no more on it since it is something, we can neither swallow or spit out.

In the article below,  noted writer Valsan Thampu parades examples galore to prove to hilt, nay to wake up and shake out unthinking blind  believers led to slaughter like mute sheep. The message is that they have to  be their own saviours by liberating themselves from these ‘so-called pastors’ with wolf’s skin and smell.

In the previous editorial note: “Lost faith in Bishops?” in CCV we already wrote that Jesus never founded a hierarchical church to rule and dominate, but a company of CATTLE CLASS which rides rough shod even on equality and competes to take the last place, following Jesus’ example of total self-emptying  in washing the feet of his disciples.

Columnist Valson’s article is forcefully self-explanatry. The fires battle going on in all organized churches is between professional preachers with vested interest,to live a life of comfort, which Pope Francis calls the poison of“clericalism’ and the practisers of Jesus’ example of universal brotherhood starting with loving and caring for those most in need, thelast, least and lost. The number of those in the first group is too many and in the second far too few.

The same is the case with all organised religions, since like all political parties; they are first and foremost for the organisers.  We see this clearly played out in Sabarimala and the Ram temple in Ayodya. One may rest assured that no reform or change for the  better will ever come from within the clerical class, God-men,  and corrupt religions – all organized religions are.

It was always not a crowd,  but individuals with ideals, vision, conviction and courage to lay down one’s life, like Socrates, Budha, Jesus, Gandhi, Narayana Guru, who have brought lasting radical changes in society.  Is there any one ready to die for the cause he believes in? If not just forget about any dramatic change for the better in society or organized religions. james kottoor, editor ccv.

On 3 November 2018, a 95-year-old man, Varghese Mathew, died in God’s own country. Unfortunately for him, he died in the theatre of an intra-denominational dogfight between the Orthodox and Jacobite factions of the church. His body was denied burial for 10 days. Here’s why. The grandson of the deceased is a priest of the Jacobite faction.

The burial has to take place in the cemetery legally controlled by the Orthodox faction. How can a priest of one faction, fiercely loyal to Christ, be allowed to conduct the burial service of his grandfather in the other church, which too is fiercely loyal to Christ? Will not Jesus die of a heart attack, and the church collapse in a moral shock at this schismatic impropriety? Aren’t priests employed to fight such battles to the last drop of their blood like mercenary armies of yore? In the end, the secular state intervened and ordered them to end the indignity.

Come Sunday, these very priests will put on holy vestments and preach, their voices quivering with piety, on the duty to love; and love, as Jesus taught, even one’s enemies. They will condemn to hellfire those who don’t. They will, on other occasions, preach even more earnestly on the duty to forgive, not seven times, as Jesus said, but seventy times seven; on showing the other cheek when slapped on one; on losing everything rather than dragging anyone to court, and so on. The astonishing thing is that they will do so without even a trace of unease!

This is nothing new. It has been so from the beginning of organised religion. Max Weber, in Sociology of Religion (1920), identifies the rise of the priestly class as the greatest peril to the integrity of a religion. According to him, the priests hijack and misappropriate the three pillars of religion—scripture, doctrines and rituals—in order to establish their hegemony. What is propagated thereafter, in the name of God, has only one shaping purpose—to promote the interests of the priestly class at the expense of everything else.

“The established church,” wrote Soren Kierkegaard, “is far more dangerous to Christianity than any heresy or schism.” The reality that all should reckon, in respect of institutionalised religion, he argued, is not that some aberrations have crept in here and there. It is that established religion per se is an edifice of aberration. “Think of a hospital,” he wrote, “The patients are dying like flies. Every method is tried to make things better. It’s no use. Where does the sickness come from? It comes from the building; the whole building is full of poison. So it is with the religious sphere.”

When issues like the ‘nun-rape case’ of Franco Mulakkal fame surface, or nuns die under mysterious circumstances, or bitter denominational battles are fought in the name of God over dead bodies, or Christian educational institutions stink with corruption, or women confessants are blackmailed and raped by priests, believers assuage their anguish by assuming these are stray aberrations. No! Kierkegaard would insist.

The entire building—in the case of every religion—has become poisonous.

This is not something that Kierkegaard invented. He owed it to Jesus of Nazareth. Jesus saw greed and extortion thriving in the name of God under the auspices of the Jerusalem temple. He sprang upon the clergy, as William Blake said, like ‘a tiger, burning bright in the forest of the night’. He thundered, “You have made my Father’s house a den of thieves.” The words of Kierkegaard are, in comparison, mild and genial. Believers, not priests, are to blame if they treat dens of thieves as houses of God.

Assume you are an atheist. You don’t believe in God or the soul’s immortality. You are not preached at sanctimoniously by priests on the need to love and be compassionate. You see a dog on the street dead for 10 days. There is a chance that you bury the corpse or alert civic officials to dispose it off. Your conscience has to be in a mortuary of priestly callousness to believe that denying burial to the body of a 95-year-old man is for the glory of God. Or that it will be condoned even in the underworld. Scoffers of religion will find it hard to swallow this. You have to be drugged dead with the opium of priest-peddled bigotry to be able even to contemplate it. Yet we have priests who do such dastardly things with utmost ease of conscience and expect ‘believers’ to applaud them for it. The saddest thing is that they do.

The NHRC in its order on November 12 on the Varghese Mathew case observed, “It is apparent that some people, having some vested interests, are harassing the aggrieved family, which is already in grief as they have lost an elder family member.” Imagine. Harassing a grieving family for the love of God! Now listen to Fr. Konattu, the spokesperson of the Orthodox Church: “How can we say that the entry of the grandson in cassock to the cemetery is a denial of natural justice?” Can an enemy cassock be allowed to enter the cemetery? That’s the main question.

Men and women of faith wake up! These are heartless professionals, in the same way an executioner is a professional. He slips the knot clinically over the head of the condemned by way of doing his duty. Your denominational mercenary-priests, who live lives of hypocrisy serving Mammon while pretending to serve God, are stumbling blocks between you and the freedom to be human. You have only yourselves to blame if you, all this notwithstanding, believe they are practitioners of your faith. If they still thrive by brewing these hell-broths, you are to blame; not those who ply this trade for the coins that tinkle in it.

* Revd. Valson Thampu is an Indian educator, Christian theologian, who was a Principal of St Stephen's College, University of Delhi, Delhi, from 2008 to February 2016. Prior to this he was a lecturer at the college and its officiating principal since May 2007.