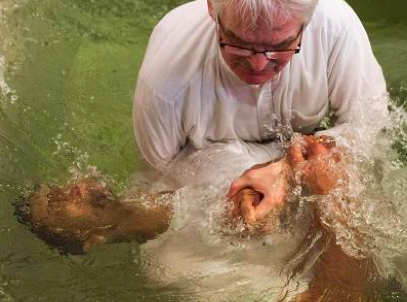 Muslims becoming Christians?  (In the pic: A pastor baptises a Newly converted Muslim refugee – Dec 10, 2016, in Times of India)

Church leaders have confirmed an upward trend in conversions. However, they have not provided statistics about these conversions. The entire conversion process lasts nearly a year. Potential converts are encouraged to weigh their own motivations.

(Note: Proseletizing? Converting? Khar Vapsi? Or deciding by oneself to change one’s religion, own past convictions? These are some of the natural questions that prop up and rightly in the context of what is happening in  India and in the world of competing religions. Apparently it doesn’t look anyone is competing to convert anyone to one’s own religion in Berline, in the present instance.

One of the oft repeated complaints among Christians is “sheep stealing” among different churches and increasing the number of adherents to one’s own church by enticing poor non-Christians through economic assistance, all of which the Catholic church sternly forbids, but is violated by some of the overzealous missionaries.

In India the worst offender in this area seems to be the “Khar Vapsi” gang and the “Love Jihad” group. No sensible people can support their conduct, especially today when the world is moving towards a religion-less world or to a religion of humane humanity which embraces all and gives freedom to believe and practice their religious convictions in private without offending public sensibilities.

In what is being done in Berlin what is most attractive are the following points: 1. No one compels any one to change their beliefs, 2. A testing period of one year is given to prove one’s honesty, motivations and conviction, 3.The church that is in the forefront doing this Good Samariton work is the Free Evangelical Church. 4.Some of them say they are changing religion (even Muslims) in perfect freedom. 5. Some of the converts are motivated  “by a desire to integrate into German society” the host country, which is highly exemplary,

The big problem most countries face in Europe and the Americas is the adamant demand of refugees from Muslim countries is their demand for all freedoms they enjoyed in their own home countries, even in the host countries which offends the culture of the place. These Muslims should take a lesson from what is happening in Berlin and what is done by Angela Merkal for staying put firmly in her open-door policy to all refugees, as desired also by Pope Francis.

So let individuals be left free to choose any religion of one’s choice or none. Most important for refugees is their readiness to accommodate themselves to the customs and cultural practice of their host countries. james kottoor, editor)

BERLIN: Clad in white at a Berlin church, asylum seekers Saeed, Veronica, Farida and Matin were just about to become Christians on a recent Sunday.

"Do you believe from the bottom of your heart that Jesus Christ is your Lord and saviour, and will you follow him every day of your life?" Pastor Matthias Linke asked them. "If so, say yes." All four replied with a frank "Ja", to the enthusiastic applause of the faithful at the Free Evangelical Church, and were plunged head-to-toe into a baptism basin.

"I am very, very happy, I feel… how to say?", said 20-year-old Iran native Matin right after his baptism, placing his hand on his chest. Muslim refugees have recently been taking the same step throughout Germany, where nearly 900,000 asylum seekers arrived in 2015. Church leaders have confirmed a notable, though not huge, trend upward, but have not provided statistics.

"In our diocese, there are several groups of refugees who are preparing for baptism, and there are more and more requests," said Felix Goldinger, a Catholic priest in Speyer, southwestern Germany. Many come from Iran and Afghanistan, some from Syria or Eritrea, he said.

"I am currently handling a group of 20 people but I do not know how many will go through until baptism," he said.
Over the course of their preparations, which last nearly a year in Goldinger's diocese, potential converts are encouraged to weigh their own motivations.

"During this period, it is important that they examine their original religion, Islam, and the reasons why they want to change it," he said. "We are obviously pleased that people want to be baptised, but it is very important for us that they are sure of their decision."

Goldinger said that "many people recall what they have experienced in their country", including "terrorist acts committed in the name of religion. They see Christianity as a religion of love and respect for life." In Iran, said Linke, many had been in contact with unrecognised churches in the Islamic republic, where conversion is prohibited, and then had to flee. 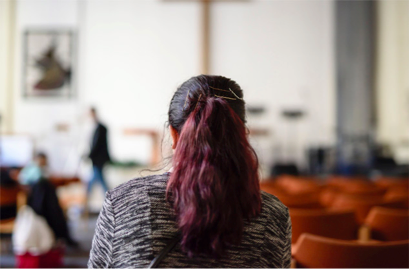 (Afghan refugee Faridah visits a course preparing her to convert into Christianity.)

Other refugees met Christians on their journey to Europe.
This was the case for Saeed, a 31-year-old aeronautical engineer who spent four months in Turkey with a Christian and then became interested in his religion. Like fellow new convert Veronica, Saeed is from Afghanistan. Reading the Bible "helped in times of trouble," he says.

It was in Greece, recalled Matin, that he first came in touch with the Christian faith. After he arrived in Germany, he approached the Free Evangelical Church through his German friends.His sister Farida followed him and they began preparations — in German and Farsi — for baptism.Farida said she "was looking for a church" and wanted to choose her religion "in complete freedom". "This is a very important reason to become a Christian," said Linke.

Among refugees who adopt Germany's dominant religion, he said, "there is a strong desire to decide for themselves, in a free and personal way, the direction of their lives". 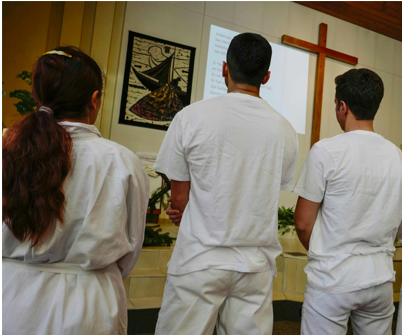 Churches concede that some conversions are motivated by a desire to integrate into German society, or even by the belief that they will increase their chances of gaining political asylum.
Countries that send Muslim converts to Christianity back to their homelands put them potentially at great risk. Apostasy or blasphemy can be punished with jail or death sentences in some Muslim countries, among them Iran, Mauritania, Saudi Arabia and Afghanistan. For jihadist groups such as the Islamic State, conversion is also a punishable sin.
"There are refugees who think that if they convert, it will be easier for them to stay here, but it is not systematic," Goldinger said. "Do they change religion in order to be able to stay in Germany? This is an important issue for the authorities," said Linke, who is often consulted by the state Office for Migration and Refugees.

"I have no guarantees, I can only ask them: 'do you really believe with all your heart?' After their baptism, most of them live as Christians and come to church," he added. Outside their new community, the converts nonetheless usually try to remain discreet. "They may face difficult situations in refugee homes, where the majority are Muslims," said Thomas Klammt, in charge of migration issues at the Union of Free German Evangelical Churches. "They may also be afraid for their families left behind in their country of origin."

This is the real fate of Islam, they have killed others all over the world over centuries… now Islam will itself.Arjuns Gandiva
Matin said he stays in contact with relatives back home — especially his mother, who had "accepted" his willingness to convert. "She calls me every Sunday to ask if I have been to mass," he said, laughing.