(Note:  We received this from Moneynews, Aug.25, 2017 – newsmax@reply.newsmax.com, under the heading “Steve Bannon’s Dark Secret”. We have been discussing about Steve bannon, Catholic and Chief strategist of  US President. It is actually he who got Trump elected, they all say.

Therefore he has been the target of attack by many including the editors of Civilta Catholic, said to be the Pope’s mouth piece. Remember the religio-political alliance the Evangelicals and Catholic fundamentalists formed in the US for the advent of a Parusiaic reign under Trump comparable only to the empire of Consantine of old with all blessings from God.

Only after the shattering confrontation  between white supremists Nazi Ku-Klux-Kan combine and black nationals which resulted in violent collision and one death  at Charlottesville, Virginia, Trump was forced very reluctantly to drop Bannon from the White house. Read previous posts in CCV. What is given below gives logical connection to the rise of Donald Trump as the President of US and what happens now. james kottoor, editor ccv.)

The lingering aftershocks of the 2009 global financial crisis nearly triggered a massive worldwide economic collapse and in the aftermath an illegitimate leader spread his shameful brand of corruption across the land.

Obama put America on a collision course with a deadly historic destiny, even as it inaugurated a vital new president, Donald J. Trump.

The weak were offended when President Trump talked of the carnage that’s spread across America and its lost exceptionalism.

But, President Trump knows the dark secret of why America is teetering. His closest adviser, Steve Bannon, exposed the cruel reality in a powerful film he produced before going into the White House.

Bannon’s film — called Generation Zero — reveals the crisis that will soon beset America . . . and why the moment may be fleeting to make dramatic changes.

The big media like CNN and the major networks won’t talk about the facts that were revealed in Bannon’s documentary film — Generation Zero — but the truth cannot be silenced and the film has become a secret folk hit for its accurate predictions and stark warnings about America’s economy and future.

Generation Zero says that America remains close to the brink of total calamity after years of quantitative easing, helicopter money, and our national debt doubling under Barack Obama.

The horrifying implications of this are revealed powerfully and honestly in Generation Zero. 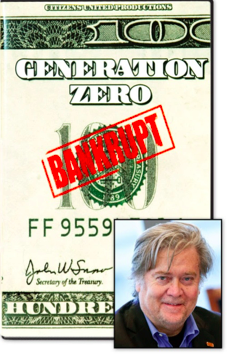 Generation Zero also argues that America is in its “Fourth Turning” stage — a generational cycle that has already affected our history in amazing ways.

A Turning is one of four consecutive 20-year cycles.

When the “Fourth Turning” strikes, calamity is close behind . . . history does not lie.

America’s first Fourth Turning occurred with its war for independence, a bloody struggle that created the new nation.

This was followed almost 80 years later by the Civil War — a seismic event that saw millions die.

Some 80 years after that another Fourth Turning slammed us — the Great Depression and World War II.

Now, in Generation Zero, Bannon says another Fourth Turning has just begun — a great calamity that will decide our fate for generations to come.

Each time in history America has faced down such calamities, but we did so with inspirational leaders like George Washington, Lincoln and even FDR.

These inspirational leaders were able to usher in a new “Awakening” that made America better and stronger.

Today, Donald Trump has entered the stage as that inspirational leader.

Generation Zero reveals the dark secrets and identifies the bad actors that have led America to the brink.

Bannon says we still face economic Armageddon, but Donald Trump alone stands between us and the abyss.

Generation Zero reveals the key signs that prove a Fourth Turning has started, and the attributes of the leader who can take America back to the Promised Land.

Remember the dot-com bubble that burst in 2001? It was the biggest economic meltdown in all of history. Trillions were wiped out overnight.

The solution by the swamp-dwellers?

Another bubble — based on massive quantitative easing in the Federal Reserve and EVERY major central bank in the world. It was the greatest artificial creation of money mankind has ever known.

Generation Zero shows that another titanic bubble has been created, the most gigantic in history.

Bannon warns this is about to burst soon, unless President Trump’s policies are implemented and a new “awakening” ignited.

He shows what an inspirational leader like Trump can and must do to save America.

Their message has serious implications for your wealth, your family, for assets like your home, your retirement stocks, your bonds — and the value of the dollar and gold.

Get Your FREE Generation Zero DVD!