Gender equality impossible in Church? Why not have a woman run a diocese? Note: “God created man, male and female, in God’s own image and likness”, is the first article of Faith, Christians believe and profess. That no one believes any more in this creation story today, is the tragic comedy. That is the yawning gap between belief and practice, as wide as North and South poles!

What is fundamental for Christians? Is it to close their eyes and recite the Creed,  starting with: I BELIEVE? Actually what does it mean when one says that  if not: “I refuse to use my light of reason;  I have put it in cold storage; I am all set to walk in pitch darkness using “that dark light called FAITH (Rahner)” and shall reach the shores of heaven most comfortably?”

The  blind leading the blind is sure to fall in the ditch, is another truism, but who cares? “Why can’t the lion I caught have two horns?” one can ask once reason is given a go-by. Doesn’t  the bible also say the truism: “The fool says in his heart, there is no God”(Psalm: 14, 1). It is another matter that those who walk with their eyes wide open see it read as: “The fool alone says in his heart there is God!”, just the opposite.

This question becomes all the more important today in the context of gender equality discussed for 12 long years in the Supreme Court and finally delivered as prized pearl. Even in this  “most religious country like India”,  our die-hard Hindu brothers (the RSS brotherhood) can neither swallow or digest it. Of course that makes the church-going blind believers  pat themselves on the back saying: “We are in good company!”

It’s too complicated a topic to explain convincingly in two  or three paragraphs. That would be another foolish thing to attempt here. But just recall the highlights in the long distance the church has covered in the past centuries. First it was the “Holy Father Church”(patriarchal totally); Rome(Pope) has said and the case is settled! After so many ecumenical councils it reached the Vatican II, which defined at least in theory, that Church is  “Collegiality, coresponsisbility and subsidiarity”, but not in practice.

Presiding over the concluding session Pope Paul VI asked: “Where is half of humanity?”at not seeing any ladies in the assembly. Simultaneously the womens’ ordination battalion has been clamouring for women priests and equality in leadership positions, all in vain to this day. We saw recently the youth synod’s performance with no active participation and voting rights, with one solitary lady cleric allowed to speak openly.

Will it be different in the forthcoming, February synod? Nope! That is the prospect,  in spite of all the talk of “Synodality” and decentralization of the Church, the pet concerns of Pope Francis! He had even spoken of turning the Pyramidal hierarchical structure upside down, putting himself one step below the laity. Are they not all nothing more than just tall talk to fool the public, for the moment?

It is in this context one wisely-crazy or crazily-wise wit shot out the breath shaking comment to silence all arguments: “There would be gender equality in the church, only when we have a pregnant Pope!” Any counter arguments to demolish it? We leave it to Sabarimala Ayappa Bhaktas, for whom menstruating women is an aberration to a celibate Deity!

What about Jesus’ Mother?

After all wasn’t Mother Mary, a lady herself, the most honoured person in the Catholic Church after Jesus who brought forth Jesus in flesh and blood? If so what better claim  the men folk has to bring him down even sacramently on the Altar?  Can male priests deliver? Any rhyme and reason in their argument confining priesthood to men alone?

How long shall we indulge in such foolish and irrational arguments on priesthood which Jesus is supposed to have taken up? Could Jesus think of becoming a priest, after piercing the high priests of his time to shreds with his arrows: “You hypocrites, white washed sepulchers… etc.” If he did that, that is, became a high priest,   shouldn’t he be called a  bigger hypocrite?

So there is no wonder if writers like Phyllis Zagano  are clamouring for ladies to run  whole dioceses. Think of lady heads of states like Angela Merkel of Germany,  Teresa May of UK, our own Indira Gandi, lady  Chief ministers and Excecutives of big companies. When will Churchmen learn from their secular counterparts?

The heavens are not going to fall if and when ladies become diocesan executies. “Fiat justitia, ruat caelum,” (Let justice be done, even if the heavens were to fall.) Carthage (gender inequality) must be destroyed, if you believe God created, male and female equal, also even if you don’t believe in such a creation story!  james kottoor, editor ccv.

There's been a lot of talk about women in church leadership. Any cynic will remind you not much has happened. Even so, the pope has made it clear he wants to have women where they can make a difference. 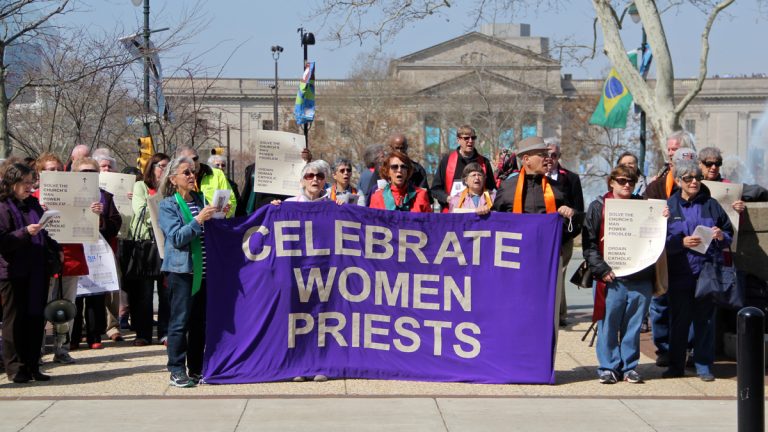 The members of the recent Synod of Bishops agreed: "An area of particular importance … is the presence of women in ecclesial bodies at all levels, even in positions of responsibility, and the participation of women in ecclesial decision-making processes, respecting the role of the ordained ministry."

How about putting women in charge of a few dioceses?

There are dioceses all over the world without bishops. There are many competent churchwomen — chancellors, former general superiors, Catholic Charities heads, for example — who could easily run a diocese while the Congregation for Bishops and the pope decide what's best down the road. In the United States alone, there are seven or eight vacant sees. One already sets the example.

When Baltimore Archbishop William Lori became administrator of the Diocese of Wheeling-Charleston, West Virginia, he appointed Bryan Minor as his "delegate of administrative affairs." Minor, a 49-year-old married father of four, was the diocese's human resources director and headed its West Virginia Catholic Foundation. Now he manages all of Wheeling-Charleston's day-to-day operations reporting to Lori, who is the last stop for major decisions and who oversees matters involving sacraments and clerics.

What is happening in West Virginia is not the same as what happens when a parish needs a leader and the bishop, following Canon 517.2, "has decided that participation in the exercise of the pastoral care of a parish is to be entrusted" to a non-priest (a deacon or a layperson). But it is similar.

Only a priest may be administrator of a diocese or a parish. But Canon 517.2 allows for pastoral life coordinators or parish life directors who supervise the parish's ministerial efforts and financial matters, contracting clerics for the parish's sacramental needs. Somewhere in the diocese, there is a canonical pastor, but in the best of scenarios, the deacon or layperson is in charge.

Why? There are competent, prayerful people well-trained to take over. Why not maintain the vibrant small parish with a deacon or a layperson to keep the community going?

And why not give dioceses (and the church universal) the benefit and inspiration of a woman caretaker while episcopal nominations and paperwork float around the Vatican?

Not everyone can run a parish. Not everyone can run a diocese. But something needs to be done to highlight the fact that women are leaders too. The people of God are asking: Why not? They are asking a lot of other questions. When there are no answers, when hope for responsible leadership and management disappears, women are out the door. And every woman who leaves the church brings her husband and children with her.

If there is to be a serious effort to salvage the sinking barque of Peter, more women need to be involved. It is as simple as that. Even San Francisco Archbishop Salvatore Cordileone reported to the assembled U.S. Conference of Catholic Bishops that a common response to the sex abuse crisis is that it would not have happened if women were in charge.

The synod supported women in leadership but recognized such could only "be implemented through a work of courageous cultural conversion and change in daily pastoral practice."

[Phyllis Zagano is senior research associate-in-residence at Hofstra University in Hempstead, New York. Her books include Women Deacons: Past, Present, Future (recently published in Canada as Des femmes diacres) and The Light of the World: Daily Meditations for Advent and Christmas.]