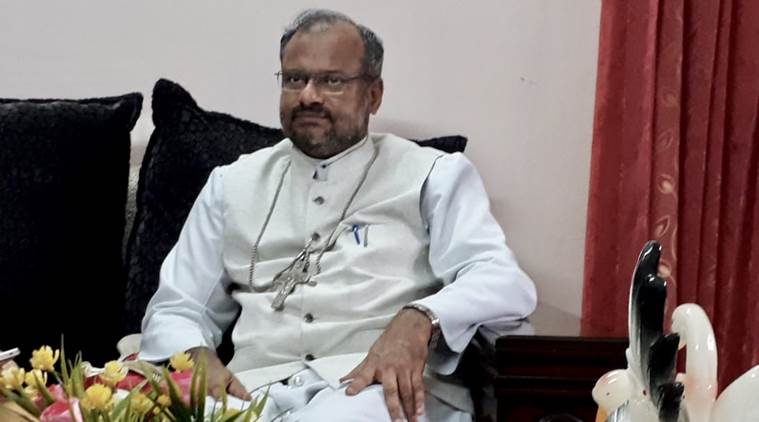 Jalandhar bishop Franco Mulakkal who said that Nun is lying, rape charge against me a conspiracy by those against church. Express photo.

Blitz, the weekly brought out by R.K. Karanjia, had three Fs on its masthead – Free, Frank, Fearless. The blitzkrieg that has hit the Catholic Church in India over the last couple of months could verily use another set of three Fs – the Frightening Franco Fiasco. It is frightening because of the incalculable harm, and in some cases, irreparable loss, to the otherwise “goody” image of the Catholic Church in India. It was a fiasco because of the fumbling, bumbling silence of the CBCI and the Papal Nuncio in India.


Our image was partially redeemed by what I believe was the personal intervention of Cardinal Oswald Gracias of Mumbai, who is one of Pope Francis’ inner circle, as also the President of the CBCI. This resulted in Bp Franco Mulakkal of Jalandhar being eased out of office, albeit “temporarily” and the cardinal’s handpicked choice being appointed as the apostolic administrator of the diocese.


Sriman Franco (I will no longer call him a bishop) could have quietly resigned when serious allegations of rape were brought against him by a former Superior General of the Missionaries of Jesus, a small diocesan congregation totally under his jurisdiction. He would have spared the community much embarrassment and adverse publicity. His obduracy resulted in the victim seeking justice from ecclesiastical authorities, where she was banging her head against a wall. Ultimately she had to take recourse to the due process of criminal law. Even that had an inordinate delay, resulting in her sympathisers resorting to a protest dharna in Kerala that again riveted media attention.


The Franco Fiasco has split the community, with some vociferously defending him, and others baying for his blood. The “Defenders of the Faith” seem to believe that a bishop can do no wrong. A senior Christian journalist went to the extent of dubbing the alleged victim as the villain of the piece. They have questioned the delay of four years in speaking up, and wondering how she could have been “raped” 13 times without her consent.


On the other side of the divide were those “moralists” who felt that the bishop could have stepped down immediately, and the Nuncio and the CBCI should have asserted their moral authority to ensure the same. I too have held a similar view in the ongoing debate. Now that the matter is sub-judice one cannot and should not comment on the merits of the case. But we are at liberty to retrospect on the events that unfolded prior to Sriman Franco’s arrest. What merit was there in those supporting Franco? Can a bishop do no wrong? Is he not as human as anybody else? Bp Willie Gomes of Poona was removed because he had a mistress and a child by her. There are strong allegations against Bp Gallela Prasad of Kadapa, Andhra, that he too has a wife and a son by her, and has transferred valuable properties to them. The Catholic world has been rocked by clerical sex abuse scandals from Chile and Australia in the south to the USA, Ireland, Holland and Germany in the north. The skeletons keep tumbling out of the cupboard.


As for the delay in revelation, the latest cases of “Me Too” are actress Tanushree Datta, who has now claimed that she was sexually assaulted by actor Nana Patekar ten years ago. Similarly, celebrity Padma Lakshmi, ex-wife of Salman Rushdie, has recently revealed that she was raped by her boy friend when she was just 16, and doesn’t want her daughter to suffer the same fate.

What of the consensual aspect? The Indian Penal Code (IPC) is very clear in what is deemed consensual or constrained. It defines rape, among other circumstances, as “with her consent when her consent has been obtained by putting her or any person in whom she is interested in fear of death or hurt” (IPC 375). We may here note that the alleged victim had repeatedly complained of threats to her and her family members. So such consent, if any, would still be deemed to be rape.


This offence becomes more grave when “a public servant takes advantage of his official position and commits rape on a woman in his custody as such public servant” (IPC 376:2b). So a person in authority, like a bishop dealing with his diocesan congregation, has removed the element of consent from the relationship. From initial police reports we have been informed that he called the sisters singly in the night on the third Friday of every month for purported “spiritual guidance”. The manner in which this diocesan congregation has now gone on a fast in support of the “innocent” bishop, and not the alleged victim, is indicative of who is controlling the scene.

The legality and criminality apart, what really concerns most of us is the morality of the case. The CBCI Secretary General, Bp Theodore Mascarenhas, clarified that the CBCI had no jurisdiction in the matter. Morality was being replaced by legality. But Canon Law has this to say: “A cleric living in concubinage, and a cleric who continues in some external sin against the sixth commandment of the Decalogue which causes scandal, is to be punished with suspension. To this other penalties can progressively be added if after a warning he persists in the offence, until eventually he can be dismissed from the clerical state. A cleric who has offended in other ways against the sixth commandment of the Decalogue, if the crime was committed by force, or by threat, or in public, or with a minor under the age of sixteen years, is to be punished with just penalties, not excluding dismissal from the clerical state if the case so warrants” (Can 1395:1&2).


The Catechism of the Catholic Church (CCC) is equally forthright. “Rape is the forcible violation of the sexual intimacy of another person. It does injury to justice and charity. Rape deeply wounds the respect, freedom and physical and moral integrity to which every person has a right. It causes grave damage that can mark the victim for life. It is always an intrinsically evil act” (CCC 2356). “Fornication is carnal union between an unmarried man and an unmarried woman. It is gravely contrary to the dignity of persons and of human sexuality which is naturally ordered to the good of spouses… It is a grave scandal when there is corruption of the young” (CCC 2353). “The sexual act must take place exclusively within marriage. Outside of marriage it always constitutes a grave sin and excludes one from sacramental communion” (CCC 2390).


Hence I wonder how the CBCI and the Nuncio did not take cognizance of the explicit teachings of the Church? By way of explanation I may here make the distinction between fornication and adultery. The biblical understanding of adultery is violation of the rights of a married man over his property, his wife! Even the IPC followed this norm (IPC 497) until it was struck down by the Supreme Court. In contrast fornication is any sexual act between persons neither of whom is married. This in no way detracts from the morality, or rather immorality, of the case at hand.


Looking ahead we also need to find a solution to what has now become a scourge in the Catholic Church. I am a married man, and I am deeply committed to Jesus and his Church. Living in civil society I have come across umpteen devoted persons, who let alone being Christians, are even atheists. They are bound to the causes that they espouse, making great sacrifices, and sometimes even paying a heavy price for what they believe in. I do not see celibacy as a “superior” way of loving God and serving people. To the contrary celibacy, if it results in suppressed sexual desire, can be one of the root causes of what now ails the Church. It has no scriptural basis and it should no longer be retained as a pre-requisite for the Catholic priesthood.


The second course correction is the much needed balance of power. I could write reams on this. Let it suffice to say that absolute power corrupts absolutely. There are existing provisions in Canon Law for participatory structures like pastoral councils, finance committees, Catholic Associations etc. If implemented in the correct spirit they could restore some level of parity in the Church.


There is now an urgent need for a Grievance Redressal Mechanism. When George Menezes, the then National President of the All India Catholic Union, organised the first National Convention of Catholics in Mumbai in 1989 there was a strong demand for setting up Arbitration Boards in every diocese. Bp Patrick D’Souza of Varanasi tried to water it down by calling them Conciliation Boards. Even that has not happened. Arbitration or Conciliation, by their very nature, are restricted to civil or financial matters. But criminal acts require a Grievance Redressal Mechanism, that could even recommend criminal prosecution if prima facie guilt is established.


Rome was not built in a day. The reforms of Vatican II took years to be expressed, and largely still await implementation. This should not deter those enlightened persons who have the good of the Church at heart, to speak out, to stand up and be counted. Else we will be having a repeat of the Frightening Franco Fiasco. Hence, like Blitz, we need to be Free, Frank and Fearless.


*The writer is the National President Emeritus of the All India Catholic Union.

NDTV report dated 22 September 2018 by Sneha Mary Koshy mentioned of shocking details from the witnesses' statements. Franco Mulakkal had started a new method of worship called "a day of prayer with the Shepherd", when nuns had to come to the pastoral centre on the third Friday of the month and return only on Sunday. Between 9 pm and 10 pm on that day the nuns had to go to the Bishop to share their personal problems and that is when he misbehaved with them.