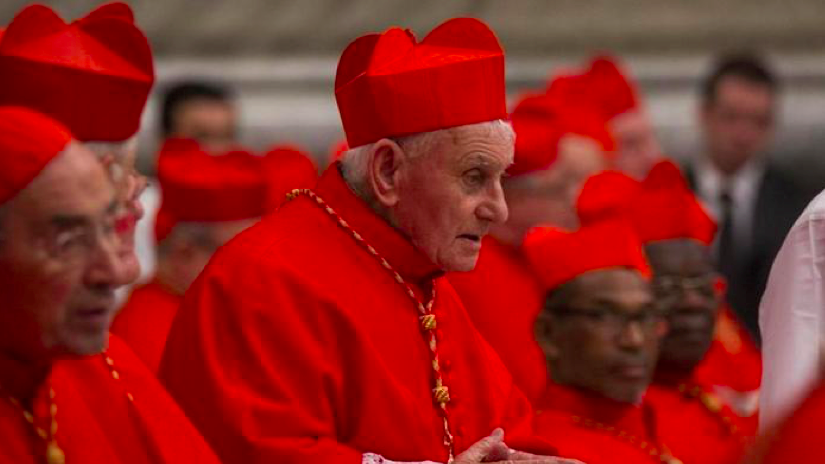 The newly-elected cardinals received their "courtesy visits" this afternoon. These men of the Church hail from countries such as Albania, Syria and Venezuela, that have been the scene of past and present tragedies (Published in Vatican Insider). In the pic: The newly-elected Albanian cardinal, Simoni

(Note: Most important to note in this report is that Pope Francis is racing against time to finish the plans he has in mind before he has to bye out of this world.

A consistory with the voting strength of 115 elected both Jorge Bergoglio and Joseph Ratzinger. With the latest batch of cardinals he has brought the number of electors to 121, six more than the number that elected him.

regions affected most by war and violence, to show his concern for the suffering humanity.

This is because "the virus of polarization and animosity present in the world should find a place in the heart of the church.” But we hope and pray that Francis lives much longer that he fears.  james kottoor, editor)

Today's (19/11/2016) Consistory takes the number of cardinal electors to 121 (there were 115 both in the 2013 Conclave that elected Jorge Mario Bergoglio and in the one that elected Joseph Ratzinger).

In percentage terms, since 2005, Europe has gone from 50,4 to 44,6, North America from 12,2 to 14, Mexico, Central and Southern America from 16,5 to 14, Africa from 9,6 to 12,4, Asia from 9,6 to 11,6 and Oceania from 1,7 to 3,3. These percentages, at least in part, show that the composition of the College of Cardinals is more in line with the geography of the Catholic world, which is notoriously concentrated in Latin America, is growing in Asia and Africa and declining in the US and Europe.

Cardinals therefore come from all over the world and often from countries that are affected by violence and war. The Pope talked about this during this morning's ceremony, underlining that the Church needs to take care lest "the virus of polarization and animosity" present in the world "finds a place in our hearts, because this would be contrary to the richness and universality of the Church, which is tangibly evident in the College of Cardinals.

“We come from distant lands; we have different traditions, skin colour, languages and social  backgrounds; we think differently and we celebrate our faith in a variety of rites. None of this makes us enemies; instead, it is one of our greatest riches."