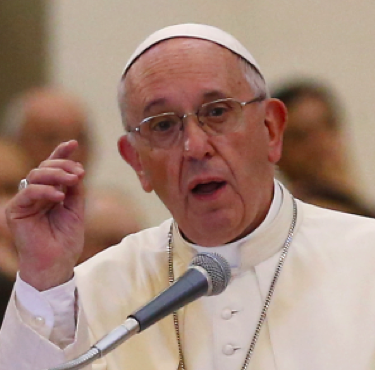 Pope Francis has unequivocally criticised gender theory and the encouragement of the idea that individuals can choose their own gender.

(Note: Pope Francis is considered to be a very frankly speaking and liberal thinking person. Even he is now talking a lot of things related gay people behind closed doors. That is a clear sign that this issue of being GAY, that is, being in conflict with ones own physical sex, continues to be a subject riddled more with confusion than clarity. On the one hand the accepted Catholic teaching is that man without woman is incomplete and woman without man too is incomplete, each without the other is only a piece of humanity, incomplete. In gay relations one’s natural attachment is to the same sex and to the extent it is natural (beyond one’s ability to resist and overcome) it is Godly or Godgiven and

therefore to be respected and revered, not condemned. Caught in this circle of natural attraction, the question of one’s choosing one’s gender doesn’t  or ought not arise. Is this what the Pope refers to as the ‘sin against creator?’ It looks more time and deliberation on the various facets of the issue is needed to resolve all conflicts. james kottoor, editor.)

A transcript of his closed-door conversation with the Polish bishops during his visit to their country for World Youth Day reveals his dismay regarding the theory, particularly its impact on children, and sparked in turn criticism of his response from LGBT activists.

“We are living a moment of annihilation of man as image of God,” he told the bishops. “Today, in schools they are teaching this to children – to children! – that everyone can choose their gender.”

The Pope condemned what he called “ideological colonising” backed by “very influential countries” and textbooks supplied by “persons and institutions who donate money”. The “first and last name” of this colonisation, he said, “is gender”. Pope Francis then referred to conversations he had had with Pope Emeritus Benedict on this issue.

LGBT groups in the US were the first to respond. Francis DeBernardo, executive director of New Ways Ministry, a Catholic LGBT advocacy group, said that the Pope was ignorant about LGBT issues. “Nobody chooses a gender identity. They discover it. Transgender people come to know themselves in a process similar to the way that lesbian, gay, and bisexual people discover their sexual orientation,” he said.

However in March this year, the American College of Paediatricians issued a position paper entitled “Gender Ideology Harms Children”, warning against the physical and psychological dangers to children posed by advocates of transgenderism. Failing to identify with one’s biological sex signals a psychological disorder that must be dealt with and not pandered to, they argued.

Asked whether he agreed with Pope Francis that it was “terrible” that children in schools are being taught that they can choose their gender, Paul Barber, director of the Catholic Education Service, said it was important to remember the context in which Pope Francis was speaking, “in a Q&A session in Poland”. “In Eastern Europe,” he said, “there is a tradition of schools being completely controlled by the state. The [communist] legacy lives on.” In England and Wales, he pointed out, “we have more diversity. We don’t have that central control. This is not the context in which Catholic schools operate … we have control of the curriculum.”

Asked whether he agreed that we live in an epoch of “sin against God the Creator”, he said that the teaching of the Church on these matters was well set out in the Catechism of the Catholic Church and that the Youcat catechism was a useful guide for younger people.