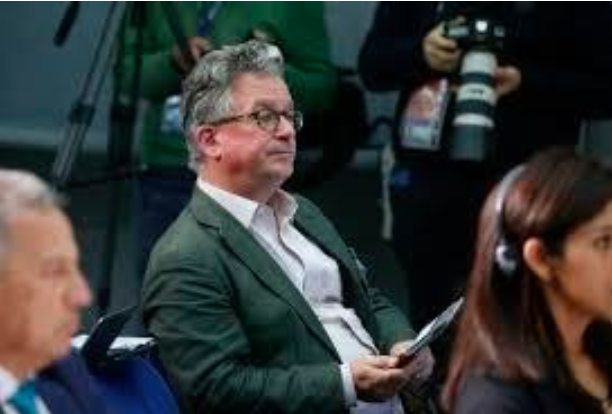 In the pic: Journalist and author Austen Ivereigh attends a news conference after a session of the Synod of Bishops for the Amazon at the Vatican Oct. 22, 2019. (Credit: Paul Haring/CNS.)
Cindy Wooden, in    CATHOLIC NEWS SERVICE   Oct 28, 2019

Note: For many Pope Francis is too liberal, for others too conservative! Which is the truth? He is neither, he runs in the middle path because ‘Virtue stands in the middle’(Virtus stat in medio).

This article based on a biography of Francis, by Austen Ivereigh, to be published soon,  seems to capture the vision of the Pope’s herculean effort to bring about a reform according to the path Jesus  set out for his followers. It is radical conversion of the heart and mind of the people of God, not external structures, planned and modified by church men to suit their comfort and advantage.

In an earlier post: “Church must die to resurrect” we pointed out that dying and coming back to life to live as the Church did before, (sicut erat in principio) indulging in all sorts of criminalities  — criminal silence of all sorts of sex abuse, criminal cover up of all such abuses including personal amassing of wealth and criminal climbing by clerics on the hierarchial ladder —  will never bring the intended reform.

To achieve that what is needed is real conversion of mind and heart of both clergy and laity – yes  starting with the total abolition  the present sharp man-made divide into Hierarchy and laity, a monstrosity, because Church is to be the PEOPLE OF GOD, in the literal sense of “You are all brothers only”(Mt.23, 8-12) Without this foundation as envisioned by Jesus, no reform is ever possible!

Francis started it, not by preaching through encyclicals, but showing it by his own examples: “I am a sinner!” just like any of you, “Please pray for me”, Living in a rented two-room St.Martha’s rentend home and the litany is too long to name here.

To do that what is needed is CONVERSION of heart to serve, “the son of man came to serve, NOT TO BE SERVED!” Do you need any clearer example and exhortation? Do we need a Solomon to understand this? Any  illiterate can! He was himself an Illiterate par exemplar, never went to any school to take doctorate in scriptures and theology, lived with the illiterates and marginalized! What place has that JESUS and his example in any of the Churches? Is not CONVERSION, conversion, conversion needed all the way forward!

“I am the WAY” didn’t he say it and show it? I too was on the high ways and byways after saying good-bye to priesthood. My well wishers used to ask me then with concern and the best of intentions: “What are you doing now james?”  My reply always was: “I am on the WAY!” I meant it. Of course, no one who heard understood it! I am still trying to be on THE WAY! His WAY! I am going at a tangent, so I stop.

What is conversion? It differs from person to person. But basically it consists in being honest with oneself in three fold ways: honest to God, honest to oneself and honest to one’s neighbor! What about those who  don’t belive in a God? There is no one who does not belive in GOODNESS. So long long ago I changed the saying: “To those who love God in to GOOD: “To all those who love GOOD, everything turns out for the Good!”

You don’t have to accept my vision, but this is what guides me!As I understand JESUS wished the GOOD of all humans, starting with the last, least and lost. The good shepherd goes after the lost sheep. Hence Francis questions: If the Church is not for sinners, whom is it for? Not for the married and separated, not for the civilly married, not for living together couples, not for trial couples? Then who else is left  in this world? The reluctant celibates who live double lives?

Hence his definition of God: “MERCY PAREXELLENCE!” Does it make any sense? Are not both the Pope and Prostitute, the drunkard and the teetotaler, the prodigal and faithful, equally children of God, if there is a God? To which will He waiting anxiously with open doors, standing at the main gate looking far ahead to catch a possible glimpse of is prodigal daughter or son returning home? Just think of it, what conversion ought to mean! james kottoor, editor ccv.

ROME – Following up on The Great Reformer, his biography of Pope Francis, Austen Ivereigh is convinced that conversion is “the deepest reform” and is a process Francis is trying to facilitate.

Ivereigh’s latest book is Wounded Shepherd: Pope Francis and His Struggle to Convert the Catholic Church, scheduled for release in the United States Nov. 5 by Henry Holt and Company.

Discussing the title with reporters in Rome Oct. 23, Ivereigh clarified both what he means by “wounded shepherd” and what he believes Francis sees as his role in the conversion process.

The title was chosen at the end of 2018, which Ivereigh described as “the annus horribilis” (horrible year) of Francis’s pontificate mostly because of the clerical sexual abuse crisis and the mishandling and cover-up of allegations that were revealed in Chile and the United States with the case of Theodore E. McCarrick, the former cardinal.

The publisher wanted a title that reflected “the fact that he was being attacked.” Ivereigh said he agreed to the title, not because of some political battle at play, but because Francis has spoken several times about the Church and its ministers recognizing their woundedness, seeking forgiveness and taking a step toward conversion.

The subtitle, he said, is an acknowledgment that “conversion” is the theme of the book and refines the title of his earlier biography because “I’ve come to learn that the deepest reform is really conversion.”

Francis is “a very Jesuit pope leading the Church on the Spiritual Exercises (of St. Ignatius),” Ivereigh said. “Of course, it is not the pope converting the Church, as I make clear in the book. A spiritual director isn’t the one who changes the person who is on retreat. The spiritual director provides the space, the guidance, points out the obstacles and temptations. It’s God and the Holy Spirit who produce the change.”

Ivereigh met with the pope for 45 minutes in June 2018, he said; it was not an interview, but a conversation that helped in the writing of the book.

“It’s completely my take on this pontificate,” he said, although he did speak to many people “close to the pope.”The book, he said, uses several events and issues to illustrate how the pope is trying to help all Catholics and the Church as an institution come closer to Christ and to living in a Gospel style.

Wounded Shepherd begins with a biographical chapter, framed by Francis’s visit to his family in Turin, Italy, in 2015. Then it turns to issues: the 2017 controversy within the Knights of Malta; efforts to reform Vatican finances; the ongoing reform of the Roman Curia; the clerical sexual abuse crisis; evangelization; ecology; his vision for Latin America; the synods on the family in 2014 and 2015; and the message of mercy and pushback to it.

“Synodality” – the process of listening to all voices, discussing and even arguing about issues, praying about them and allowing consensus to form – may be Francis’s greatest contribution to the Catholic Church, Ivereigh said.

But mercy is “the heart of the pontificate, the heart of the Gospel of Jesus Christ according to Pope Francis,” the author said, and that is why he used the chapter to close the book.

Mercy also is “where the opposition (to Pope Francis) is at its most aggressive and vicious,” he said. “He is a pope who has provoked intense opposition, just as Jesus did.”

Those who criticize Francis do so from a variety of positions, he said, but “it’s quite striking” to study the stories about the Pharisees’ opposition to Jesus in the Gospels and notice the connections and, especially, how afraid they are of Jesus.

“There are people, I think, who so badly misread the pope because of what is going on inside them,” he said. “I think Pope Francis has deeply threatened people who consider themselves good and consider themselves the guardians of Catholic doctrine.”

For the Pharisees, and perhaps for many of Francis’s critics, he said, the sticking point may be that “Jesus proclaims the universality of God’s love, that religion cannot be arrogated to become an identity which is then used against people and as a way of defining me against you and, therefore, he effectively takes away their power. Or at least they feel that way.”