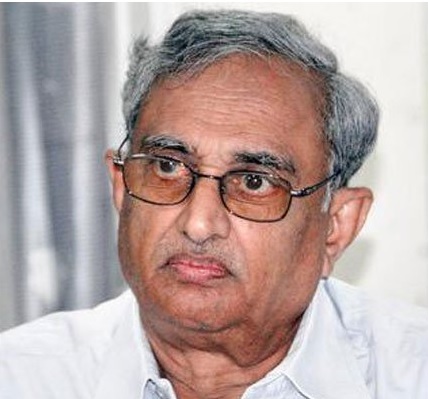 (Note: It looks, that a systematic discussion of Modij’s demonetisation has only just begun.  Yesterday we published two letters, from GroundReport India, addresse

d to the PM on Dec.4th and 6th by a very competent person Dr. EAS Sarma, former Power Secretary to Government of India. He is a political activist for a corruption-free India. He has not received answers till now. Studied questions – especially inconvenient ones — from knowledgeable persons are not easy to answer.

Today we give below an elaborate description of his educational background in India and US, and his government service background in India. We look forward to more such people to come forward to take part in this discussion on demonetization which is costing India an awful lot.  The report below is from Times of India.

What is to be noted is that Dr. Sarma asks many inconvenient questions like: Is there different sets of rules for the very rich whom Modi’s whip doesn’t touch whereas the very poor are tortured. Very rich like Janardhana Reddy or (Nitin) Gadkari are not subjected to raids for black money, although it is clear they have any amount of black money while the poor are punished to stand in serpentine queues, or their offices are raided. All political Bigwigs attend the weddings of the super rich and become complicit in their crime. So, has Modi different rules for different people?

People will be watching how the PM manages to wriggle out of this kind of questions with a trap. If he fails to answer convincingly, the possibility is that his downward slide in popularity from the Delhi election will continue and the voters in UP may bring that popularity to zero. For a better result in UP the PM per force has to give convincing answers to questions raised by Dr. Sarma. We hope he will. james kottoor, editor).

VISAKHAPATNAM: Dismayed by the manner in which politicians are spending immense sums of money on their children's wedding at a time when the common man is standing in queues to collect cash from banks and ATMs, former union energy secretary EAS Sarma  has shot off letters to Prime Minister Narendra Modi, Congress vice-president Rahul Gandhi and enforcement directorate chief Karnal Singh demanding investigation into possible use of black money at these lavish weddings.


In a letter to PM Modi on December 6, Sarma wrote, "Though the income tax authorities had raided small businesses and traders post-demonetisation, not one of them had the courage to raid the premises of (Gali) Janardhana Reddy or (Nitin) Gadkari who too has celebrated a similar wedding in great extravagance. Were the local senior officers of CBDT 'honoured' guests at the lavish weddings celebrated by these VVIPs recently?"


Furthermore, he wrote, "Mr Modi, while the demonetisation mission launched by you is a commendable step forward, if it is established that your government is complicit in letting the money launderers off the hook, the credibility of what you have done in the name of demonetisation will certainly come under public scrutiny. May I demand quick action even at this belated hour to demonstrate your willingness to fight the black money hoarders."


At the same time, in a letter to director of enforcement directorate Karnal Singh on December 1, Sarma wrote, "These weddings would not have been celebrated without the deployment of large amounts of cash, which the common man/woman on the street is finding difficult to raise in view of the numerous restrictions imposed by the finance ministry and also the shortage of cash that prevails across the country. How could Janardhana Reddy and Mahesh Sharma explain the lavishness with which they celebrated the weddings in their respective families? Either they had unaccounted cash or they have received undue favours from some business houses and contractors. I feel that the ED should investigate these weddings independently and file cases against the concerned, if necessary."

Earlier, in a letter to Congress vice-president Rahul Gandhi on November 17, Sarma wrote, "It is distressing to note that your party is equally guilty of endorsing the lavishness with which Gali Janardhana Reddy, a former Karnataka minister, is celebrating his daughter's pre-marriage functions. Would Congress acquiesce in one of its own leaders marking his presence at such a highly objectionable display of conspicuous consumption at a time when millions of ordinary Indians are struggling to draw meagre cash from their own legitimate accounts in the face of demonetisation? Would Congress consider expelling the Karnataka leader from the party for this?"

Who is Dr EAS Sarma?

Dr EAS Sarma, 1965-batch IAS officer of the Andhra Pradesh cadre, was transferred 26 times in his 35-year tenure as a bureaucrat because of his refusal to toe the government line on policies he believed to be anti-people or unconstitutional.

He served as secretary in the Ministry of Finance (between 1999 and 2000) and quit over differences with the AB Vajpayee-led National Democratic Alliance government over public policy issues.

Post-retirement, his public interest litigation along with sociologist Nandini Sundar, historian Ramachandra Guha and others eventually led to the Supreme Court declaring the Salwa Judum – a private militia to fight the Maoists in Chhattisgarh – unconstitutional.

He had earlier been a member of the expert group constituted by the planning commission to study “development challenges in extremist-affected areas” and later moved “the Supreme Court because neither the Centre nor the state government acknowledged our findings on the war in the heart of India”.

During the United Progressive Alliance government’s tenure, Sarma also wrote regularly to then Prime Minister Manmohan Singh on various issues, including what he considered as the flawed government policy on Krishna Godavari basin.

Sarma is a post-graduate in nuclear physics from Andhra University and in public administration from Harvard University. He also has a doctorate from IIT-Delhi.Sarma has been fighting against projects affecting environment and public health, including the setting up of power projects along the coastline and illegal mining in Adivasi areas.

This is the text of the letter he has written to Prime Minister Narendra Modi on the latter’s policy initiatives against black money.(EAS Sarma, Visakhapatnam)