Forgetful God, ours? Forgive As Though You Have Forgotten 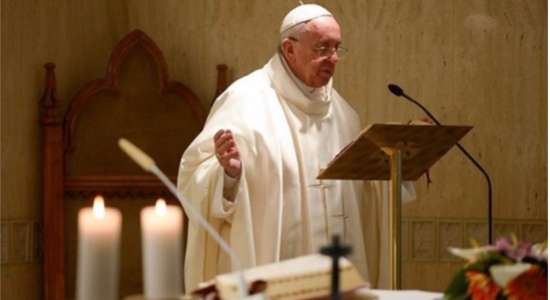 At Casa Santa Marta, Says Lent Is a Privileged Time to Prepare Our Hearts to Imitate God’s Infinite Forgiveness

(Note: What do we say often? I forgive but I can’t forget. First    Francis said our God is one who does not know how not to forgive,  One who is never  tired of forgiving. It is we      who are tired of    asking pardon.  So the name of our God is Mercy or Pardon. Now he says, He is a forgetful God. After all what is sin, except the stupidities or blunders we make like little kids falling down while learning to walk and we  go on making such blunders till  we die. None of us can, nor have the    capacity   to offend God, which is called sin. It is like G.K.Chesterton asking Jesus: “What is there to forgive if they did not know  what they were  doing? (“Father forgive them for they didn’t  know what they were doing.)  Which means, “Sin” is a manufactured product of the Church to keep the faithful on tender hooks,  according to a  Hydepark  Corner, soap box orator. james kottoor, editor)

Lent is a privileged time to prepare our hearts to receive God’s forgiveness, and to show it to others, by forgetting their faults.

According to Vatican Radio, Pope Francis stressed this during his daily morning Mass in Casa Santa Marta, as he discussed God’s infinite capacity to forgive as a perfection of his nature.

Francis also pointed out how greatly this contrasts with the inability of fallen human nature to admit our own frailty.

The Jesuit Pope drew inspiration from today’s reading from the Gospel of Matthew in which the Apostle Peter asks Jesus how many times we are to forgive a brother who has sinned against us, and the Lord responds, seventy-seven times, which represents ‘always.’

Forgiving, the Pope stressed, means opening our hearts so that God’s mercy might come and forgive us, “for, we all have need of pardon, need to ask forgiveness.”

Stressing that we are to trust in God’s mercy and goodness, Francis noted, “When God forgives, his forgiveness is so great that it is as though God forgets.”

The Argentine Pontiff said this is “quite the opposite” of what we do, “as we chatter: ‘But so-and-so did such-and-such.’ He stressed how much history we have of this and noted we do this because we don’t have merciful hearts.

Francis invited those present to have mercy on others, so they shall feel God’s mercy, who, when “He forgives,” He also “forgets.” “In the Our Father,” the Pope recalled, “we pray: ‘Forgive us our debts as we forgive our debtors.’ It is an equation: the two sides go together.

“If you are not able to forgive, how will God forgive you? He wants to forgive you, but He will not if you have closed hearts, where mercy cannot enter.”

‘But, Father, I forgive, but I cannot forget the bad turn that so-and-so did me …’. Well, ask the Lord to help you to forget.”Francis also criticized when we people say ‘I forgive you,’ but mean, ‘You’ll pay me later.’

“This, never!” Francis said. “Forgive as God forgives – to the utmost.” The Holy Father reminded those gathered that heartfelt pardon, given and received, is always an act of Divine mercy.

Pope Francis concluded, saying,“May Lent prepare our hearts to receive God’s forgiveness – but let us receive it and then do the same with others: forgive heartily.