For a peaceful tomorrow learn from: Hiroshima! 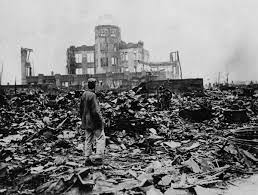 This Piece from Sumit Paul, touches me to the Core! Makes me uncomfortable, urges me to try more! What about you? We can’t change the whole world for better!  Too BIG to hold in our mouth! What about changing ourselves? We surely can, where there is a will there is away! We are doing it daily, at least trying!

We Indians, specially Keralites, call ourselves the educated lot, we are not, we are still what Vivekananda said, home of CRAZY people, Franthalaya of educated illiterates! Look at what is happening today, sex craze, money craze, power craze battle ground of POLITICS & RELIGION, Love jihad, Narcotic jihad  led by Pala bishop, religion & politics drowning in all sorts of absurdities! Oh tempora, Oh mores!

Can’t we ever learn from history: from Asoka the great, Buddha man of peace, Kurukshetra war, Japan’s example after Pearl Harbour destruction? The root cause of violence is VENGEANCE, driving humans to irrational brute bevaviour? It is never, never  a remedy to violence, only soft family feelings of ‘Frattelli Tutti’ wich Sumit Paul, the author of tihis article stresses most!

What was 9/11 years ago? It was the demonstration Vengeans: Sept. 9/11: US had to face the reality that they were so hated by some in the world (How could they not like us?) that they were willing to die to make the point.

Consider therefore, at least try, I am forced to plead to all of you to change ourselves! If am wrong suggest a better course of action. We all must do our  best, God will do the rest! james kottoor, editor CCV

Certain violent episodes in history become metaphors like ‘Pearl Harbour’ and ‘9/11’. During World War II, the destruction of Pearl Harbour by the Japanese air force prompted the USA to use atom bombs against Japan, and on September 11, 2001, the Twin Towers in New York City were completely destroyed in a terror attack. Both incidents changed the course of history and humanity.

The question is: Can violence and retaliatory violence ever be the answer to any issue?

Today, we’re standing at the crossroads of human civilisation, tormented by ceaseless acts of violence, bloodshed and snuffing out of precious lives. Violence can never be a viable solution to any issue. An act of violence begets counter-violence and it goes on. Violence is a natural outcome of vengeance.

For how long can we all afford to carry rancour and revenge in our hearts and minds? Somewhere in life’s journey, we need to drop all ill-feelings for a better tomorrow. Getting rid of vengeance is the way to keep violence in abeyance.

In Japan, 76 years ago, Hiroshima and Nagasaki were literally obliterated by the US air force dropping atom bombs on August 6 and 9. Today, both cities have been rebuilt and the same splendour has been brought back. How did this trans- formation take place? Instead of seething and shouldering in the perennial inferno of revenge, Japan chose to move on. Had it harbored feelings of revenge, the recount would have continued and further collateral damage would have jeopardised world peace. Japan showed sagacity and buried the hatchet, thus, saving humankind from sliding further into the quagmire of blood and gore.

Human beings are inherently good and nothing bitter can survive forever. We all eventually recoil from violence and hatred. Didn’t the sight of the battle of Kalinga transform King Ashok into Ashok, the great? Didn’t the ruthless Angulimal realise his violent ways and repent when he came face-to-face with the Buddha, apostle of peace? Even the Pandavs lamented at the end of the Kurukshetra war that they were indeed victors, but at what cost? It was a Pyrrhic victory for them, as it wiped out all their kith and kin. It was a battle that disenchanted even the victors.

This proves that we all have inherent and intrinsic goodness to become non-violent. So it’s time to become aware that mindless bloodshed and an avenge mentality will lead us nowhere. When Gandhiji was assassinated, his son Devdas requested the government of India to pardon Nathuram Godse and Narayan Apte, because his father never believed in retaliatory action in his entire life. Similarly, Coretta King, widow of the slain US human rights activist Martin Luther King Jr, too, requested the US senate and jury to pardon Earl James Ray, who was finally awarded 99 years of imprisonment sans parole. We need to emulate these greats to make this world a place for all to live in peaceful coexistence.