Follow Jesus’ example to serve, not to be served! 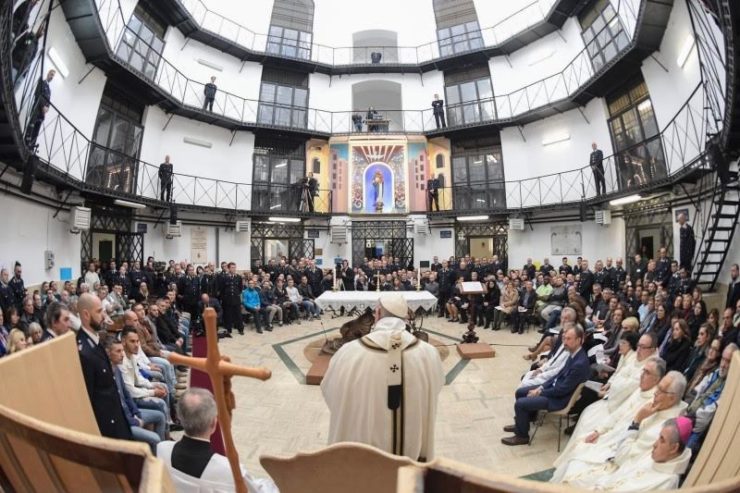 In keeping with his practice each year of his Pontificate, Pope Francis on Holy Thursday, March 29, 2018, washed the feet of prison inmates during the Mass of the Lord’s Supper.

This year, the Holy Father visited Regina Coeli Prison, perhaps the best-known of Rome’s prisons, located very close to the Vatican.  It was built in Rome’s Trastevere neighborhood in 1654 as a Catholic Convent, converted to a prison in 1881.

The prison holds detainees from more than 60 nations, holding up to 900 inmates. It has received attention in the media due to overcrowding and high suicide rates.

The inmates chosen for the ritual of the washing of the feet were 12 men from seven countries: four Italians, two Filipinos, two Moroccans, one Moldovan, one Colombian, one Nigerian and 1 from Sierra Leone. Eight were Catholic; two were Muslims; an Orthodox and a Buddhist.

On his arrival, around 4:00 pm, the Pope met with sick prisoners in the infirmary. Then he presided over the celebration of the Mass in Coena Domini, beginning of the Paschal Triduum, and he left as a gift the altar on which he celebrated.

Finally, before returning to the Vatican, he met with inmates of the 8th Section.

Here is a ZENIT translation of the transcription of the homily that Pope Francis gave off-the-cuff after the proclamation of the Holy Gospel, as well as the words at the end of his visit.

Jesus ends His discourse saying: “I have given you an example, that you also should do as I have done to you (John 13:15) — wash the feet. At that time, slaves washed the feet: it was a slave’s task. People walked on the street, there wasn’t any pavement; there weren’t any cobblestones. At that time there was the dust of the street and people got their feet dirty. And, at the entrance of a home, there were slaves that washed the feet. And Jesus wished to do this service, to give us an example of how we must serve one another.

Once, when they were walking, two of the disciples who wanted to get ahead, asked Jesus if they could occupy important posts, one at his right and the other on the left (Cf. Mark 10:35-45). And Jesus looked at them with love — Jesus always looked with love — and He said: “You do not know what you are asking” (v. 38). The rulers of nations — Jesus says– command, have themselves served and are well (Cf. v. 42). We think of that time of kings, of very cruel emperors, who had themselves served by slaves . . . But among you — says Jesus — it must not be so: he who commands must serve. Your ruler must be your servant (Cf. v. 43). Jesus turns upside down the historical, cultural habit of that time — also that of today –, he who commands, to be a good ruler, wherever he may be, must serve.  I often think — not of this time because everyone is still alive and has the opportunity to change his life and we can’t judge, but we think of history, if many kings, emperors, Heads of State had understood this teaching of Jesus and instead of commanding, of being cruel, of killing people had done this, how many wars would no have happened! Service: there are, truly, people that don’t make this attitude easy, arrogant people, odious people, people that perhaps wish one evil, but we are called to serve them even more. And there are also people that suffer, that are discarded by society, at least for a period, and Jesus goes there to say to them: You are important for me. Jesus comes to serve us, and the sign that Jesus serves us here today, in the Regina Coeli prison, is that He wished to choose 12 of you, as the 12 Apostles, to wash the feet. Jesus takes risks with each one of us. Know this: Jesus is called Jesus; He’s not called Pontius Pilate. Jesus knows nothing about washing his hands: He only knows how to risk. Look at this very beautiful image: Jesus bending down among the thorns, risking getting wounded, to pick up the lost sheep.

Today I, who am a sinner like you, but I represent Jesus, I am Jesus’ ambassador. Today, when I bend down before each one of you, think: “Jesus has risked in this man, a sinner, to come to me and tell me that He loves me.” This is service; this is Jesus: He never abandons us; He never tires of forgiving us. He loves us so much. Look how Jesus risks!

And so, with these sentiments, we go on with this ceremony, which is symbolic. Before giving His Body and His Blood, Jesus takes risks for each one of us, and He risks in service because He loves us so much.

At the gesture of the exchange of peace, the Holy Father pronounced these words:

Here are the Holy Father’s words, in response to the greeting of the Directress of the prison and of an inmate, at the end of the Visit to the Regina Coeli prison.

You have spoken of a new look: of renewing the look . . . This does one good because, at my age, for example, one gets cataracts, and one doesn’t see well the reality: next year we’ll have to undergo an intervention. However it happens so with the soul: life’s work, exhaustion, mistakes, disappointments darken the look, the look of the soul. Therefore, what you said is true: take advantage of opportunities to renew the look. And as I said in St. Peter’s Square [at yesterday’s General Audience] in so many countries, but also in my land, when the bells of the Lord’s Resurrection are heard, mothers, grandmothers take the children to wash their eyes so that they have the look of hope of the Risen Christ. Never tire of renewing your look, of doing that cataract intervention to the soul, daily, but always renew your look. It’s a good effort.

You all know the half-full wine bottle: if I look at the empty half, life is awful, it’s awful, but if a look at the full half, I still have something> to drink.  The look that opens to hope, a word that you said and also you [the Directress] said; and you repeated it several times. One can’t conceive a prison such as this one without hope. Guests are here to learn, or to have the “sowing of hope” grow: there is no just sentence — just sentence! — without it being open to hope; a sentence that isn’t open to hope isn’t Christian, it’s not human!

There are difficulties in life, awful things, sadness — one thinks of one’s own, of one’s mother, father, wife, husband, children . . . that sadness is awful. But don’t let yourselves get down: no, no. I’m here but to be reinserted, renewed. And this is hope; sow hope — always, always. This is your work: to help to sow the hope of reinsertion and this will do everyone good — always. Every sentence must be open to the horizon of hope. Therefore, the death penalty is neither human nor Christian. Every sentence must be open to hope; it must be open to reinsertion, also to share the experience lived for the good of other persons.

Water of resurrection, new look, hope: I wish this for you. I know that your hosts have worked a lot to prepare this visit, even whitewashing the walls. I thank you. It’s for me a sign of benevolence and hospitality and I thank you very much. I’m close to you, I pray for you, and you pray for me and don’t forget: the water that makes the look new, and hope.

Published by:  Dr James Kottoor, Editor-in-Chief, with thanks to Zenith News.