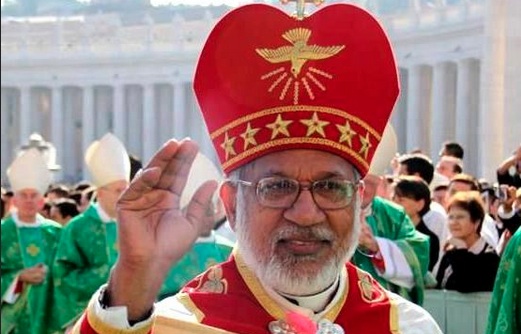 Two personal parishes were established in the dioceses of Lancaster

A speical blessing was given on the historic church and presbytery at St Ignatius, Preston which now serves as the worship, social and catechetical centre for the Syro-Malabar Catholics across the city and area.

The Major Archbishop also inaugurated the foundation in Preston of the Sisters of the Congregation of the Mother of Carmel (CMC) who have only recently arrived from Kerala.

This marks the first foundation of a community of Syro-Malabar Religious Sisters in Great Britain.

Some 1,000 20 clergy from the Syro-Malabar Church and some 20 priests from Lancaster diocese attended the colorful service, which was accompanied by music and drumming.
"The rest of the diocese has a smaller but well-established Syro-Malabar presence – connected canonically to the Blackpool St Kentigern's Deanery – and ongoing provision is being made for their needs," Bishop Michael Campbell explained in his blog.
"Meanwhile, we are becoming increasingly aware at the present time of the reality of migration and the plight of so many men, women and children seeking a better and more peaceful future. A frequent refrain in the Scriptures is that of 'the stranger in your midst', with the injunction to welcome and respect those who differ from us in any way.
"There is no doubt that the presence of the Syro-Malabar communities in the Diocese of Lancaster has brought many blessings to us, and we cannot but be impressed by the fervour of their religious practice and devotion to their faith.
"The concern of the Syro-Malabar Church authorities is to ensure that the faith and practice of their overseas communities be safeguarded and strengthened. In some parts of the world, eg the USA and Australia, the Syro-Malabar actually have their own dioceses and bishops.
"The Syro-Malabar chaplaincy in the Diocese of Lancaster was founded in 2004 by Bishop Patrick O'Donoghue and has, until this point, relied completely on various Roman Catholic parishes in Preston and further afield, to host their liturgies, social gatherings, meetings and prayer services.
"We warmly welcomed the Major Archbishop among us in the conviction that our own Church of Lancaster is strengthened and enriched by the presence of his faithful people among us," he said.