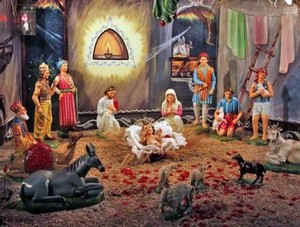 Kolkata: : The first ever crib set (depicting Jesus’ birth) from India, designed by Kolkata-based organization Church Art, would be the latest addition to the International Nativity Museum of Bethlehem’s collection of 223 nativity representations or crib sets from over 93 countries.

The International Nativity Museum in Bethlehem, a UNESCO Heritage Site, is currently located close to the Church of Bethlehem which is considered to be the spot where Jesus was born. Local lore passed down from ancient times holds that the three travellers or Magi who were guided by a star had passed through this path where the International Nativity Museum now stands.

“It is a matter of great honour and prestige that an Indian crib set, which was long due, will now find a place among other crib sets stationed in the International Nativity Museum in Bethlehem. The crib sets in the Museum represent the scene of Jesus’ birth in various artistic forms and as per the culture and traditions of the respective countries. The Indian crib set is representative of pan-Indian culture,” said Father Jesudoss Arokiam, Bursar, International Nativity Museum, Bethlehem.

The International Nativity Museum attracts over 3000 visitors each year from across the globe. In 2013 the highest number of visitors were from India. “Each year many of the visitors from India used to inquire about the presence of an Indian crib set in the Museum and we could only answer in the negative. We have been trying to get an Indian crib set for quite some time and we are thrilled to host one now,” Father Arokiam said.

“The Indian crib set is a simple representation of Jesus’ birth which reflects the pan-Indian culture through traditional Indian dresses like sarees, dhotis and regal attire of the common man to the Chola Kings respectively. The facial features of the models in the crib set have been done on the lines of the models created by the village artisans of India. The Indian crib set also includes models of a cow and camel in the backdrop on an Indian village scene. Not only the International Nativity Museum is getting the first Indian crib set but also the first one in fibreglass. Most of the crib sets from around the world are in clay, wood, stone, ceramics and so on,” said Mr Subrata Ganguly of Kolkata-based company, Church Art, which is into creating various kinds of creative art works for churches, schools and museums.

The International Nativity Museum was first a started in Turin (Italy) as a museum but was shifted to Jesus’ place of birth, Bethlehem, in 1999. It was inaugurated by Pope John Paul II during the Millennium Celebrations with Yasser Arafat.