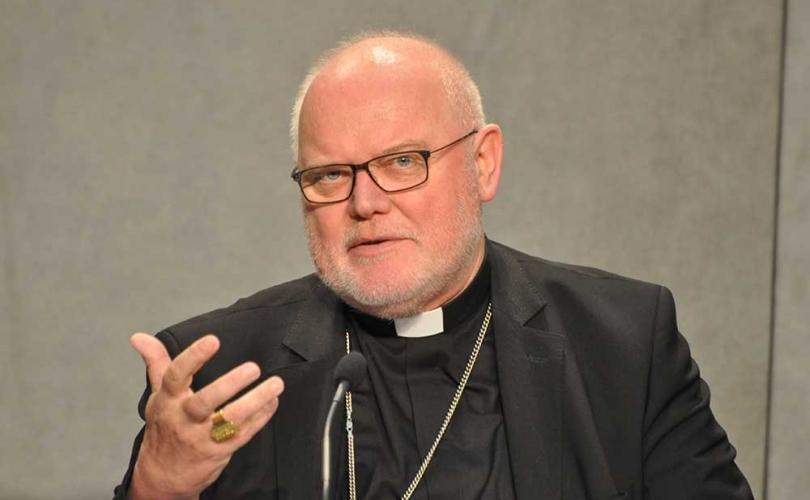 Note: For those who believe in the Biblical creation story – a figment of human imagination, still disputed – God didn’t prescribe these 4 prohibitions below. On the contrary he asked the first couple to increase and multiply! So to whom do you give credit: to God or human imagination? To his self-assumed vicars on eart?

For the moment both the factions can appeal or claim to be on the side of Francis the liberal Pope who had given his tacit or verbal support to specific items like ‘homosexuality’ and questioning “Why produce like rabbits?’ But he has to act like an umpire in a fierce football shoot out!

The ‘Titanic’ called the Church is being hit by Hmmalayan icebergs. Its captain called the Pope can’t be slumbering on the deck like Jesus! Cab he? james kottoor, editor ccv.

Please read below report on

In 2019, four panels of experts were preparing working documents to serve as the basis for discussion among the participants of the Synodal Path, a process that begins on Janunary 30. A careful study of those four documents reveals that the Church in Germany would, in fact, be reinvented, in spite of claims to the contrary made by Cardinal Reinhard Marx.

The head of the German Bishops’ Conference had stated in an interview that the Synodal Path does not want to “reinvent the Church.” With the first assembly being scheduled for the end of January and the beginning of February, the two-year long “Synodal Path” is focusing on sexual morality, the lifestyle of priests, women in the Church, and the abuse of power. The working documents essentially follow the agenda of Professor Eberhard Schockenhoff to loosen the Church's moral teaching, which he outlined for the German bishops at their conference last March.

The working document’s chapter dealing with sexual morality is revealingly titled, “On the further development of Catholic teaching on sexuality.” The document demands sexual morality must develop “on the basis of insights of the human sciences, including the life experience […] of (faithful) loving people.”

The Catechism of the Catholic Church, on the other hand, refers to the encyclical Humanae Vitae by Pope Paul VI, teaching “that ‘each and every marriage act must remain open ‘per se’ to the transmission of life.’” The Catechism adds, “This particular doctrine, expounded on numerous occasions by the Magisterium, is based on the inseparable connection, established by God, which man on his own initiative may not break, between the unitive significance and the procreative significance which are both inherent to the marriage act.”

Pope John Paul II wrote in Familiaris Consortio, “When couples, by means of recourse to contraception, separate these two meanings that God the Creator has inscribed in the being of man and woman and in the dynamism of their sexual communion, they act as ‘arbiters’ of the divine plan and they ‘manipulate’ and degrade human sexuality – and with it themselves and their married partner – by altering its value of ‘total’ self-giving.”

Again, the Catechism teaches on this, quoting from a document of the Congregation for the Doctrine of the Faith, “‘Both the Magisterium of the Church, in the course of a constant tradition, and the moral sense of the faithful have been in no doubt and have firmly maintained that masturbation is an intrinsically and gravely disordered action.’ ‘The deliberate use of the sexual faculty, for whatever reason, outside of marriage is essentially contrary to its purpose.’ For here sexual pleasure is sought outside of ‘the sexual relationship which is demanded by the moral order and in which the total meaning of mutual self-giving and human procreation in the context of true love is achieved.’”

Finally, according to the working document, “homosexual acts also realize positive meaningful values, insofar as they are an expression of friendship, reliability, loyalty and support in life.” Homosexuality, it adds, should no longer be considered as intrinsically evil. A blessing of homosexual unions is not excluded by the working document.

These statements also contradict the teaching of the Church as expressed in the Catechism. There, it says, “Basing itself on Sacred Scripture, which presents homosexual acts as acts of grave depravity, tradition has always declared that ‘homosexual acts are intrinsically disordered.’ They are contrary to the natural law. They close the sexual act to the gift of life. They do not proceed from a genuine affective and sexual complementarity. Under no circumstances can they be approved.”

Signaling where the church in Germany is headed,Cardinal Marx, who is the head of the German Bishops' Conference, stated in an interview earlier this month that homosexuals belong to the Church’s “sacramental community” and has defended “blessing” homosexual couples.

While the other working documents are more careful in putting forward controversial positions, none of today’s hot button issues are taken off the table. The document on the role of women in the Church says that not only should women participate more in the life of the Church, but the “question of the sacramental ordination of women needs to be asked.”

In this context, the documents poses the question, “Is there even the possibility of achieving certainty about the will of God on this subject with human power of cognition?” Then, the document asks about the degree of authority of the magisterial documents on this question. Considerable time is spent within the document on the question of female deacons, advocating for a “revival of the tradition of the ordination of deaconesses.”

Regarding women priests, Pope John Paul II had declared already in 1994, “Although the teaching that priestly ordination is to be reserved to men alone has been preserved by the constant and universal Tradition of the Church and firmly taught by the Magisterium in its more recent documents, at the present time in some places it is nonetheless considered still open to debate, or the Church’s judgment that women are not to be admitted to ordination is considered to have a merely disciplinary force.”

He added, “Wherefore, in order that all doubt may be removed regarding a matter of great importance, a matter which pertains to the Church’s divine constitution itself, in virtue of my ministry of confirming the brethren I declare that the Church has no authority whatsoever to confer priestly ordination on women and that this judgment is to be definitively held by all the Church’s faithful.”

The panel of experts focusing on the lifestyle of priests mentioned the question of female priests, too, but referred it to the panel studying the role of women in the Church. However, when it comes to priests being unmarried, the document asks, while not giving any answers, “Is celibacy the only lifestyle suitable to the nature of the priesthood?”

Only recently, Cardinal Gerhard Müller, former prefect of the Congregation for the Doctrine of the Faith, had admitted that celibacy is not absolutely required by the nature of the priesthood,” but went on to say that “it arises in the most intimate appropriateness from the nature of this sacrament as a representation of Christ as the bridegroom of his bride, the church and the head of his body, the Church, in the power of his mission and his form of life of the total gift of self to God.”

“Fundamentally, the church has to work towards a celibate priesthood,” he said. Müller also emphasized that even in the early Church, celibacy was the norm, adding, “In the Eastern Church – departing from the tradition of the early Church, and by no means in its continuation – it was allowed to priests and deacons by the Quinisext Council (691/692), which was characteristically held in the imperial palace and not in a church, to continue married life.”

The first assembly of the Synodal Path will take place in Frankfurt, in the heart of Germany, from January 30 to February 1. Roughly 230 people are members of the assembly, including all bishops in Germany, but also representing the Central Committee of German Catholics and other organizations.

Earlier this month, an international coalition of lay Catholics called Acies ordinata mobilized in Munich to silently pray in “firm protest against the German Episcopal Conference and its President” Cardinal Marx on account of the prelates’ plan to embark on the controversial “synodal path.”