Fallout of NRC and CAA – Will India become a Hindu Rashtra?

This refers to 19 December 2019 mattersindia.com report captioned DAYAL, CEDRIC AMONG HUNDREDS DETAINED FOR PROTESTING CAA. The report can be accessed at  http://mattersindia.com/2019/12/dayal-cedric-among-hundreds-detained-for-protesting-caa/

The report said that Dr John Dayal and Fr Cedric Prakash were arrested along with others, in Delhi and Ahmedabad respectively, while doing peaceful demonstration, against the Citizens’ Amendment Act (CAA).   The Act was passed recently in the Parliament and has been challenged in the Supreme Court. They including historian and author Ramachandra Guha, who was detained Bangalore, among many others, had every democratic right to hold peaceful demonstration on matters which according to their conviction gravely impact citizens of our country.

In the last paragraph of the report it was written that CAA excludes Muslims. Thus it was contended that the Act discriminates based on religion and violates the basic tenets of the Indian Constitution. The protestors also see CAA as first step towards converting India into a Hindu theocratic nation. 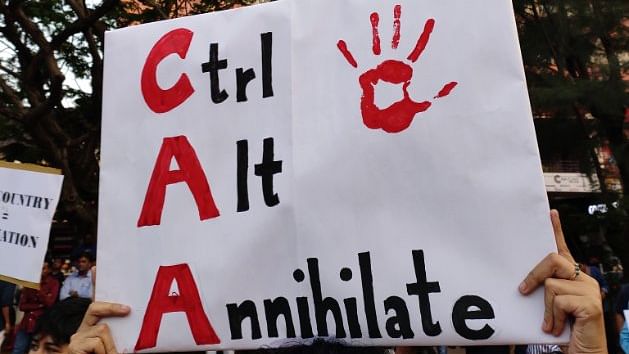 Does the Indian Church have any role to play in this critical time when the nation is torn apart with fear and confusion?  The answer is certainly yes. Each Diocese should conduct open house sessions by bringing in some legal experts to explain to the faithful the nitty-gritty of CAA and NRC (National Register of Citizens). Similar sessions should also be held on the Constitution of India to make us aware of our rights and duties. The training / workshop should be conducted in modular form so that it is easy for the Aam Aadmi (laity whom the Church calls `sheep'!) to comprehend complex issues regarding one's rights and duties. I feel most of us are agitating without reading the Act vis-a-vis the Indian Constitution, and are mainly going by the herd mentality or for photo ops. Therefore an interactive session with the faithful is a must. These sessions should be conducted by practising lawyers and not by the so-called leaders for all seasons picked up by the Church hierarchy more for their obeisance than for their expertise.

Regarding the apprehension that through CAA and some other bills, India will be converted into a Hindu theocratic nation, it is not founded on logic in view of the Supreme Court of India pronouncements, particularly in Keshavananda Bharti v. State of Kerala (1973) case. Here the Supreme Court clearly stated that the Parliament cannot change certain basic tenets of the Indian Constitution, even by absolute majority. SECULARISM is one such basic tenet. Going by this logic, even if the current NDA government by overwhelming majority in the Parliament were to declare India a Hindu Rashtra, it will be struck down by the Supreme Court of India. Let us delve in further (source: Wikipedia).

(1) Supremacy of the Constitution  (2) Rule of law (3) The principle of Separation of Powers (4) The objectives specified in the Preamble to the Constitution (5) Judicial Review (6) Articles 32 and 226  (7) Federalism including financial liberty of states under Articles 282 and 293  (8) Secularism (9) The Sovereign, Democratic, Republican structure (10) Freedom and dignity of the individual (11) Unity and integrity of the Nation  (11) The principle of equality, not every feature of equality, but the quintessence of equal justice (12) The "essence" of other Fundamental Rights in Part III  (13) The concept of social and economic justice — to build a Welfare State: Part IV in toto  (14) The balance between Fundamental Rights and Directive Principles (15) The Parliamentary system of government (16) The principle of free and fair elections (17) Limitations upon the amending power conferred by Article 368  (18) Independence of the Judiciary (19) Effective access to justice  (20) Powers of the Supreme Court under Articles 32, 136, 141, 142  (21) Legislation seeking to nullify the awards made in exercise of the judicial power of the State by Arbitration Tribunals constituted under an Act[8]  (22) Welfare state.

In case of CAA, the opposition's argument is that it puts a barrier on Muslim identity by declaring India a welcome refuge to all other religious communities. It seeks to legally establish Muslims as second-class citizens of India by providing preferential treatment to other groups. This violates the Indian Constitution’s Article 14, the fundamental right to equality to all persons. The basic structure of the Constitution cannot be reshaped by any parliament. And yet the Government maintains that it does not discriminate or violate the right to equality. So let the Supreme Court decide.

In this context, it would be interesting to refer to Aakar Patel’s article 1st October 2018 “WHY BJP CAN’T TURN INDIA INTO HINDU RASHTRA” in Rediff.com.  Aakar who is winner of the 2018 Prem Bhatia Award for Political Reporting and Executive Director, Amnesty International India, wrote:

The author has often been to Pakistan and has studied it for many years. He said that life is not very different for the individual in a 'religious' State over an individual in a 'secular' State on the Subcontinent.

Notwithstanding the interesting and in-depth analysis of what Aakar Patel has written, what will put a spanner on the powers-that-be to declare India a Hindu Rashtra is the Supreme Court stricture on `Basic Tenets' given above.  The Indian electorate is not naive and cannot be taken for a royal ride all the time.