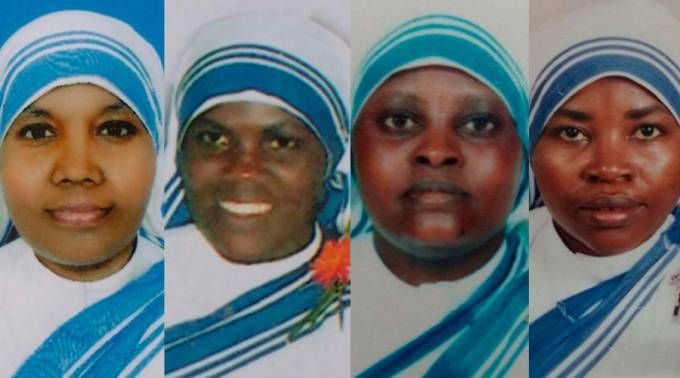 By Maggie Maslak and Alan Holdren.

These sisters left their homes in India and Africa to serve the poor, elderly, and disabled in the war-torn country of Yemen. They worked together with volunteers at the convent's home care center, where they served around sixty to eighty patients of all religions.

“They were serving all poor people irrespective of their religion. Their duty was to help the poor,” a representative from the Apostolic Vicariate of Southern Arabia told CNA.

But on March 4, the convent was attacked by two gunmen who killed Sr. Anslem, Sr. Judith, Sr. Marguerite, and Sr. Reginette, along with sixteen other victims, including volunteers from Ethiopia and Yemen. Each victim was found handcuffed and shot in the head.

No residents of the nursing home were harmed.

Pope Francis called the sisters “martyrs of today” who “gave their blood for the Church.”

Since the attack, the Missionaries of Charity's nursing home has been relying on the aid of volunteers and government support to continue their care of the elderly, which has lasted for 24 years in Aden.

“Now, the local government is taking care of the elderly with the help of some volunteers, university students and young people,” the representative said.

The convent's superior, Sister Sally, was originally reported missing during the attack, but she has since been declared safe.

“Sister Sally is safe and I think she will go to her regional superior's house that is in Jordan,” the representative added.

However, Salesian priest Father Tom Uzhunnalil is still missing after his reported abduction. Fr. Uzhunnalil is an Indian priest who had been staying with the sisters and has not been found since the attack on March 4.

No group has claimed responsibility for the onslaught against the Missionaries of Charity convent, but the country of Yemen is in the midst of a year-long civil war which has claimed the lives of more than 6,000 people.