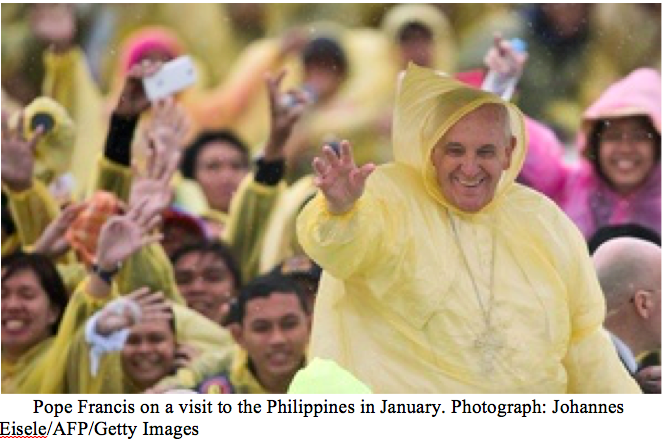 The most anticipated papal letter for decades will be published in five languages on Thursday. It will call for an end to the ‘tyrannical’ exploitation of nature by mankind. Could it lead to a step-change in the battle against global warming?

(Note: Virginia Sldanha has forwarded this article to us. The most anticipated papal letter for decades will be published in five languages on Thursday. It will call for an end to the ‘tyrannical’ exploitation of nature by mankind. Could it lead to a step-change in the battle against global warming? Without a revolution in hearts and minds the world will be in ruins, warns the Pope. Yet the Pope is described   a “total disaster” by  US Catholic economist Stephen Moore. But others say: the encyclical will be well received in developing countries. james kottoor)

Pope Francis will call for an ethical and economic revolution to prevent catastrophic climate change and growing inequality in a letter to the world’s 1.2 billion Catholics on Thursday.

In an unprecedented encyclical on the subject of the environment, the pontiff is expected to argue that humanity’s exploitation of the planet’s resources has crossed the Earth’s natural boundaries, and that the world faces ruin without a revolution in hearts and minds. The much-anticipated message, which will be sent to the world’s 5,000 Catholic bishops, will be published online in five languages on Thursday and is expected to be the most radical statement yet from the outspoken pontiff.

However, it is certain to anger sections of Republican opinion in America by endorsing the warnings of climate scientists and admonishing rich elites, say cardinals and scientists who have advised the Vatican.The Ghanaian cardinal, Peter Turkson, president of the Vatican’s Pontifical Council for Justice and Peace and a close ally of the pope, will launch the encyclical. He has said it will address the root causes of poverty and the threats facing nature, or “creation”.In a recent speech widely regarded as a curtain-raiser to the encyclical, Turkson said: “Much of the world remains in poverty, despite abundant resources, while a privileged global elite controls the bulk of the world’s wealth and consumes the bulk of its resources.”

The Argentinian pontiff is expected to repeat calls for a change in attitudes to poverty and nature. “An economic system centred on the god of money needs to plunder nature to sustain the frenetic rhythm of consumption that is inherent to it,” he told a meeting of social movements last year. “I think a question that we are not asking ourselves is: isn’t humanity committing suicide with this indiscriminate and tyrannical use of nature? Safeguard creation because, if we destroy it, it will destroy us. Never forget this.”

The encyclical will go much further than strictly environmental concerns, say Vatican insiders. “Pope Francis has repeatedly stated that the environment is not only an economic or political issue, but is an anthropological and ethical matter,” said another of the pope’s advisers, Archbishop Pedro Barreto Jimeno of Peru.

“It will address the issue of inequality in the distribution of resources and topics such as the wasting of food and the irresponsible exploitation of nature and the consequences for people’s life and health,” Barreto Jimeno told the Catholic News Service.

He was echoed by Cardinal Oscar Rodríguez Maradiaga of Honduras, who coordinates the Vatican’s inner council of cardinals and is thought to reflect the pope’s political thinking . “The ideology surrounding environmental issues is too tied to a capitalism that doesn’t want to stop ruining the environment because they don’t want to give up their profits,” Rodríguez Maradiaga said.

The rare encyclical, called “Laudato Sii”, or “Praised Be”, has been timed to have maximum public impact ahead of the pope’s meeting with Barack Obama and his address to the US Congress and the UN general assembly in September.It is also intended to improve the prospect of a strong new UN global agreement to cut climate emissions. By adding a moral dimension to the well-rehearsed scientific arguments, Francis hopes to raise the ambition of countries above their own self-interest to secure a strong deal in a crucial climate summit in Paris in November.

“Pope Francis is personally committed to this [climate] issue like no other pope before him. The encyclical will have a major impact. It will speak to the moral imperative of addressing climate change in a timely fashion in order to protect the most vulnerable,” said Christiana Figueres, the UN’s climate chief, in Bonn this week for negotiations.Francis, the first Latin American pope, is increasingly seen as the voice of the global south and a catalyst for change in global bodies. In September, he will seek to add impetus and moral authority to UN negotiations in New York to adopt new development goals and lay out a 15-year global plan to tackle hunger, extreme poverty and health. He will address the UN general assembly on 23 September as countries finalise their commitments.

However, Francis’s radicalism is attracting resistance from Vatican conservatives and in rightwing church circles, particularly in the US – where Catholic climate sceptics also include John Boehner, Republican leader of the House of Representatives, and Rick Santorum, a Republican presidential candidate.Earlier this year Stephen Moore, a Catholic economist, called the pope a “complete disaster”, saying he was part of “a radical green movement that is at its core anti-Christian, anti-people and anti-progress”.

Moore was backed this month by scientists and engineers from the powerful evangelical Cornwall Alliance for the Stewardship of Creation, who have written an open letter to Francis. “Today many prominent voices call humanity a scourge on our planet, saying that man is the problem, not the solution. Such attitudes too often contaminate their assessment of man’s effects on nature,” it says.

But the encyclical will be well received in developing countries, where most Catholics live. “Francis has always put the poor at the centre of everything he has said. The developing countries will hear their voice in the encyclical,” said Neil Thorns, director of advocacy at the Catholic development agency, Cafod. “I expect it to challenge the way we think. The message that we cannot just treat the Earth as a tool for exploitation will be a message that many will not want to hear.” The pope is “aiming at a change of heart. What will save us is not technology or science. What will save us is the ethical transformation of our society,” said Carmelite Father Eduardo Agosta Scarel, a climate scientist who teaches at the Pontifical Catholic University of Argentina in Buenos Aires.