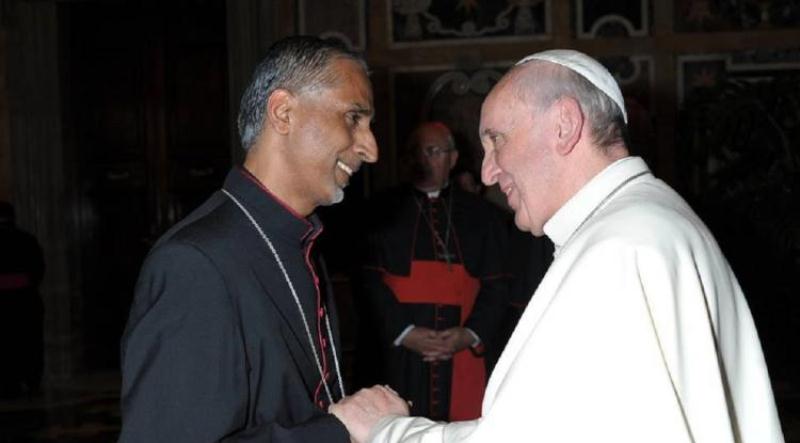 Matters India. N.Delhi, May 3rd,2020. In the pic: Bishop Murickan with Pope Francis!

Here is a clear example of how Francis Pappa’s preaching with his actions becomes irresistibly contageious! Auxiliary Bishop Jacob Muricken of Palai became the first living example in the world for donating one of his kidneys to a poor Hindu worker in 2015. He said he got the inspiration  from Pope Francis’ call to perform acts of mercy during the YEAR OF MERCY!

Imagine, it is the first living example in the world of a Bishop doing such an act of mercfy! He has not stopped with that. His latest example is, he is giving up his bishopric so that he could lead a strict ascetic life, reports a news portal that claims to have spoken to the prelate!

Following his example so far, 15 priests and six nuns  have donated kidneys to non-related recipients through the organ donation network Kidney Federation of India, which is  headed by Fr Davis Chiramel from 2008.

Sister Chaithanya, a member of Congregation of Mother of Carmel, was the first to follow the example of Bp.Muricken just three days after the bishop donated his. In that sense it is the story of the famous saying: “Smile a while and while you smile, miles and miles of smiles blossom.” That is how exemplary actions become contagious.

Sr Chaithanya thus became the second CMC nun to donate her kidney. These are the ones who follow Jesus to heal  his wounds to spread his example of the Good Samariton. “I believe paradise is realized when you offer whatever is in your possession while alive, and not when you ensure your body is laid in a nicely built tomb,” she said.

Some ten years ago this writer published a two part series on body and organ donation in Indian currents, Delhi. It was translated into Malayalam and published in Kerala and American magazines. Following that I donated my body to the Amrutha Institute of Medical Sciences, hospital in Ernakulam and am still waiting for it to be realized even after ten years! I too happen to belong to Palai diocese originally.

Bishop Murickan’s decision to give up Bishopric is one on an equal footing of the resignation of Benedict XIX from Papacy and a literal practicing of Jesus’ command, “You all have to be brothers only, not Rabbi, Priests, Teachers, Fathers”(Mt.23.8-12). We hope this will put to shame bishops and cardinals who still want to stick on to their worldly titles and honorific appellations and dream of perpetuating their memory by getting monuments built like TAJ MAHAL, even in this world after death.

Truth is a Trap!

May ‘COVID 19’ hasten that day to pull the curtain to all such worldly dreams of clerics and bishops! Otherwise also, it is said: ‘Eloquent words or speech, with wit and wisdom move listeners to go crazy to do even irrational things because a crowd has many heads, not one mind, but examples of high moral and spiritual quality simply drag people to act like a whirlpool that drags along because “Truth is a Trap!”

To get too near to truth is to be trapped in, to be sauced in! May that happen to every Church men who are carried away by worldly power, glory and honorific titles and appellations.the magnificent example set by Palai Bishop Murickan! james kottoor, editor ccv.

Please read below the article from Matters India!

Palai, May 2, 2020: Auxiliary Bishop Jacob Muricken of Palai has written to the Vatican seeking permission to leave bishopric so that he could lead a strict ascetic life, reports a news portal that claims to have spoken to the prelate.

This is the first time in the Indian Church history that a serving bishop relinquishes his post to pursue a deeper spiritual life like the early hermits of ancient Egypt, reports thenewsminute.com.

“He has applied for permission to leave the bishop’s post. Not sure if it is approved,” a priest of the diocese told Matters India on May 2 on condition of anonymity. According to the priest, Bishop Muricken already leads an ascetic life.

Bishop Muricken, who had in 2016 created history as the first prelate to donate one of his kidneys, now wants to live alone with limited food and minimum worldly comforts. The 56-year-old prelate reportedly told the website that he has written to Rome and informed Cardinal George Alencherry, head of the Syro-Malabar Church.

Bishop Muricken had actually given a letter to Cardinal Alencherry in 2018. The Cardinal will send it to Rome after getting the approval of the Syro Malabar Bishops’ Synod. Bishop Muricken said he has been nursing the dream to become an ascetic since 2017. He plans to leave the bishop’s post by 2023.

“The decision was communicated to the Pala Bishop Joseph Kallarangattu earlier in 2017. Initially, the bishop had not given approval for my demand. However, I persisted in my demand and he asked me to continue in the bishop’s position and lead a monastery life. Since that is impractical I have decided to follow my mind,” Bishop Muricken was quoted as saying. He ruled out any tensions or pressures or schism inside the diocese which compelled him to the decision.

He said that although he was not interested to lead a secluded life it was on “inspiration from God” that conditioned his mind. He has identified Nallathanny in Idukki district as the place for his ascetic life. He has discussed with the church authorities and built a hut there. Right now three laymen live a secluded hermit life inside the forest at Nallathanny.

Bishop Muricken, who hails from a Catholic family in Pala diocese, was born at Muttuchira on June 16, 1963.After completing master’s degree in Economics, he Joined Good Shepherd Minor Seminary, Palai. He completed his priestly studies at St. Thomas Apostolic Seminary, Kottayam.

He was ordained a priest on December 27, 1993. After a short period of service as assistant vicar at St. Mary’s Forane Church Kuravilangad, he was appointed rector of Savio Home Boarding House, Neeloor. Later he served the diocese in various capacities as professor at the diocesan minor seminary, secretary of Corporate Educational Agency, vicar at Chakkampuzha and Neeloor parishes.

He was appointed the auxiliary bishop of Palai on August 24, 2012, while serving as the diocesan pastoral coordinator. His episcopal ordination was on October 1, 2012 at St. Thomas Cathedral, Palai. He was the general convener for the 31st Plenary Assembly of Catholic Bishop’s Conference of India held at Palai February 5-12, 2014.