Europe’s fractious Catholics set out their Views in Synod Questionnaire 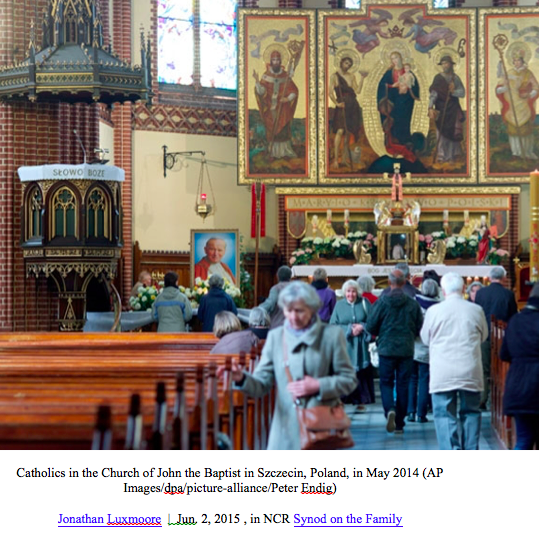 [Jonathan Luxmoore is a freelance writer covering European church news from Warsaw, Poland, and Oxford, England.] This story appeared in the June 5-18, 2015 print issue under the headline given above)

(Note: This article gives a researched data on European Bishops’ thinking on Coming  concluding October Synod on FAMILY.  It helps to compare where stand Churches in India (Latin-Syromalabar-Malankara). Are they doing any dialogue to listen to ordinary  lay people to collect   lived experience-data  and  send them to  Synod organizers? To date nothing is known to have done in India. At least the Church in India has  said nothing in public. But countries like Switzerland, France, Belgium, Germany have already sent in their survey reports since the dead line to send reports was last April 15.. Already last November we had written in Indian Currents (Nov.2/15): “Synod Shifts to Parish, Diocesan Levels, Is the Church in India ready to follow the example of Pope Francis in its year-long reflection and learn through dialogue?” and in various websites. Even the Church Citizens Voice  had  offered  itself to be  the  forum for national or regional dialogue and debate and  sent all these  to all Indian Bishops, But no Bishop has  responded to date. Transparency and dialogue with lay organizations have never been  traits of any Church here. So the question is whether the examples of various Bishops’  conferences abroad will prompt Indian  Bishops to wake up in  the final 3 months left  to do something to become an active participant in the coming concluding October Synod. Dr James Kotoor)

Like their counterparts around the world, Europe's bishops' conferences are supposed to have been engaged in a listening process for next October's Synod of Bishops on the family.

And while little has been divulged officially so far about the views collected from Catholic respondents, it's been possible to glean some measure of the strong feelings being expressed.

When the Vatican sent out the final report of the synod's October 2014 Extraordinary Assembly, it asked bishops to conduct an "in-depth examination" and seek out "practical solutions" to the "innumerable challenges" identified at the synod sessions.

It circulated 46 questions, as part of the lineamenta, or preparatory documents, about family ministry and how the church could best tackle issues such as homosexuality, divorce and remarriage, contraception, and cohabitation.While Spain's bishops kept the questionnaire strictly within the church, those of England and Wales released it on the Internet and invited everyone to respond. Other church leaders handled the document variously in time for Rome's April 15 deadline.

The bishops' conference of Switzerland received completed questionnaires from 6,000 Catholics and published a digest in early May.Arguments from theology and natural law, many Swiss complained, were "complicated, incomprehensible and idealistic," while the church offended human dignity by preaching the inviolability of marriage and caused hurt by calling gays and lesbians to a life of chastity.

"They wish the church and synod to take reality into account, and to stop defining it as inadequate, irregular, defective and wounded," the Swiss bishops' spokesman, Walter Müller, told journalists when the results were published. "Only a small minority of answers expressed the wish for a narrow observance of the church's current doctrine with its strict discipline."

Swiss Catholics had taken part in parish debates, the bishops disclosed. The results, urging Rome to stop excluding the divorced and remarried from Communion and to find a better place for homosexuals in the church, were compiled into 570 separate reports.

In neighboring France, where each bishop decided how best to promote debate in his diocese, the church received 10,000 questionnaire responses. French Catholics were pleased to be asked their opinion and hoped it would "become a regular practice," according to Archbishop Pierre-Marie Carré of Montpellier, vice president of the bishops' conference.Special debates on family pastoral issues were staged at the shrine of Lisieux, as well as at the Marian center of Lourdes during the bishops' March plenary, before the questionnaire results were forwarded to Rome. Pope Francis and the Council of the Synod of Bishops reviewed input from the world's bishops May 25-26.

In Belgium, where the questionnaire was published last February in the Catholic weekly Journal Dimanche, initial results suggested church teachings on sexuality and marriage were, in the words of a statement, "hardly understood, even among churchgoing Catholics, and also not practiced." "This method of questioning bishops' conferences reflects the ambition of Pope Francis to run consultations that aren't just formal but also 'real,' " the Belgian bishops explained in a website statement.

The Vatican has advised bishops' conferences "to involve academic institutions, lay organizations and gatherings, and other ecclesial bodies with the aim of promoting a thorough discussion."Predictably, the most comprehensive material has come so far from Germany, whose bishops have taken the lead in pressing for liberal church reforms.

In a 17-page March report, the German bishops' conference said it had received only 1,000 responses from the country's 27 dioceses and assorted Catholic associations and religious orders.However, the questionnaire suggested that most German Catholics hoped for a greater openness to same-sex unions and cohabitation, as well as to the divorced and remarried. Most agreed with the church's teachings on faithfulness in marriage and the evils of abortion. But many also wanted to overcome the divide "between the reality practiced in families and church teachings," and an "appreciative language for forms of relationship which do not conform to the church's ideal."

In its pastoral care, the report noted, the church should ensure "open, unprejudiced and non-moralizing communication" with "those who regard themselves as Christians and Catholics, but do not or cannot live in full congruency with church teachings." On issues such as homosexuality, there was a need for "further development" in the church's teaching on sexual morality.

"Exclusion from the sacraments, above all when it is permanent," as with those who have been divorced and remarried, "contradicts the conviction of faith held by the vast majority of Catholics that God forgives all sin, opens up the chance for conversion and makes it possible to have a new beginning in life," the German bishops' report concluded. "There can be no doubt this remains a pivotal issue for the credibility of the Church."

Such notions are being fiercely resisted across the border in Poland, where the church's Catholic Information Agency, KAI, has questioned the method and validity of the German bishops' findings, and has provided little if any information about the questionnaire in Poland itself. In a March survey by Warsaw's Public Opinion Research Center, up to three-quarters of Polish Catholics disagreed with their church's stance on homosexuality, contraception and extramarital relationships, and favored a change in Catholic teaching on issues from divorce to clerical celibacy.

The survey suggested Catholic attitudes had shifted markedly since the April 2005 death of the Polish pope, St. John Paul II, with 80 percent now favoring Communion for the divorced and remarried, and almost as many believing the church should accept practices such as in vitro fertilization. "While most of those surveyed considered Pope Francis a moral authority, ever more people now see nothing wrong in behavior that contradicts church teaching," the research center's commentary noted. "There is a growing dissonance between the stance of believers and church teaching."

Polish church leaders accused the center of reducing key teachings to a "popularity contest" and hotly rejected the survey's findings.

The Vatican's synod questionnaire indicated just the opposite, insisted Archbishop Stanislaw Gadecki, the bishops' conference president. Results showed that families who participate in the church's sacramental life, pray regularly and join Catholic movements are always happier, he said.Yet the results of Vatican questionnaire have not been released, and the bishops' conference spokesman, Msgr. Jozef Kloch, says he has no knowledge as to how widely it was even distributed.

"This questionnaire doesn't amount to serious research — nor can the views expressed by taken to represent any group position or set of conclusions," Koch told NCR. "The results should be treated as positive, rather than negative, since they aren't aimed against anyone or any particular teaching or practice." However contested, the questionnaire findings are to be submitted to the synod secretariat for including in the instrumentum laboris, or program of work, for the upcoming session.

The pope, meanwhile, has named European experts from Belgium, France, Italy, Spain and elsewhere as synod consultants, and Europeans are prominently represented in Rome study groups looking at the most sensitive family-related issues. Europe's fractious and divided church looks set to play a key role when the synod convenes in October.