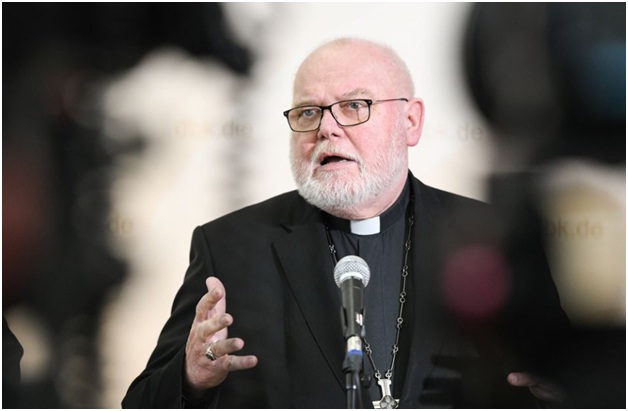 To understand the importance of the German Bishops’ conference, past, present and forth coming, we have to leap back very far into history into the times of Vatican II  (1962–1965) Rome, Mandellin  Conference of Latin America 1968 with its “Liberation Theology and option for the poor”, and the Church in India Seminar, Bangalore; broadcast through New Leader with its motto “the whole truth in all charity” as the ‘Voice of the Voiceless’ and today  we CCV, as a faint and fading echo of the  “Cattle  class” reminding one of the ‘Base communities of  Conference of Latin American Bishops (CELAM). Possible to exlain any of this here? Impossible!

Base communities or Cattle class!

So just see what is cited above as so many  huge lamp posts and ours, the Cattle Class as the last in the line of lamp posts reflecting the “Base communities”, of the Latin American option for the poor and marginalized. The idea is the same but we have not taken inspiration from CELAM but from Sashi Tharoor’s  “Cattle Class” or ordinary travellers in plain or in general compartment in train.

It stands in diametric contrast with Ordinaries with capital ‘O’,  the hierarchical setup with all Capitals, equivalent to Constantenian set up, where it is impossible to see any radical reform happening in our or in our children’s lifetime. But the Cattle Class, anywhere will remain and wax like the moon as long as it is focused on and around JESUS the Sun.

Serious open discussions like that of Germany, under Cardinal Marx, president of the Bishops’ Conference there, for evolving new thinking and practice among Catholics on sex, marriage, divorce, cohabitation, celibacy, women’s ordination, Christian living of sacraments without ever entering a church, but totally involved in executing the “Nazareth Manifesto” of Good news to the poor, food to the hungry, release to captives, sight to the blind, freedom to the oppressed (Lk.4.16), are taking place in many countries.

By many countries, we mean countries in Europe, America, Africa and Latin America but not in India, since most bishops in India are degree holders in Canon Law which Cardinal Gracias saw as an impediment to explain and implement ‘Birth Control’ Enclyclical of Paul the VI, at the Church in India Seminar, Bangalore, while Cardinal Suenens of Belgium always said, a Bishop should be first and formost a theologian to implement them.

Pope Francis has been dropping hints on what the Bishops’ conferences should be discussing when he said at random, that half of Catholic marriages are not valid, implying the question of divorce and remarriage don’t arise in most of the cases; hence the possibility to give communion to most of the remarried. He often asked: what use is the church if the so-called Christians in Europe and West visit the church only after having one or two children? Hence his call to the Church to become the Red Cross in a Field Hospital to save the dying and not to check blood pressure and heartache comfortably in the Confessional. You know what is happening in confessional.

We can’t expect such things to happen in the Indian church communicating and discussing through deafening silence of  “see-not, hear-not and speak-not. In spite of that some of the theologically bent sisters, much maligned these days,  14 of them  sent and missile like letter to Pope John Paul 2nd asking to reconsider his ban  on discussing  “Women’s ordination” and all of them got thrown off their horses back like Saul on the  road to Damascus.

So in the Church in India, reform movements have to be and will be spearheaded by laity, women and men, a Church  from bottom to top, fired up by the deafening cry of Jesus: “Misereor Super Turbam!”  I have pity on the multitude! Also think of a single woman ‘Mary Magdaline’  getting the whole sleeping hierarchy moving: “Wake up, go to the tomb, He is risen!” Sisters of the world, within and outside convents, lead as front battalion carrying the flag of the good word, good news! Only you can conceive and deliver the word made flesh, not men, whether others call you women priests or not!

Bishops around the world?

The German bishops’ ongoing discussion is only an example of similar ones happening in other countries in Europe, Americas and Africa. We may wish that a similar one happen also in India, but none to our knowledge. If so, it is because in India  our bishops have now become famous or notorious  for speaking to people through deafening SILENCE! Compare carefully how Cardinal Marx speaks to laity in the report below.

How far one can go with a policy of “see not,  hear not and speak not”,and not as an extention of the hands and feet and lips of Jesus, no one knows. But as long as it does, it will be continuing as the Church of Constantine, and no radical reform will ever happen in the Indian Church. james kottoor, editor CCV.

Please read below report in

The Catholic Church in Germany is at a point where serious debate — including on priestly celibacy and the role of women — and openness to doing things in a new way must be encouraged, said the president of the German bishops' conference.

"The church in Germany is experiencing a break. The faith can only grow and deepen if we are liberated from blocked thinking, in order to pursue free and open debates and the ability to take new positions and go down new paths.

"The church needs a synodal advancement. Pope Francis encourages this," said Marx. "We will create formats for open debates and bind ourselves to proceedings that facilitate a responsible participation of women and men from our dioceses.

"We know about the cases of clerical abuses of power. It betrays the trust of people searching for firm footing and religious orientation. What must be done to achieve the necessary reduction of power and to construct a fairer and legally bound order will be to clarify a synodal path."

Germany's bishops said they are still working on how to move forward following the sexual abuse scandal and other pressing issues."Many voices can be heard saying that there must be a concrete list of measures. I can only say in reply that we have this catalog and we are still working on the points named there," Marx said.

During the meeting, the bishops heard the analyses and opinions of theology professors, female administrators within the church and church officials on issues pertaining to the sexual abuse crisis, church law, women in church administration and Catholic sexual morality.

"We treasure celibacy as an expression of religious commitment to God. How far it must adhere to the witness of priests in our church, we will find out," he said.Marx also said Catholic sexual morality is in need of development. "We perceive that we are often not versed in questions regarding modern sexual behavior," he said. The cardinal said he was aware that the results of the conference would not satisfy many people.

"Not all of the findings of our discussions will meet with your understanding," he said. "For this reason, we ask for your accompaniment in prayer, your support and your critical voice. Only thus can we advance together as the people of God." He also acknowledged the widespread disillusionment among German Catholics.

"At this assembly, we have seen, heard and experienced that you, the believers in whose service we stand and with whom we feel bound in community, accompany our consultations with criticism," said Marx.

He thanked the faithful for their prayers and their criticism.

"We would like to tell you that we see and hear you. Your criticisms, worries, hardships, doubts and your demands," he said. "I tell you sincerely — we understand it."Marx also commented on his experience attending the Vatican summit on protection of minors, convened by Pope Francis.

"It (the conference) was not about a hastily assembled list of measures, but rather a globally realistic view and the awareness: We bear responsibility to the victims across the whole world," he said. "None of us can negate or completely taboo the problem any longer."

During the conference, the bishops revealed that one of the steps in sexual abuse reform mandated by Germany's federal government has been postponed.

"We have postponed work regarding monitoring areas of intervention and prevention in recent months, not least of all because we just held a major Catholic-oriented symposium last November on the theme of monitoring," said Bishop Stephan Ackermann of Trier, spokesman for the bishops' conference on child abuse issues.

Ackermann explained that church officials, diocesan abuse prevention staff and an independent commission had participated in the previous year's discussion.