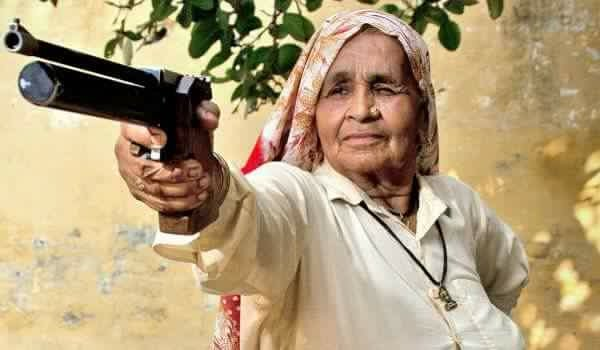 Johri: The 89-year-old woman stood in the courtyard of her home in northern India’s Uttar Pradesh state and picked up an air pistol. She tucked her pink head scarf securely into the waist of her long skirt and steadied her arm, looking through the sights at her target, a bottle about 12 feet away. She fired, and the bottle came tumbling down.

“You need to focus only on the target — forget about other distractions,” she said, breaking into a smile.

Chandro Tomar may look like a typical Indian grandmother, but she’s anything but: She’s believed to be the oldest professional sharpshooter in the world, and she has dozens of medals to show for it.

She’s also a feminist icon in India, having mentored and coached dozens of young women in her village and beyond for more than 20 years. There’s even a Bollywood movie, “Saandh Ki Ankh” (“Bull’s-Eye”), based on her life and that of her sister-in-law, Prakashi Tomar, a fellow competitor.

Tomar was over 65 when she first picked up a gun, and the arrival of a diminutive older woman from the rural heartland — dressed in her traditional long skirt and head scarf — initially provoked derision and laughter among participants and spectators at professional competitions. Since then, she has won over 25 medals at state and larger contests, usually competing against men who’ve been shooting professionally for decades.

Yet more than her fame and her shooting skills, she takes pride in having paved the way for countless women, including many in her own family, to take part in an activity that can be a ticket to a better life through sports scholarships and job opportunities.

“I wanted to encourage young girls everywhere to get into the sport and expand their horizons,” she said.

Today, the part of western Uttar Pradesh State where she lives has dozens of shooting clubs, and hundreds of children take the sport seriously. But things were very different 20 years ago when Tomar started out.

Gun laws in India are strict and weapons prohibitively expensive, since most are imported. Only members of royal families and people with military backgrounds had any experience with sport shooting at the time.

The region that is home to Tomar’s village, Johri in Bagpat district, is mostly rural, with acres of sugar cane fields and a few brick kilns. There were hardly any jobs, crime rates were high and poverty was endemic.

In 1999, Johri got its first shooting range. It was fairly rudimentary, and the guns were air pistols, which use pellets rather than bullets, rather than actual firearms. But its founders, Rajpal Singh and Farooq Pathan, said they believed that teaching young children to shoot could provide valuable skills and help discover talent.

Trying to drum up interest, they held a contest and gave away 50 air guns as prizes, said Pathan, who comes from a family of professional shooters and is now a shooting coach with the Sports Authority of India. “The air guns motivated the kids to come and try the sport,” he said.

Tomar took her granddaughter Shefali to the range one day. They were the only women or girls there, and Shefali, who was 12, felt nervous handling a gun. Watching the girl fumble, Tomar stepped in. “I told her, ‘Why are you so nervous? Just watch me,’” she recalled. “I picked up the gun, loaded it and fired. It hit the bull’s-eye.”

It was the first time she had ever picked up a gun.

Pathan was impressed but figured that the shot was a fluke, she said. “So I fired another shot and hit the target again, right next to the center.”

That was the beginning of her love affair with shooting. Watching her grandmother bolstered Shefali’s confidence. Eventually, she fired off a few rounds, too.

Pathan persuaded the pair to come back and keep practicing. But Tomar — fearing that her family would be horrified if they knew she was firing a gun — pretended to be chaperoning Shefali while they both perfected their technique.

Her worries stemmed from the patriarchal nature of much of traditional Indian society. In Uttar Pradesh, with high poverty rates and a lack of access to education for girls, most women are expected to marry young and look after their children and in-laws.
That’s the life that Tomar was expected to lead when she was born in 1931 into a large farming family, the only daughter among five siblings. Her days were spent shadowing her mother as she did her chores, and with 70 members in the household, there was always work to be done.

Having never attended school, she married at 15 and spent the next 50 years raising her family. “The farthest I ever went was out to the fields, to give the men their lunch or to help out sometimes,” she said.

Her weekly visits to the shooting range were the first time that she had had an opportunity to do something solely for herself.

“I still feel excited every time I pick up a gun,” she said.

In time, her sister-in-law, Prakashi Tomar, joined her and Shefali, and proved to be a crack shot herself.

Some months after she started training, Pathan enrolled a team from Johri in a shooting championship in Punjab State, about 130 miles away. Several children were selected, including Shefali Tomar.

Her granddaughter, who now competes internationally, won a gold medal. But when a local newspaper published an article with their photographs, there was an uproar at home.

“My husband and his brothers were very angry,” Tomar recalled. “They said, ‘What will people think? An old lady of your age going out to shoot guns? You should be looking after your grandchildren.’”

They forbade her to go to the range, she said, although her children supported her. “I listened to them quietly,” she said of the men, “but I decided to keep going no matter what.”

As a shooting team coalesced in the village, the Tomar family provided nearly half a dozen members, including Prakashi Tomar’s daughter Seema and granddaughter Ruby.

In a conservative community where women had to cover their heads and faces when speaking to men and avoid eye contact with male strangers, Chandro Tomar went door to door to encourage families to let their daughters learn the sport.

She managed to win over reluctant parents who worried about their daughters’ safety while traveling to competitions across the country or even just across the village.

“Dadi was the first one to encourage us to step out of the house — she gave us a lot of support,” said Ritu Tomar, using the Hindi word for grandmother despite being no relation to Tomar, under whom she started training at age 12. Ritu Tomar went on to become a national-level shooter and is now a coach herself.

As the team started winning medals, the jeers turned to admiration. Johri has now produced nearly 30 national-level shooters, although balancing such a career with marriage and in-laws remains difficult for most young women.

Over the years, Tomar has become a celebrity, travelling widely across the country for championships and speaking engagements, where she discusses female empowerment. The family is now building a shooting range for underprivileged children in their house so that more will have access to the expensive sport.

Now nearly 90, she doesn’t wear glasses and she touched her toes to show how flexible she was. What’s the secret to her strength and agility?

“All the household chores I used to do from a young age, like grinding the wheat by hand, milking the cows, cutting the grass,” she said. “It’s important to stay active. Your body might grow old, but keep your mind sharp.”