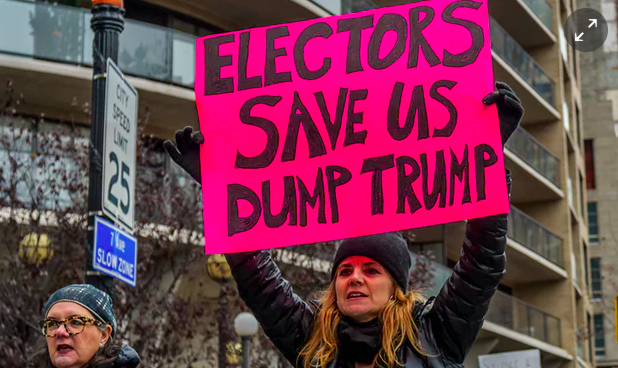 Liberals holding up Monday’s vote as a last-ditch chance to avoid Donald Trump’s presidency are banking on a pipe dream. It’s time to be more pragmatic. How does the electoral college work – and can it stop Trump?

(In the pic: ‘For alarmed politicians and citizens looking for ways to roadblock Trump, trying to exploit a loophole in the balky democratic machinery is misguided and naïve.’ Photo: McGregor/Pacific/ Barcroft )

(Note: According to this article in UK’s Guardian Trump must be dumped, which is impossible. According to another writer in the Guardian US is now more politically divided than at anytime since the civil war since the elected president is one who lost by nearly 3 million popular votes.

According to the mind of the founding fathers the purpose of the electoral college  was to “afford a moral certainty, that the office of President will never fall to the lot of any man who is not in an eminent degree endowed with the requisite qualifications”. A vast majority in both Republican and democratic parties now agree that this purpose has been totally defeated in this election. Then why don’t they dump it, if America is a democratic nation, a nation which boasts of exporting democracies? Only the rest of the world would have to be crazy to accept their version of democracy. james kottoor, editor)

For the liberals most horrified by the coming coronation of Donald Trump, the last stand is the electoral college. On Monday, 538 electors will gather at America’s 50 state capitols to cast their ballots for the next president. They can vote any way they choose.

Convincing electors to defy the voters of their states to block Trump, the incendiary Republican with authoritarian impulses and somehow elect Hillary Clinton (or anyone else) is a fantasy – but a potent one. The Hamilton Electors, a small dissident group led by two Democratic electors, is driving the charge, arguing that their namesake, Alexander Hamilton, justified the electoral college as a way to prevent unfit candidates from taking office. If they flip 37 Republican electors, an all-but-impossible task since many of them are politicians or party officials, Trump cannot become president.

If our protests against Donald Trump aren't strategic, they will fail

There are many reasons to revile this quirk of American democracy. It renders the popular vote meaningless and disenfranchises populous states at the expense of smaller, more rural states now exerting outsized influence on the political system. Trump, like George W Bush, will take office having won fewer votes than his opponent, an oddity that rightfully perplexes people around the world.

But for alarmed politicians and citizens looking for ways to roadblock Trump, trying to exploit a loophole in the balky democratic machinery is misguided and naïve. Never mind the backlash such an effort would entail – the thousands, if not millions, of apoplectic Trump voters pouring into the streets to protest an election they would see as stolen. The real fight must come later.

Trump poses a far more conventional threat, one that liberals sometimes ignore as they fume over the “alt-right”, Trump’s similarities to long-dead dictators and his erratic tweeting: unvarnished, uncompromising conservatives control the White House, the Senate, the House of Representatives and nearly two-thirds of governorships. Even when Bush presided over a Republican-controlled Congress in 2001, many moderates without a reflexively nihilistic view of government could be found in the GOP. No longer.

In 2017, Trump will be in a position to rubber-stamp a Republican agenda that threatens to eviscerate the remnants of the New Deal consensus. If he erratically swerves left, Mike Pence and other purebreds surrounding him will keep him mostly in line.

Rather than waste energy with an electoral college fight, liberal politicians and activists should be prepared to obstruct Trump every chance they get once he is in office. That is, they should do the same thing the GOP did to Barack Obama. As a unified oppositional force, they torpedoed much of his agenda and grew their party to the point of where they are today: a transformational power prepared to wrench America in an utterly new direction.

Democrats must force Trump to own his failures when they come and hold him to account when his lofty promises to uplift the white working class inevitability aren’t fulfilled. In turn, they must offer a vision of their own, and convince inevitably disaffected Trump supporters that the Democratic Party, often just a home to mealy-mouthed centrism, has a place for them. Locally, anyone committed to resisting Trump must organize. Democratic states and cities will be bulwarks against the worst incursions of a Trump presidency.

A closely divided Senate will lend many opportunities for Chuck Schumer, the Democratic minority leader, to frustrate Trump, and he should. But the real action will be in towns, cities and counties where Republicans have better mobilized their older, whiter base to show up and vote. Organizing against Trump will mean dominating races for school board, city council, state senate and governor, creating leaders who will rise to thwart the GOP and ensure the survival of the social safety net.

In January, Trump will be sworn in as the next president of the United States, an election he won fairly in a flawed system. The electoral college fight will recede and the real war will begin as Trump, untested, learns that governing a fading empire is not like rallying in a football stadium, with only the faithful chanting your name.