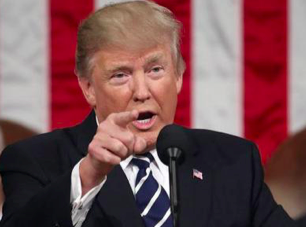 Cover photo: ‘Superficially at least, this was a different President Trump from the one who has so dramatically divided America and so understandably alarmed the world.’

The contrast between the presidential inaugural and the address to Congress was striking. But there are still two Donald Trumps and neither of them is good.

(Note: Uk’s Guardian sees his speech as a welcome relief from his past performance of attacking anybody and every body, especially the US press and others who presented him as a President who lost popular vote miserably.

He presented himself as a different President – conciliatry than combatitive, reaching out to those whom he antagonized earlier – blacks, Muslim, Jews. He was unifying divisions at home and respectful to opponents everywhere, NATO for instance. His speech showed he was trying to grasp the complexity of his job as President. He was reaching out to Democrats whom he needs to roll out his agenda.

The Hindu sees him failing to address main concerns, though he appeared more Presidential. On immigration his stress now is on “merit-based immigration” not detain and deport all illegal ones. Points out, that his assumption illegal immigrants commit more crimes than natives, is contrary to facts. Similarly factual inaccuracy weakens his statement that US is losing out in global trade and taxing, points out the Hindu. All said his speech encourages than discourages the world community. Let more consensus emerge on the global front. james kottoor, editor).

By his own standards, President Trump’s address to Congress was something of a welcome relief. Five weeks ago Mr Trump delivered the most rebarbative inaugural address in modern US history. Since then he has abused the American press as enemies of the people, picked fights on social media, gone to war with a department store chain about his daughter’s clothing brand, got into stupid arguments about crowd numbers at his inauguration and continued to insist, in defiance of all fact, that he did not lose the popular vote in November.

Only last weekend his chief strategist Steve Bannon told a conservative audience that the Trump administration intended to have a daily fight with its enemies as it pursues its agenda of economic nationalism and the deconstruction – Mr Bannon’s word for destruction – of the entire regulatory state.

Judged against that backdrop, Tuesday’s address to Congress – a new president’s equivalent of the state of the union address – was more conciliatory. Superficially at least, this was a different President Trump from the one who has so dramatically divided America and so understandably alarmed the world. True, he structured his speech around many of the policy goals that have become his campaign hallmark: protectionism, infrastructure investment, tougher immigration controls, the wall with Mexico, scrapping Obamacare, a lobbying crackdown and increased military spending. But he clothed it in language that was more placatory. He reached out to black and Jewish Americans whom he has previously antagonised. He spoke more warmly of Muslims than he did on the campaign trail. There was no lashing out at China and other foreign nations and, in a week when Tinseltown is a sitting target, there was no snarling at Hollywood liberals either.

Much of this can be explained by the nature of the event. Congress – and in particular a Republican Congress addressed by a nominally Republican president – expects to be treated with respect,especially with an ambitious budget due to be unveiled later this month. Last week the Republican Senate leader Mitch McConnell said he hoped Mr Trump would give “a tweet-free, optimistic and uplifting message”. The president’s speechwriters clearly tried to oblige. There was unifying rhetoric. There were respectful notes about Congress’s role in crafting legislative responses. There were appeals for Democrats and Republicans to work together and reassuring remarks about international institutions, in particular Nato.

Mr Trump sometimes talks as though he is a dictator. That may indeed be his instinct. But he isn’t one. Congress is not his to command. His political impulses and theirs are different on issues such as entitlement programmes like Medicare and social security, as well as geopolitics. There are occasional signs, a few weeks into the Trump presidency, that he is beginning to grasp the complexity of the job. This week he admitted that he had not known how demanding the issue of healthcare would be. Clearly he was not paying attention while President Obama grappled with the problem eight years ago. But Tuesday’s speech contained several sections – on health, schools, immigration and crime, among others – in which it was implicit that compromise on some of the details would be necessary. Welcome, however erratically, to the democratic political world, Mr Trump.

This was just one speech. Yet there are no grounds for thinking, in this most chaotic and divided of administrations, that the battle between the disruptive Mr Trump and the more diplomatic one has been resolved, or will be. Mr Trump may hate the establishment but he needs it to enact much of his agenda – and most politicians on Capitol Hill face re-election in 2018. The big issues of the coming months – the budget, tax, healthcare, immigration, trade – are all political battlegrounds, both inside the Beltway and beyond it. Tuesday felt like Washington getting a little of its breath back.

Donald Trump sounds more presidential, but fails to address concerns about his policies

President Donald Trump’s address to the joint session of Congress was unusual insofar as he adopted a distinctly less combative tone on certain issues, and refrained from his melodramatic oratorical strategy of painting America as a nation facing a dark future in a dangerous world. Most striking in terms of the change in his tenor were his remarks on immigration. Through most of his election campaign, he frequently promised to detain and deport “illegal aliens” and build a wall along the Mexican border to keep “rapists” and drug dealers out. While the Department of Homeland Security has indeed carried out raids against undocumented immigrants in a number of major American cities over the past few weeks, Mr. Trump on Tuesday expressed his willingness to consider a merit-based system, rather than relying on lower-skilled immigrants, which could be achieved through “real and positive immigration reform”. Yet Mr. Trump appeared to blunt the positive impact of this long-awaited softening in his rhetoric on immigration when he announced a proposal to create an office to serve ‘Victims of Immigration Crime Engagement’, apparently a special agency with a mandate to focus on tackling crimes committed by undocumented immigrants. As before, the fact that multiple studies of the demographics of crime suggest that immigrants are less likely to commit crimes than native-born Americans has not deterred him from making such xenophobic proposals.

Mr. Trump is also likely to have been alluding to Indian fiscal policies when he spoke of a country that taxed U.S.-made Harley-Davidson motorcycles at a 100% rate. Even though subsequent reports pointed out that the sales of the motorcycle company have grown at a brisk pace of 30% over the past two years in India despite such taxation, it is Mr. Trump’s penchant for flirting with the idea of introducing protectionist measures in U.S. trade policy that is causing alarm in India and elsewhere.

It is hard to distinguish how much of Mr. Trump’s attack on the global trade system, which he blames for taking away Americans’ jobs, is bluster, and how much portends actual policy change. For example, among the multiple companies that he named in his speech as firms promising to invest in production lines on U.S. soil since November’s election, fact-checkers discovered that many had already made plans to do so during his predecessor’s time in office. This apparent lack of interest in factual accuracy and specificity on details seemed to echo through other parts of Mr. Trump’s speech — for example, in his glossing over precisely what “historic tax reform” his administration would introduce to enable U.S. companies to be competitive the world over. While many Americans may be willing to tolerate presidential strategies of purposeful equivocation, they are probably hoping that, at the very least, Mr. Trump’s speech may be an inflection point in his evolution toward a more conciliatory ethos.