Editorial in the Statesman! Vatican vacillates and the CBCI dithers! 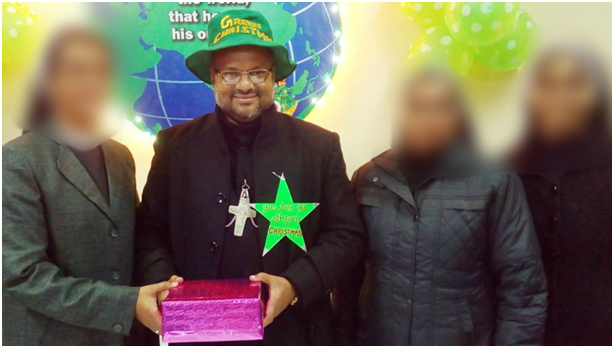 Bishop Franco Mullakal, the clergyman accused by a nun of rape. (Photo: jalandhardiocese.com)

Editorial in the Statesman, Kolkata

Note: The wonder of it all is, how the Catholic Church in India which parades itself like a peacock, as the champion,  proclaiming the “Good News” for the poor and exploited could fail so miserably,  shamefully to rise up to what she preaches!

Especially, the hierarchy of the church, the Bishops of India,  the Catholic Bishops Conference of India (CBCI), has disfigured the fair face of Jesus Christ. They have betrayed him with their vociferous silence (which amounts to complicity with the accused) and inaction to stand with the oppressed, marginalized and exploited nuns, who actually are the back bone and workforce of the Church in India.

Compared to the Bishops, the laity have been outspoken and much  better witness to Jesus who has been the embodiment of Truth, Love, Light and Transparancy  (“I have said everything in public”). Bishops have forfeited their right to stand for the  oppressed and those who are trampled underfoot. Instead they have sided with the comfortable class and betrayed their Master.

It is not the first  time that an accused Bishop has failed to step aside to facilitate a fair enquiry. Our friend Cardinal Alanchery has not done it even after repeated pleas by many including the CCV. All the articles sent to the Indian bishops (CBCI) have fallen on deaf ears. One phrase in the editorial says it all: “VATICAN VACILLATES AND THE CBCI DITHERS!”

All that the CCV can say briefly and sorrowfully is: “Father forgive them, for they know not what they do!” Even though we doubt very much, if the bishops believe in that prayer of Jesus! james kottoor, editor ccv.

Please read below the Statesman’s Editorial

Vatican vacillates and the CBCI dithers. The sum total of that reluctance to face a challenge square-on erodes the credibility of the administration of the Catholic Church in India which could actually impact the reputation of the religion itself. Particularly since cracking down on sexual abuse is not a strong point of Pope Francis’ leadership.

The Kerala High Court is monitoring the police investigation into allegations of repeated sexual offence by Archbishop Franco Mulakkal of Jalandhar, but an impression persists that the cops are buckling under the pressure of the powerful religious leadership. Mercifully thus far the politicians have steered clear of murky waters, but given the overall denigration of minority communities in the prevailing political turbulence, that kind of snowballing is not unexpected.

For this, the Catholic Church will have to accept the responsibility of bringing all Christian institutions under a cloud ~ it would be craven to underestimate the gravity of the situation. Those who frequently flay minority culture have been provided ammunition, the sacrificial altar being laid out by the failure to perform a sacred duty. It is a well-established principle that when allegations are under investigation the principals in the narrative step aside from office so that an unfettered, influence-free probe is facilitated. Without commenting on the veracity of the charges levelled by a 41-year-old nun, that Franco Mulakkal remains in office is simply unacceptable.

The CBCI (Catholic Bishop Conference of India) should have lost no time in advising him to take a “leave of absence” until the probe was concluded. How fellow Bishops feel comfortable with the raging controversy is intriguing, inexplicable. Peer pressure ought to have been exerted. Mulakkal’s protestations of innocence, claims that he is being persecuted for enforcing discipline etc would have found greater acceptance had he elevated himself above the average criminal who contends that he is being victimised and framed.

The concerted bid to assassinate the character of the nun ~ she has been slammed as a “prostitute” by an MLA ~ only further queers Mulakkal’s pitch. It is both illegal and immoral to descend to such depths of genderabuse. The protest by a handful of nuns attracts much sympathy, particularly since the discipline of the convent is no secret. Even if some of the nuns have been misled they merit salutation for mustering the courage to speak out. This is by no means the first complaint of exploitation: only that seldom before had the “sisters” found the strength to declare “Me Too”.

The Church is capable of having a competent, comprehensive inquiry conducted into a host of issues that might elude the criminal-justice system. There are enough legal experts, Christian and from other faiths. to undertake such an inquiry that will convince the congregation that the Church plays fair. And has the moral fibre to do what is right ~ which goes far beyond the enforcement of criminal law.

As per reports on page 9 of the Sunday Statesman Kolkata dated 16 September 2018, Bishop Franco Mulakkal facing a probe after a nun accused him of rape, has handed over administrative responsibility of Jalandhar Diocese to a senior priest, even as a group of priests on Saturday extended support to the protest by various Catholic reformation organisations seeking justice for the nun.

In a circular addressed to priests, nuns and brothers of the Diocese, the Bishop wrote:

“In my absence Msgr Mathew Kokkandam will administer the Diocese as is the normal practice when I am away from the Diocese.”

He also requested them to continue to pray for him and for the alleged victim and her supporters who have come out against him “so that divine intervention may bring  about charge of heart and the truth of the matter may be revealed.”

The Circular was issued on 13th September a day after the Kerala Police had asked him to appear before the Investigation Team on 19th September 2018.

The Kerala Catholic Bishops Conference (KCBC) had slammed the nuns’ protest saying that `it has crossed all limits’.

“We are here not to judge anyone.  We wish to see the Church delivering justice to the nuns,” a priest said.

Meanwhile the Kerala Police has decided to issue notice to the authorities of Jalandhar-based Congregation, Missionaries of Jesus, for allegedly flouting the anti-rape law by putting out photograph of the victim in a press release issued by it on Friday.