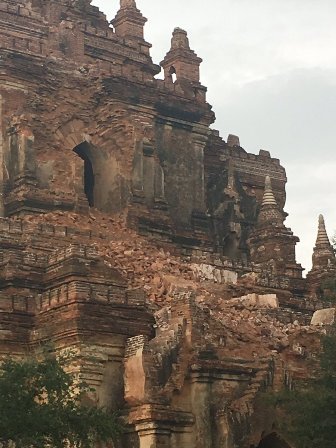 (Note: In the wake of yesterday's repeat earthquake in Myanmar, Kolkata, Bihar, Orissa and Assam felt the tremors for about 10 seconds.  In terms of the intensity at Myanmar it was 6.8 Richter Scale (4 killed, 68 pagodas damaged by 6.8 magnitude earthquake in Myanmar, officials say – Myanmar Times), in Guwahati it was

6.2 , while in Kolkata it was 5.6.  To add to Kolkata's woos, there was a news report a few days ago in ABP Ananda Bengali Channel that large rats were digging holes in the lanes and road and were damaging the foundation of houses.  A century-old building on Guruprasad Chowdhury Lane, Amulya Niketan, is under threat from the rats, which have also damaged a specially designed three-storeyed building beside Amulya Niketan. Sanjukta Sen, one of the residents, said that the rat menace was growing by the day. "We have been suffering due to the practice of throwing left-overs on the roads. We have asked our neighbours to stop throwing garbage on the road, but all appeals have fallen on deaf ears," Sen alleged. Atin Ghosh, member, mayor-in-council overseeing the KMC civil engineering department said the civic body was trying to take up a befitting method to eliminate the menace.-  ISAAC GOMES) Tremors were felt in northeastern India as well as Bihar, Odisha and West Bengal in the 6.7 magnitude quake that occurred a little after 4 pm.

There were no immediate reports of human casualties or damage to property in the earthquake that had its epicenter 58 km deep below the earth’s surface at Chauk, a small town in northcentral Myanmar, according to the National Centre for Seismology, a unit of Ministry of Earth Sciences.

The US Geological Survey put the intensity of the quake at 6.8 on the Richter scale.

At least 38 people were killed when a 6.2 magnitude earthquake rocked central Italy after 3 am on August 24.

In India, tremors were also felt in several parts of northern India including Gurgaon, Manesar and Bhondsi in Haryana, authorities said.

Panic stricken people in Kolkata, Patna and Guwahati were seen rushing out of their homes and offices into the streets immediately after the quake struck.

Director of Bihar’s Met office AK Sen said some old buildings developed cracks following the quake but there was no immediate report of any casualty or damage to property.

Offices and colleges in Kolkata were evacuated, people there talked of “horrible shaking” and said the tremors lasted at least 10 seconds.

“We felt the tables were shaking,” said a young college student.

“Everyone ran away from the classroom, we were like Oh My God” said her friend.

Metro services in Kolkata were halted after the tremors; they have resumed now.

Wednesday’s quake in Assam followed two other tremors that shook the state on Tuesday. Earthquakes measuring 3.1 and 5.5 on the Richter scale had jolted Assam at 5.30 am and 7.41 am on Tuesday.

Earlier this week, an earthquake epicentred in Haryana and registering at 3.7 on the Richter scale was felt in parts of Delhi.

As per Kolkata's Sunil Lucas who is President of Signis India, Signis Asia Assembly in going on in Myanmar now.  Let us hope all the participants are safe. In Italy, one very young priest from the Darjeeling Diocese, Fr Arun Francis Tamang, who served a stint as Professor at Morning Star Seminary Barrackpore, is in Rome for higher studies.  Fr Arun is brilliant in his academics and is a very talented musician.  His elder brother, Anup Martin is a senior MC Brother, now posted in Raiganj.

We also have Fr I.C. Jacob, the master musician from the Salesian Provincial House Kolkata, who also is serving his term in Rome. While Rome will be richer from his talent, Kolkata will be impoverished and will definitely miss his music.  He came for lunch to our house after one Christmas along with Fr Robin Gomes and played some wonderful pieces of music including Indian Classical, which I fortunately video-recorded. It is not known whether Nitika Kolkata which specialises in recording has recorded some masterpieces of this great musician.  I hope it is not another case of "a prophet is never respected in his home"! I sincerely hope the two musicians Fr Arun and Fr I.C. Jacob have met each other. Otherwise it will be a miscarriage of musical justice!

In the midst of all the natural calamities, let us pray for the safety of all, including the safe return of Fr Tom.