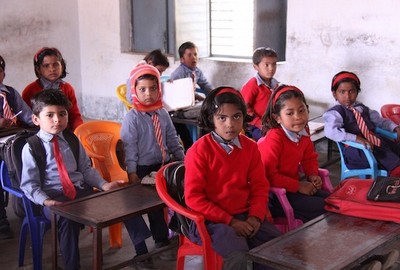 (In the pic: Indian students wait for their midday meal in a Catholic school that Jhansi Diocese operates for poor children. (Photo by Bijay Kumar Minj) Schools should be more inclusive and accessible to the poor, says head of bishops' education office.

An Indian church official said he was alarmed by recently released government data that shows at least 62,000 Christian children dropped out of Indian schools in 2014.
"The drop-out figure is alarming and quite disappointing because church people have been leading the education field for decades," said Salesian Father Joseph Manipadam, secretary of the Catholic Bishops' Conference of India's office of education and culture.
The data showed that in 2014 some 6.6 million students between the ages of 6 and 13 dropped out of school — 4.5 million from officially recognized lower caste communities, tribal people and Muslims. A total of 62,698 Christians also dropped out, Indian media reported May 17.
Father Manipadam said the majority of Christian dropouts were of dalit background — the formerly untouchable caste. He said dalit students often struggle both socially and academically, which provokes many to leave school.
"The data will force us to change our approach to education patterns," said Father Manipadam, who coordinates the work of more than 18,000 Catholic schools and colleges across India.
The Catholic Church operates the country's second largest network of educational institutions — after the government — from kindergartens to universities.
The largest number of Christian dropouts came from southern Karnataka state with 13,147; the Christian majority and tribal state of Meghalaya had 14,194, while Jharkhand, the center of the tribal church, had 4,214.
Church officials said the presence of Christian dropouts in these states indicates that many were either dalits or came from indigenous groups.
Father Manipadam said the data also revealed that the church needs to "streamline" its approach to education, "making it more inclusive."
"There will be no denial of admission because of financial or social status of the family of the students," he said.
He also said schools should start remedial classes for weaker students, rather than allowing them to fail and drop out. "Our schools should also start counselling to convince the weaker children," he said.
Father Z. Devasagayaraj, secretary of the Indian Catholic bishops' Commission for Dalit and Indigenous people, told ucanews.com that "dalit and tribal children are not treated equally in school and they are looked down upon."
He also said poverty forced many students to drop out to find work to help their families.
Source: UCAN