Don’t use communion as a political weapon! 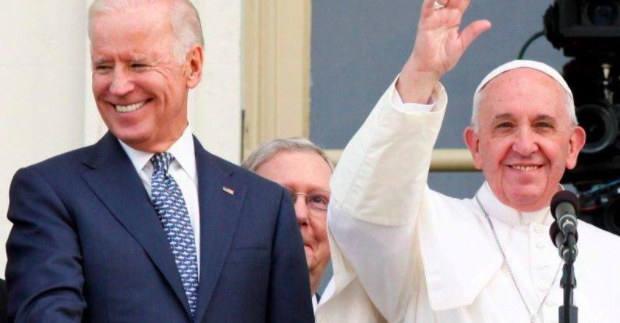 Don’t mix religion and politics, is the central message of the article below.

Communion to a Catholic, believing and practiing citizen of any country in the world including US is different from Communion to BIDEN   in particular who happens to be the newliy elected popular President who  openly  supports ABORTION!

Religion should not be dragged into public square, but must be kept in private domain is the accepted universal principle, which the US bishops seem are violating.

The big debate going on in the US among  Catholic Bishops is whether to deny communion to President Biden. Preaching with actions – WALKING THE TALK – is the most potent WAY to communicate one’s convictions. That is what precisely Pope Francis did when he arranged a Mass at the Vatican and gave communion to both the Argentinean President and his KEEP (not wife).

What is the message? It is not the duty of the confessor, priest, bishop or even the pope to peep into the bedrooms of those who come to them as political heads or officials! What political equity, decency and civilized behavior demands must be given to your honored guests!

Is this such a complicated logical conclusion for the US bishops to draw? Subsidiarity  is the one principle forcefully  taught by Vatican II. It means, don’t interfere once a job is entrusted to a competent person. US electorate has entrusted the Presidency to Biden. Then why should the Bishops interfere in it?

It started long long ago when Constantine took over the ruling of the church and Popes started arrogating to themselves infallibility even in temporal matters, both wrong!  We are today living in the 21st century!

Eucharist not a political weapon!

The clear message from Francis to US Bishops “is not to use access to the Eucharist as a political weapon.” Yet the fact is the American bishops are shockingly and ominously divided on communion & abortion issues publicly. So it makes awkward even for Francis when Pope Emeritus Ratzinger has not changed his view on communion either!

Soon after  becaming Pope Benedict XVI had written that politicians who persistently supported abortion rights were unworthy to receive the sacrament. It makes it appear two “infallibles in conflict.” That is the kind of “tragicomedy” the Catholic church is facing today.

We can feel comfortable and be at peace only when we can say “Long live Fratelli tutti and Pope Fracis” and that  after the demise of all organized religions and churchianitis.” That alone will bring real UNITY & PEACE to humanity! james kottoor(in Chicago) editor ccv.

Rome: The Vatican has warned conservative American bishops to hit the brakes on their push to deny communion to politicians supportive of abortion rights — including President Biden, a faithful churchgoer and the first Roman Catholic to occupy the Oval Office in 60 years.

But despite the remarkably public stop sign from Rome, the American bishops are pressing ahead anyway and are expected to force a debate on the communion issue at a remote meeting that starts on Wednesday.

Some leading bishops, whose priorities clearly aligned with former President Donald J. Trump, now want to reassert the centrality of opposition to abortion in the Catholic faith and lay down a hard line — especially with a liberal Catholic in the Oval Office.

The vote threatens to shatter the facade of unity with Rome, highlight the political polarization within the American church and set what church historians consider a dangerous precedent for bishops’ conferences across the globe.

“The concern in the Vatican,” said Antonio Spadaro, a Jesuit priest and close ally of Francis “is not to use access to the Eucharist as a political weapon.”

Pope Francis, who has explicitly identified the United States as the source of opposition to his pontificate, preached this month that communion “is not the reward of saints, but the bread of sinners.” His top doctrinal official, Cardinal Luis Ladaria, wrote a letter to the American bishops, warning them that the vote could “become a source of discord rather than unity within the episcopate and the larger church in the United States.”

The result is a rare, open rift between Rome and the American church.

Opponents of the vote suspect a more naked political motivation, aimed at weakening the president, and a pope many of them disagree with, with a drawn-out debate over a document that is sure to be amplified in the conservative Catholic media and on right-wing cable news programs.

Asked about the communion issue, Andrew Bates, a White House spokesman, said, “As the American people know well, the president is a strong person of faith.”

Pope Francis, along with the rest of his church’s hierarchy, explicitly opposes abortion, which they consider among the gravest sins, and incessantly speaks out against it. But that is not the same as punishing Catholic lawmakers with the denial of communion, which many here believe would be an intrusion into matters of state.

Among those leading the effort is Archbishop José Gomez of Los Angeles, the president of the U.S. Conference of Catholic Bishops, who has been passed over repeatedly by Francis for elevation to the rank of cardinal.

“The focus of this proposed teaching document,” Archbishop Gomez wrote in a memo, “is on how best to help people to understand the beauty and the mystery of the Eucharist as the center of their Christian lives.”

The conservative American bishops are largely out of step with Francis and his agenda of putting climate change, migrants and poverty on the church’s front burner. But Rev. Thomas J. Reese, a Jesuit priest, and a senior analyst with Religion News Service, said conservatives constitute at least half of the American bishops’ conference and could have the votes to begin the process of drafting a teaching document about who can receive communion.

It is unlikely the conservatives would be able to ultimately ratify such a document, which would require unanimous support from all the country’s bishops, or two-thirds support and the Vatican’s approval. But the debate promises to keep the issue alive and present a nagging headache for President Biden and other Catholic politicians who support abortion rights.

A good portion of the bishops want to avoid the question altogether. Already, 67 American bishops, about a third of the conference, and including top cardinals aligned with Francis, signed a letter on May 13 asking Archbishop Gomez to remove the item from the virtual meeting’s agenda.

One of those signees, Cardinal Wilton Gregory, the archbishop of Washington, has the ultimate decision on whether to deny communion to President Biden in the archdiocese of Washington. He has made it abundantly clear he will not.

Cardinal Gregory’s authority in the matter is a result of a compromise in 2004 when he himself led the bishops’ conference.

That year a group of conservative bishops sought to deny communion to then Democratic presidential nominee John Kerry for his support of abortion rights. Conservatives had more support in the Vatican then; the top doctrinal official, Cardinal Joseph Ratzinger, who soon after became Pope Benedict XVI, wrote that politicians who persistently supported abortion rights were unworthy to receive the sacrament.

But at a meeting in 2004, the American bishops chose instead to let individual bishops decide on a case-by-case basis.The whole situation took a political toll on Mr. Kerry, who lost the election and now, as President Biden’s climate envoy, would rather not relive those days.

On a recent visit to Rome, during which he saw the pope, Mr. Kerry preferred to talk about the Biden administration and Francis’ shared commitment to combat climate change.

“It’s been there and done that,” he said. “And it doesn’t always work out well for people.”But if anything, America’s church politics have become more polarized in the last 17 years. Some clergy close to Francis in the Vatican say privately that elements within the American church have become political and extremist.

Francis himself has said it is “an honor that the Americans attack me.” But on this issue, he, like Mr. Kerry, would prefer to talk about something else.

Sandro Magister, a Vatican expert with L’Espresso magazine, said that the issue was uniquely American, and was basically unheard of in Europe. He said, “The pope himself would rather not have this vivid debate.”But the conservative American bishops have for weeks made clear they want to do more than talk.

On May 1, the archconservative bishop of San Francisco, Salvatore J. Cordileone, issued a letter arguing that “erring Catholic” politicians who supported abortion rights should be excluded from communion. House Speaker Nancy Pelosi, a Catholic and staunch supporter of abortion rights, is a parishioner in his San Francisco diocese.

Soon after, Archbishop Gomez sent a letter to the Vatican’s chief doctrinal office informing it that the American bishops’ conference was preparing to tackle “the worthiness to receive Holy Communion” by Catholic politicians who support abortion rights at their June meeting.

The Vatican apparently had seen enough. On May 7, Cardinal Ladaria wrote Archbishop Gomez urging caution. He said it would be “misleading” to present abortion and euthanasia as “the only grave matters of Catholic moral and social teaching.”

If the American bishops were going to crack the door open on the communion issue, Cardinal Ladaria added ominously, they should be prepared to consider extending the policy to all Catholics “rather than only one category of Catholics.”The matter seemed settled. It wasn’t.

On May 22, Archbishop Gomez sent a letter to the American bishops defending the decision to schedule a vote, arguing — critics say with shocking disingenuousness — that doing so “reflects recent guidance from the Holy See.”