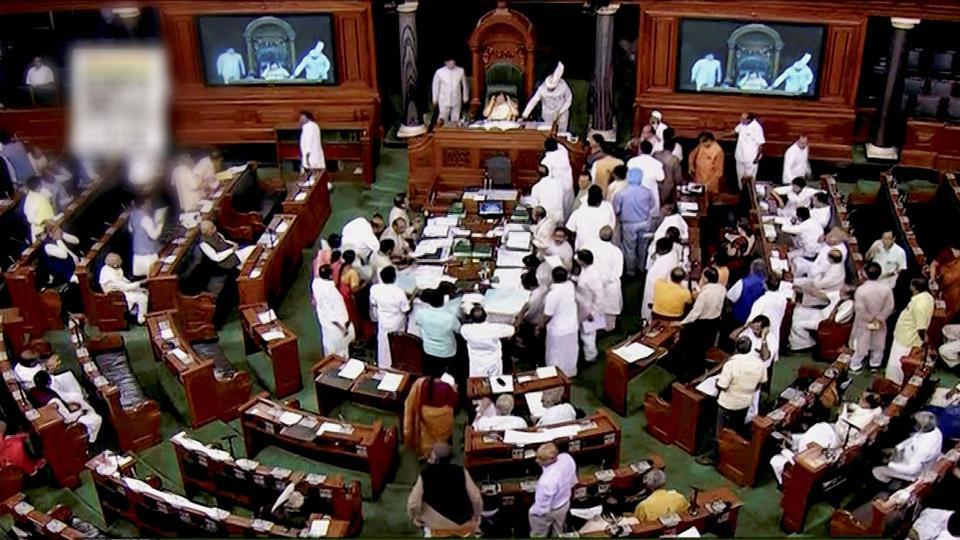 ests and disruptions throughout last week as opposition members demanded a debate on growing cow vigilantism and alleged targeting of minorities and Dalits in the country. This led even to suspension of six Congress Members of Parliament, for five days, for unruly behaviour during opposition protests in the House on the issue. They threw shredded papers at Speaker Sumitra Mahajan and the secretary general’s tables.  The Congress MPs suspended were Gaurav Gogoi, K Suresh, Adhiranjan Chowdhary, Ranjeet Ranjan, Sushmita Dev and MK Raghavan. The Speaker said the members had “persistently and wilfully” disrupted the House by tearing and throwing papers towards the chair, causing grave disorder.

Mr Kharge further said that Dalits and women were being targetted by the Modi Government on suspicion of carrying beef or while ferrying cattle.

Point to be noted here is even Mr Kharge called India or Bharat  "Hindustan" a term for which one normally blames RSS or BJP members.

Replying to Kharge's charges, BJP Member Hukumdev Narayan Yadav said Mr Narendra Modi has already asked states to take action against cow vigilantes and therefore it is for the state governments to deal with such crimes.

The BJP member is absolutely correct in his observation.  Though the Opposition is trying to raise a huge furore on cow vigilantism, their attempt can at best be termed "passing the buck".  For as per the Indian Constitution, law and order is a state subject.  Modi has just reminded the states not to look for excuses and do their constitutional job for the protection of state subjects. So it is up to the respective state governments, to come down on law breakers with a heavy hand and ensure miscreants are nipped in the bud. States cannot get away just by blaming the centre.

So it will be incorrect to entirely blame the present NDA government for cow slaughter ban and related issues. The state governments are equally responsible for not being vigilant on cow vigilantes.  They are "passing the buck" on the Centre and trying to fool the Aam Aadmi.

A reminder needs to be given to the six MPs who have suspended by the Lok Sabha Speaker. They should remember that they have been sent by the electorate of their constituencies, to the Parliament, not to hurl paper balls and other ammunitions (chairs, shoes and sandals) at fellow MPs, but to constructively debate on the pressing problems of their constituencies. Here is some worrying mathematics on the result of days of Parliament's session being washed out by protests and adjournments. Each minute of Parliament in session costs approximately Rs. 29,000 (Source: NDTV, 24th July 2015). The Rajya Sabha works for an average five hours a day, the Lok Sabha for six; a total 11 hours. For loss of a day's work at Rajya Sabha and Lok Sabha, an estimated Rs 1.91 crore of the taxpayer's money is lost. The loss for 10 days stoppage of parliamentary work works out to Rs 19+ crore.

Do our MPs care for this national loss? Most of them only care for clamouring in the Parliament for hike in their salaries and perquisites!

India paid Rs.176 crore to its 543 Lok Sabha members in salaries and expenses over the last year, or just over Rs. 2.7 lakh a month per Member of Parliament (MP), official data show.

MPs are entitled to Rs.50,000 per month as salary, Rs.45,000 as constituency allowance, Rs.15,000 as office expenses and Rs.30,000 for secretarial assistance. When Parliament is in session, they get a daily allowance of Rs.2,000. MPs are also reimbursed for 34 flight trips and unlimited rail and road travel for the year on official business (Source: The Hindu, 29th September 2015 – Updated 29th March 2016).