Doklam: What China stands to lose if it goes to war with India

(Note:  Irrespective of border disputes between China and India, the two countries should realise they are Asian giants and also world powers.  So going into a war will result in huge losses for both.  Modern warfare

is technology-driven and other than  whetting one's ego, it can cause telling damages on both countries.  China should not think it can have its way by browbeating India. India is vastly different today from what it was during Nehru's weak "Hindi Chini Bhai Bhai" premiership of 1962. In view of India's recent strategic understanding with USA, Israel and Japan, not to forget Russia – India's old ally, China should see sense and forego its muscle-flexing attitude. Then, both India and China along with Japan can concentrate on development and do wonders for improvement of the quality of life of Asians and the world at large. Isaac Gomes, Associate Editor, CCV).

Indian Army and the People's Liberation Army of China are facing each other holding their respective posts at about 150 metres from each another. Even though the border has not seen firing of bullet from either side for decades, China has shown aggressive posturing at all levels of government.

Jinping said that Chinese army was capable of defeating any invading enemy. The reference is curious given that the Chinese foreign ministry has incorrectly been claiming that Indian Army has entered its sovereign territory. 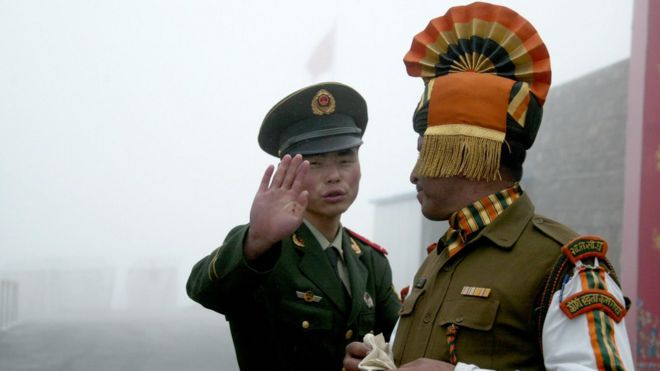 As per records, Doklam plateau belongs to Bhutan and by security arrangement with the Himalayan kingdom, India is responsible for its security. China does not have diplomatic relation with Bhutan which Beijing is desperate to have in order to extend its sway over the buffer country. This is part of what is called China's 'Salami Slice' policy.

However, several China experts are of the view that despite its aggressive talks, Beijing will not go to war with India over Doklam. In the event of a war with India, China stands to lose much more than India.

China is heavily dependent on the Strait of Malacca for its fuel supply. China gets most of its fuel from West Asia and Africa. According to China's state media reports, more than 80 per cent of its oil imports come through the Indian Ocean or Strait of Malacca.

Strait of Malacca is not very far from the Nicobar Islands where Indian Naval has one of the largest military bases. India can easily choke Chinese supply passing through the Strait of Malacca or Indian Ocean.

China can hardly afford to lose its energy supplies. It was the same fear that prevented China from helping Pakistan during the Kargil war. China was said to be inclined to come to Pakistan's aid but Indian response in the Indian Ocean foiled Chinese move during the war.

OTHER CHINESE ASSETS AROUND INDIA

China has said that if Doklam standoff turns into a war, India cannot expect Beijing to limit is strike in the Sikkim sector only. This was a clear warning that China intended to escalate the military engagement near India-Pakistan border as well.

In that event, China is much to lose. China has invested billions of dollars (USD 46 billion) on the China-Pakistan-Economic-Corridor (CPEC). The present value of the CPEC project is estimated to be USD 62 billion. In the event of an all-out war, China cannot expect India to safeguard Beijing's ambitious project in Pakistan-occupied Kashmir.

Chinese commercial stakes are also high at the Chittagong port in Bangladesh, Cocos Keeling in Myanmar, recently opened port in Djibouti and just acquired Hambantotat port in Southwest Sri Lanka besides the Gwardar port of Pakistan. All these Chinese establishments will have to face a hostile Indian Navy, which is capable of choking them in the event of war.

The commercial cost of any all-out war would be very high for China as its String of Pearls policy to encircle India may turn disadvantageous for it.

China incidentally has positive trade balance with most of its neighbours because of its export-oriented economy. A war with India is bound to impact its trade relation not only with New Delhi but with other neighbours as well.

A war with India may have its ripple effect in the South China Sea, where Chinese hegemony is challenged not only by Vietnam, Philippines, South Korea and Japan but also by the United States. The US has categorically rejected Chinese sovereign claim over the South China Sea. The ongoing tension may further worsen. China uses both its economic and military muscle to force most of the Southeast Asian countries to toe its line. Hambantota port of Sri Lanka was acquired by China last week as part of what is called 'debt-trap diplomacy'.

India has, however, never bowed down to Chinese carrot and stick approach. Strategically, India is located at advantageous position with respect to China where it can affect Beijing's energy lifeline and its latest One Belt, One Road (OBOR) initiative.

Further, unlike the times when India and China engaged militarily, New Delhi has now better partnership and cooperation with the leading powers of the world. India, the United States and Japan held their 10-day Malabar 2017 naval exercise in the Bay of Bengal in July.

Around the same time, the US approved the USD 2 billion deal for the sale of surveillance drones and another USD 365 million pact for the sale of military transport aircrafts to India. These were seen in Beijing as signs of growing Indian influence in the geostrategic game.

China cannot expect the US and Japan to remain silent when it goes to war with India especially when Donald Trump administration is looking for excuses to impose restrictions on Chinese imports in order to give a fresh push to manufacturing sector under America First policy.