‘Divide and Rule’ is the way in Politics! Anti-Catholicism is real, it’s turning Catholics against one another 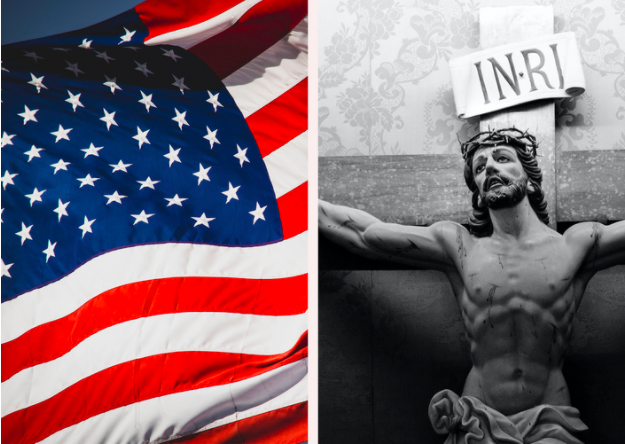 Can Catholics be real Americans? This question has vexed many of us since 1776.Photo by Jon Sailer/Christoph Schmid on Unsplash (composite by America)

Present Catholicism, the Constantenean, is ‘Oximoron’. It is now being replaced by the Real Universal, including all humans, believers and atheists, thanks to Pappa Francis, all for the better! The WASP (white-anglo-saxon-protestant) goes, the real Universal of Francis Pappa comes in, in US and the whole world!  Biden vs Trump conflict!

It is in this context one has to see the emergence of Biden in  US elections. His followers stick to pro abortion, as does Francis. In fact ever since the publication of Pope Paul’s Humane Vitae, they have been practicing Birth control, with a vengeance while labelaning themselves Catholics.  Biden calls himself a Catholic, and does what Francis states: ‘not to multiply like rabits’.

Political parties led by Trump is concerned only with where he can get maximum vote, by hook or crook! One can only hope US Catholics vote as they live their famly life! Let them vote to save their convictions, not their FACES! james kottoor, editor CCV.

There are many reasons to think we are not. Historically many Catholics have been immigrants, which is to say the wrong kind of immigrants: not White Anglo-Saxon Protestants. Ecclesially, we belong to a church from which the WASPs’ British forebears freed themselves, a religion suspected of allegiance to a foreign power in the Old World.

Philosophically and theologically, Catholics have long been associated with “illiberal” and “medieval” political and social doctrines, teaching supposed to contradict the dogmas of American democracy and Protestant civil religion.

When the Catholic faith of a public figure is called into question, this ancient history suddenly becomes painfully present in our own time. Many Catholics saw a return of just such anti-Catholic animus when U.S. Senator Dianne Feinstein told Judge Amy Coney Barrett in 2017 that “The dogma lives loudly within you.” That line, of course, has resurfaced in the wake of Barrett’s Supreme Court nomination.

Philosophically and theologically, Catholics have long been associated with “illiberal” and “medieval” political and social doctrines.

Some Catholics have pushed back against this narrative, however. American Catholics have come a long way since the anti-Catholic nativism of the 19th century, they argue. We are fully assimilated into society—with the exception of recent immigrants, of course. As Steve Millies recently tweeted, “It’s hard to be a victim as the hegemon. Catholics are the largest group of religious believers in the US. We have outsized social and cultural influence.”

So is Senator Feinstein anti-Catholic? I do not know. But anti-Catholicism is not just a personal prejudice: It is a tradition of American public life with its own language and tropes born of a long history in this country. The word “dogma” is uniquely suited to provoke a whole set of worries and tribal fears about Catholicism in mainline Protestantism and its secular successors, regardless of what the senator personally thinks and believes.

Yes, much that passes for “anti-Catholicism” today is political theater. It is predictable, scripted outrage. But it is trading on a very real history that serves to divide Catholics.

Indeed, one might object that Catholics become incensed only about certain acts of supposed anti-Catholicism, namely those that offend their partisan values. There is an important truth in this. Divisions between U.S. Catholics mean some actions will count as “anti-Catholic” to some Catholics and not others. Phrased differently: Some actions are intended to mobilize only some Catholics. Massimo Faggioli has recently called this “cafeteria anti-Catholicism,”

This is where we get at the heart of today’s controversies. As Liz Bruenig noted in The New York Times, U.S. Catholics are virtually indistinguishable “from the general population in terms of their political behavior, including their pathologies.” (That column had a provocative title: “Biden Could Be Our Second Catholic President. Does It Matter?”) This successful inculturation ironically makes it difficult for us to avoid engaging one another as political partisans, rather than as baptized members of the church.

Much that passes for “anti-Catholicism” today is political theater. It is predictable, scripted outrage. Our arguments about purported anti-Catholicism are no different. The argument over anti-Catholicism between Catholics becomes yet another proxy war for the bitter conflict over how Catholics ought to engage American culture.

And who benefits from this arrangement? Not Catholics. It is rather the guardians of the two-party status quo who are all too happy to secure their respective shares of the Catholic vote. As the Canadian theologian Brett Salkeld noted, “How convenient that both parties can take for granted that their compromises and vilifying those of their neighbors that little is left Catholic members will put so much time into justifying their own political for challenging the parties themselves with the message of the Gospel!”

This brings me to another objection often made: Anti-Catholicism is self-inflicted. Again, there is much truth to this. Catholics are no longer a defenseless, marginalized minority in the United States. We have long since graduated to marginalizing defenseless minorities. When priests abuse children and bishops cover up for them, when Catholics give into nativism against displaced persons who are often themselves Catholics, we are not innocent.

Catholics have to acknowledge that we routinely fail to witness a better way for the world. Another way anti-Catholicism is self-inflicted: Catholics are incredibly hateful to one another in this country. When Catholics attack each other, we reveal the incentives for others to exploit such divisions. The most casual perusal of Catholic Twitter reveals that the worst conflicts are intra-ecclesial.

What does all of this mean? Certainly not that two wrongs make a right. But Catholics have to acknowledge that we routinely fail to witness a better way for the world. When we choose hate and sin over love and virtue, then we have to wonder why we chose to stop preaching Christ. As Tommy Tighe recently tweeted, “If Catholics have to be hated or looked upon with contempt in today’s world, I pray it’s because we love our enemies and pray for those who persecute us.”

Many Catholics seem to want to invert the golden rule. They want to be treated the way they refuse to treat others, and indeed the way they refuse to treat their own fellow Catholics. No less, Catholics as a corporate body will for a long time bear the stigma of what evil men in the clergy did to the most defenseless members of the church. If Catholics want to criticize someone for how he or she is behaving in the public square, perhaps we could start by modeling a different way of behaving. We should repent for how we have harmed others and continue to harm others. And we should be at least as forceful in defending the defenseless as we are in defending ourselves.

If we take seriously the durability of anti-Catholicism in United States history, we see that common arguments against its presence have great significance for how we interpret and engage that prejudice. Anti-Catholicism is real, but American Catholics can choose how to respond to it. We could turn the temperature down on this debate if we acknowledge that anti-Catholicism is a real, multifaceted phenomenon that needs to be understood but does not always require sharp denunciation.

The First Amendment and the bar on religious tests for public office (the “No Religious Test” clause of Article VI) of the U.S. Constitution need to be honored and respected, of course. But beyond that, what should guide us? A Bible verse suggests itself: “If the world hates you, realize that it hated me first” (Jn 15:18). But even though the world hated Christ, he died for it. We should imitate Christ in that attitude, as in all things. (Bill McCormick, S.J., is a contributing editor at America and a visiting assistant professor at Saint Louis University in the departments of political science and philosophy.)