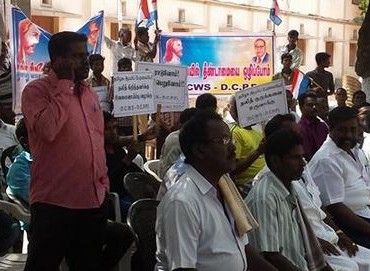 Coimbatore (Matters India) — Around 200 persons from the Dalit Christian Peoples Federation (DCPF) staged a demonstration on the St. Michael’s Cathedral Church premises here on Sunday seeking priesthood ordinance for a youth who was dismissed from a catholic seminary at Tiruchi about four years ago. They also sought fulfilment of their other demands, which includes treatment without discrepancy.

On Sunday, the protestors from Sivagangai, Madurai, Perambalur, Kumbakonam and Tiruchi had come to Coimbatore to meet all the bishops who administer the seminary – as they had come for the Tamil Nadu Bishops Council. The protestors and bishops were holding talks to resolve the issue.

DCPF leaders said that they would not withdraw their protest till the youth, Michael Raja, was ordained as a priest. The protestors also sought reservation for Dalit Christians from both the Union and State Governments and formation of a committee to uniform treatment, The Hindu reported.

Senior priests in the dioceses of Coimbatore denied caste-based discrepancy in the church. Denying action initiated against the youth from Sivagangai on caste grounds, they claimed that five others dismissed with Michael Raja are from upper castes.

DCPF coordinator A. Aruldas, however, said that they would wait for the outcome of the talks and decide on further course of action.