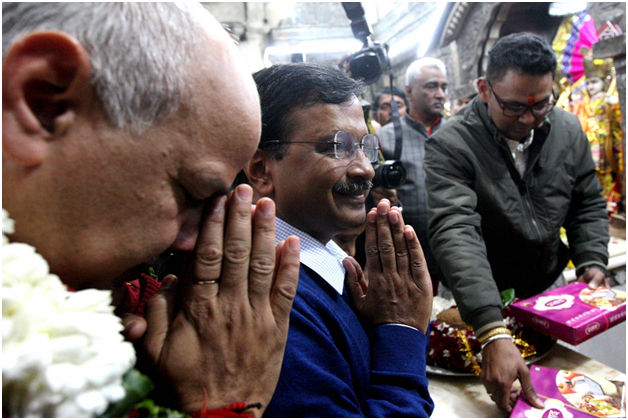 Note: “Kejriwal’s feat in Delhi was equal to that of ‘David vs Goliath” in the Bible, was one of the comments heard on TV. Modi and Shah had thunderd against, the epicenter of all protests in Shaheen Bagh would be ‘virtually a “referendum” for CAA and dumping of dare-devil daring of Kejriwal’s might over Modiji. Who has the humble pie to swallow? Pride goes before all catastrophic falls!

Shaheen Bagh was the hotbed of conflict, where the BJP concentrated their firepower to win it for sure and that went to AAP with a huge margin to none other, named Amanatullah Khan, with over 71,000 votes.  Ex-Congress Minister P Chidambaram commented: “AAP won, bluff and bluster lost!”

You can wake up even one fast asleep, but you never can one who is feigning sleep! May be the lesson to draw! Still we all must strive relentlessly  to help open the eyes of  those feigning sleep! james kottoor, editor ccv.

Kejriwal led his party from the front and achieved a hattrick, returning as Delhi chief minister in a spectacular fashion.

The AAP’s virtual clean sweep of Delhi ~ bagging only 5 seats less than its historic 67 seats in the 2015 Assembly polls ~ comes nearly eight months after it suffered a severe drubbing in the Lok Sabha elections in which the party scored nil with the BJP winning all the seven parliamentary seats with staggering margins.

The Delhi results seemed to have dealt a stunning blow to the BJP which sought to turn this Assembly election as virtually a “referendum” on the CAA. Spearheaded by Union home minister Amit Shah, the BJP had made its fierce opposition to the anti-CAA-NRC Shaheen Bagh protests its main plank for the Delhi Assembly election, consistently alleging and insinuating that this site has become a “den” of “separatists” and “anti-national” elements.

At his election rallies, Shah repeatedly called upon people of Delhi that they should express their “anger” against the Shaheen Bagh protests by “pressing” the buttons on EVM machines in favour of the BJP candidates so firmly that “the Shaheen Bagh protesters could feel its current”. Even Prime Minister Narendra Modi and BJP president J P Nadda addressed several rallies as part of the BJP’s high-voltage, aggressive electioneering during which the saffron party virtually sought to make it a Shah versus Kejriwal contest.

The opponents of the BJP accused the saffron party of undertaking a divisive, vitriolic campaign to polarise the voters by consistently highlighting the over 50-day sit-in protest by a group of women at Shaheen Bagh in Southeast Delhi. AAP candidate, Amanatullah Khan, won the Okhla constituency, which comprises of Shaheen Bagh and Jamia among other areas, by over 71,000 votes.

The AAP headquarters was decorated with blue and white balloons and big banners with pictures of Kejriwal. Delivering his victory speech at the AAP headquarters, Kejriwal said a new kind of politics has emerged from the Delhi Assembly polls with people rewarding the party which built schools, hospitals and provided cheap electricity round-the-clock. He hailed the AAP’s triumph as a victory of India.

“Delhiites, you have done an amazing thing (Dilli walo aapne gazab kar diya). I love you,” Kejriwal said in a brief address to joyous supporters and party workers there. “It is a victory of all and every family who considered me their son and gave us a huge mandate. In the country today, Delhiites have given birth to a new kind of politics, which is called “Kam ki rajniti” (politics of work),” Kejriwal said.

The people of Delhi have sent out a clear message that their vote would be for those who build schools, hospitals, mohalla clinics and provide cheap electricity and water to every household, and build roads, he said.

“It is the beginning of new kind of politics today. This is very auspicious message for the country and the politics of work only can take our country to the 21st century,” Kejriwal, flanked by his wife, daughter, son and senior party leaders, said from the stage. “Lord Hanuman has blessed us, may god give us more strength to serve people of Delhi in the next five years as we did in the last five years. We will make Delhi a beautiful city,” the AAP supremo said.

Later, during a roadshow, Kejriwal said, “Today is Tuesday, Hanuman-ji’s day. Hanumanji has showered Delhi with blessings.” Reacting to his party’s debacle, Delhi BJP president Manoj Tiwari said people must have given the mandate after careful thinking. “Our vote percentage has increased from 32 per cent to around 38 per cent. We hope that there would be less blame game and more work,” he said.

The BJP’s campaign focused on Shaheen Bagh and “nationalism” issues. The incumbent AAP, however, kept its focus on its government’s “achievements” in the fields of education, healthcare and infrastructure. The BJP was eyeing on Poorvanchali voters but failed to receive the backing of voters hailing from Eastern UP and Bihar too.

It was evident that the AAP garnered votes of people from all sections, regions, age and gender groups in the national capital. Ranging from Poorvanchalis to young voters, to first-time voters and residents of unauthorised (UC) colonies, everyone supported the AAP, backing its agenda of development and welfare politics.

Manoj Tiwari also claimed, “We don’t practice politics of hate. We believe in Sabka Saath, Sabka Vikas. A lot of things are said during the election according to the environment. We will introspect on the reasons of defeat.”

Interestingly, Congress did not seem devastated over its decimation. Senior Congress leader and ex-Union minister P Chidambaram said, “AAP won, bluff and bluster lost. The people of Delhi, who are from all parts of India, have defeated the polarising, divisive and dangerous agenda of the BJP. I salute the people of Delhi who have set an example to other states that will hold their elections in 2021 and 2022.”

The Delhi election was marked by bitter, fractious and polarising campaigning, trading of allegations and counter-allegations between the parties, brazen “hate” speeches, and divisive politics. It even witnessed violence and firing at anti-CAA-NRC protest sites at Jamia and Shaheen Bagh.

The Election Commission was at times forced to take some action as it gave leaders like Union Minister Anurag Thakur, UP Chief Minister Yogi Adityanath, and BJP MP Parvesh Verma a slap on the wrist over their “hate” remarks.