Deadliest mass shooting in US history 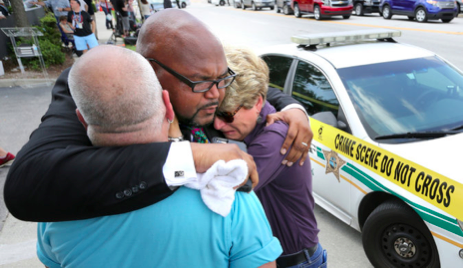 (Note: US, describes itself as the Biblical model city seated on a mountain top to inspire and draw the rest of the world to imitate. Sadly and regrettably it has made history for the opposite  —  shooting dead by one  single person 50 at once and seriously wounding 53 at Pulse, an LGBT  joint at Orlando, Florida. We mourn the dead, shed tears and pray that better sense return to the perpetrators and the country playing with fire – free access for all to guns to kill. How far is the Islamic fraternity or ISIS linked to this dastardly act? May it not be taken  as “proof of the pudding in the eating”  to tar and tarnish Islam, expected to be a religion of peace. On the one hand US has passed gay marriage bill, on the other hand it is unable to give protection to their legitimate freedom to assemble. What is more at stake: gay peoples’ freedom to assemble or their parading themselves to be gay? In either case the Federal government fails to protect their right and security which is part of Home Security it boasts of.  Mass murder at Pulse joint is an open declaration of the internal contradiction US lives, as expressed by Eric Garcetti, “we are targeted as Americans, because this is a society where we love broadly and openly, because we have Jews and Christians and Muslims and atheists and Buddhists

marching together, because we are white, black, brown, Asian, Native American. The whole spectrum and every hue and every culture is here,” which the envy of  “Orlando gunman couldn’t bear.”  The challenge to find a lasting solution is thrown at the two contesting presidential candidates, Hilalry and Trump. james kottoor, editor)

These locations are never random. These targets aren’t accidental. They’re the very vocabulary in which assailants like the Orlando gunman speak, and he chose a place where there’s drinking. And dancing. And where L.G.B.T. people congregate, feeling a sense of welcome, of belonging.That last detail is already in the foreground of the deadliest mass shooting in American history — and rightly so.

But let’s be clear: This was no more an attack just on L.G.B.T. people than the bloodshed at the offices of Charlie Hebdo in Paris was an attack solely on satirists.Both were attacks on freedom itself. Both took aim at societies that, at their best, integrate and celebrate diverse points of view, diverse systems of belief, diverse ways to love. And to speak of either massacre more narrowly than that is to miss the greater message, the more pervasive danger and the truest stakes.

We don’t yet know all that much about Omar Mateen, who pulled the trigger, again and again, in a nightclub whose name connotes life, not death: Pulse. We’ll be learning more in the hours and days to come, including just how potently homophobia in particular factored into his actions, how much ideological influence the Islamic State or other extremists had, how extensive his planning was, how far back he began plotting this, and how much he knew about Pulse itself and the specific composition of its crowd on different nights of the week.

But we can assume — no, we can be sure — that he was lashing out at an America at odds with his darker, smaller, more oppressive mind-set. The people inside Pulse were citizens of it. More to the point, they were emblems of it. In Pulse they found a refuge. In Pulse they found joy. To him they deserved neither. And he communicated that with an assault rifle and bullets.

The Islamic State and its ilk are brutal to gay people, whom they treat in unthinkable ways. They throw gay people from rooftops. The footage is posted online. It’s bloodcurdling, but it’s not unique. In countries throughout the world, to be gay is to be in mortal danger. To embrace love is to court death.

That’s crucial context for what happened in Orlando, and Orlando is an understandable prompt for questions about our own degrees of inclusion and fairness and whether we do all that we should to keep L.G.B.T. people safe. We don’t.As Florida Gov. Rick Scott spoke publicly of his heartache on Sunday, I saw complaints on social media about his own lack of support for issues important to L.G.B.T. people. Those complaints have merit.

But this isn’t a moment for identity politics, which could muddle the significance of the carnage. Yes, that carnage exposed the special vulnerability of L.G.B.T. Americans to violent extremists, recommending special levels of security.

And there was a frightening coda to it on the opposite coast, in the Los Angeles area, where a man with an arsenal of weapons was arrested en route to gay pride festivities.

But the threat isn’t only to L.G.B.T. Americans, as past acts of terror have shown and as everyone today must recognize. All Americans are under attack, and not exclusively because of whom we drink, dance or sleep with, but because of our bedrock belief that we should not be subservient to any one ideology or any one religion. That offends and inflames the zealots of the world.Often our politicians can’t find their voices. Sometimes their words are poignantly right.

President Obama, speaking about the victims on Sunday afternoon, said: “The place where they were attacked is more than a nightclub. It is a place of solidarity and empowerment where people have come together to raise awareness, to speak their minds and to advocate for their civil rights. So this is a sobering reminder that attacks on any American, regardless of race, ethnicity, religion or sexual orientation, is an attack on all of us and on the fundamental values of equality and dignity that define us as a country.”

And this was Eric Garcetti, the Los Angeles mayor, at a news conference: “Today we know that we are targeted as Americans, because this is a society where we love broadly and openly, because we have Jews and Christians and Muslims and atheists and Buddhists marching together, because we are white, black, brown, Asian, Native American. The whole spectrum and every hue and every culture is here.”