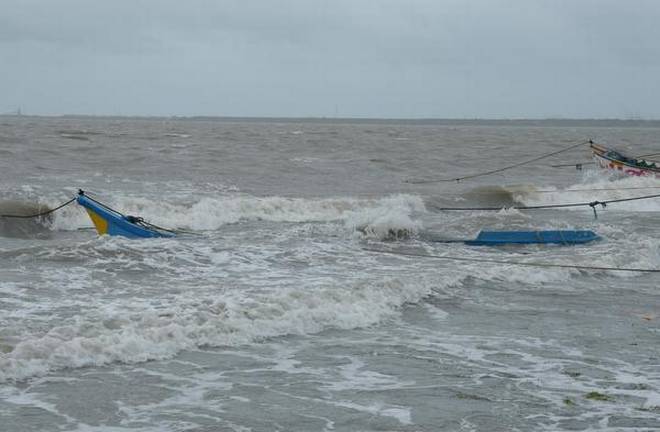 (Note: What is the greatest wonder in this world? It is, we believe, that two persons in this world are not identical in their physical, mental and spiritual make up and therefore every one of us has something to learn from our neighbour. Hence the saying: “You have to learn even from a grave digger.”

So look at how “Cyclone Ockhi” has prompted the writer to think and draw lessons for him. Compare it with your take on the same event and act like a ‘busy bee’ that visits every flower to draw in what is honey-sweet that can nourish you. james kottoor, ccv editor.)

The cyclone Ockhi has caused  wide spread destruction and  lose of lives in T.N. and Kerala. It is for the first time that a cyclone occurred off the Kerala coast. But cyclones and hurricanes are frequent in the Eastern seaboard of the Caribbean Islands, in the Gulf of Mexico creating havoc in Florida, Texas and other Eastern coastal states of U.S., the latest being hurricane Harvey.

The rise of global warming and environmental degradation were found to be the causes of hurricanes, cyclones, heavy unseasonal rains, flash floods and other natural disasters.

But tell it to the Bible thumbing people of the world especially to the Bible Belt of the Deep South of US; one is likely to be lynched or shot dead by the believers there. Die hard Christians believe that their God will take care of and set right everything because it is said in the Bible. The Bible says  that the humans were created by their God Yahweh around four thousand years ago and set forth on the earth to make use without restraint every thing, the animate and the inanimate and to  plunder the scarce resources as they please; grab every thing  by force without caring a damn about consequences.

It would appear that the root of evils and the Original Sin is found in the books of the Bible, the Old and the New. Incidentally, the Christian Churches of all hues have misappropriated the book of the Hebrews /Jews and transformed and distorted to suit their agenda to the disadvantage of the people to whom it originally belonged. The unbelievable fairy tales in the Bible are articles of faith for followers of Christianity.

The New Testament which had been cobbled up with questionable historical evidence, towards the end of the fourth century but has undergone numerous additions, manipulations, out right lies and propaganda away from the eyes and ears of the illiterate masses of followers of Christianity (hardly 5% of the them were even literate; the literate ones were  the monks).

For example, Peter was portrayed as the rock on which Christ would build his Church to substantiate the claim of the bishop of Rome as the Pontifex Maximus of all Christians of the world. Ironically the very concept of any church was from the imagination of the early followers of Jesus.  Another interpolation is the exhortation: “go and spread the good news to the whole world” which was added in order to justify the Crusades. Similar changes were made on an ongoing basis to establish a given point of view.

“Everything in New Testament has been fingered, lifted, compared, sewn in, re-sewn, interpreted, reinterpreted, over-interpreted, attacked, defended, denied, obscured, translated, transliterated, transmogrified or tranquillised, infinitely annotated, theologically violated “sacred text “…… the New Testament is or has become a bag of quotes “copy right free. It cannot prove any thing that everybody will agree with.“ (Tobias Churton of Oxford University.)

The choices made by writers and editors of the New Testament and about Jesus, his followers and enemies reflect their political and doctrinal view points. But to believe every thing written in the Bible calls for incredible intellectual acrobatics. In today’s context, does the “Word“ written in another time and place can be taken as literally true of all times and circumstances? Can any one with even a modicum of intelligence believe that the book was dictated by a Deity. Humanity the can be saved only when this so called “revealed word of God“ is discarded lock, stock and barrel. That will not happen easily; the New Testament will be with us like the "old man of Bagdad“ constricting human progress. That is the curse one has to live with.