Cowards die a thousand times before they actually do! Why Modi-Shah Hyped Bengal So Much? 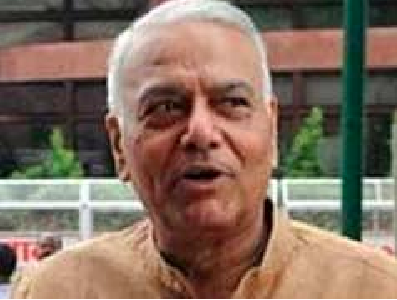 Recall how Modi himself had sat as the central High Priest to lay the foundation of the RAM TEMPLE on which to raise his dream of a RAMA RAJYA with Hindutva/ Hinduism (recall Advani’s Reth Yathra) as the sole religion opposed to Pakistan as a Muslim nation!

Modi has already achieved a second term as the nation’s PM.What blocks his onward lifelong march as a third-term or lifelong PM? It is the Hymalayan  hurdle, Mamatha, that stands  in his way to give finishing  touches to this firm foundation: the all powerful Bengal Durga! So she must be done away with!

Hence he planned purposefully a 8-phse Bengal polling – this is done by one who suggested even parliament election as a one-day affair to save money! But here, the issue is different  — Delenda est Cartago(Cartage must be destroyed), the Hymalayan  Didi/Durga must be eliminated for sure for smooth march forward! Yashwant Sinha below, explains this process more convincingly!

Modi-Sha power-crazy dictatorial team wanted to eliminate for sure this Hymalayan  hurdle that stood in their way so that they could march forward fearlessly as king and emperor for the rest of their life! They think BJP has half-achieved a CONGRESS-MUKTH BHARATH!

What stands in their way to unite are two factors:1.Each party leader wants to become PM if the united block wins; 2. Each party, left alone is afraid to fight Modi-Sha force alone. But the fact is all opposition parties have not really tried to unite.

What is it that prevents one to fight Modi-Sha? It is the fear of getting defeated! Who wins when two cowards meet? One who strikes first! The other then will think FAST with his/her feet! That is sheer psychology. That is where Mamata is exceptional and dares to give the first blow to win!

Cowards die a thousand times  before they actually die! That is where Mamatha stands out as exceptional, she takes risks and wins! So be ready to get defeated, ridiculed and laughed at, if you want to succeed! Wasn’t the Jew Jesus called a bastard, son-of-bitch, a wine bibber, friend of prostitutes and drunkards?

I know for certain I can’t see beyond my nose. So I blurt out what my naked eye sees and like the child say:  “The King is Naked!” The principle is “Say the truth and take the consequence!” Only make sure what you say is at least subjective Truth!” james kottoor(Chicago) editor ccv.

Elections in West Bengal are done and dusted: the Trinamool Congress, led by Mamata Banerjee, has scored a stunning victory, the BJP has been defeated, though compared to the three seats it had won the last time, it has done exceedingly well by winning 77 seats.

But it has failed miserably when compared to its own target of winning over 200 seats and forming the government. The Left-Congress alliance has come a cropper, unable to win a single seat. Mamata Banerjee is going to be sworn in today as Chief Minister of West Bengal for a third time.

Periodic elections are a normal feature of any democracy. The West Bengal elections would also have been a normal event like the other state elections which were held at the same time, had it not been for the hype created by none other than the Prime Minister and Home Minister of India. "Do mai, didi gai" became their war cry, repeated in one public meeting after another.

Despite the model code of conduct being in place, there is no restriction on boasting and making tall claims by political party leaders during elections. But when a claim is made by no less than the Prime Minister or Home Minister, one takes it more seriously. The reason is simple – they receive information not only through political sources but also through various governmental agencies at their disposal.

So when the Prime Minister and Home Minister of the country say "Do mai, didi gai" or make any other such claim, one has to take it more seriously. In meeting after meeting, they kept repeating that 'Didi' had already lost the election and kept playing other mind-games. They set a new low in political discourse and used shameful language.

But that is not the only issue the elections have raised. Why was such hype created around the West Bengal elections alone? The answer to my mind is simple. I have to give credit to the Modi-Shah team for planning things much in advance. Modi would not have become Prime Minister after marginalising leaders like LK Advani, Sushma Swaraj, Arun Jaitley, Rajnath Singh, Venkaiah Naidu and others but for such advance planning.

They calculated that in none of the other states was the incumbent Chief Minister due for a third term. And in none of these states would a prospective Chief Minister have acquired an aura at the national level like Mamata Banerjee would if she won the election. Nobody would have been a threat to the Delhi establishment like her with a victor. So if they wanted to win the 2024 Lok Sabha elections, Mamata had to be stopped at all and any cost.

Hence the deployment of such massive resources by the BJP in West Bengal; hence the repeated trips to that state by the Prime Minister and Home Minister; hence the complete disregard by them of the raging covid crisis; hence the gloating by the Prime Minister at the huge (arranged) crowds at his rallies, specially at Asansol, in complete disregard of covid norms. But nothing worked for them, as the results showed, because their approach was fundamentally flawed.

West Bengal is not like any other state in India. It has its own unique cultural traditions, its own rich language and its own pride. Its people would not be impressed by a couple of outsiders coming to Bengal at election time and imitating and irritating them. They were not impressed by a Prime Minister behaving like a goon when he thought he was regaling the crowds by chanting 'Didi-o Didi'. It hurt their fine sensibilities when these outsiders showed complete ignorance of facts, like when the Home Minister of India claimed that Tagore was born in Shantiniketan.

A Gurudev-like beard cultivated specially for the occasion impressed nobody. And finally, they disliked immensely the insult heaped upon the 'daughter of Bengal' by these outsiders day in and day out.

Separately, the Congress has been a major loser in these elections. The Left has at least won Kerala and created history by being the first government in 40 years to be re-elected. There was some hope for the Congress in Assam but it failed there also. The time for serious introspection for the Congress party is now. It cannot postpone it forever. If a non-Gandhi has to lead the Congress party, then so be it, otherwise we may soon see a 'Congress-mukt Bharat'. That will be tragic indeed. The Congress party must live, if not for itself, then at least for the country.

In the meanwhile, the future beckons. Opposition parties must come together and start strategising for 2024. But the road to Delhi this time passes through Lucknow. The Yogi government there has been a dismal failure on multiple fronts. It is ripe fruit ready to be plucked. So the immediate target of the opposition should be Uttar Pradesh. A world-class six-lane highway, built by Akhilesh Yadav, connects Delhi and Lucknow, which reduces the travel time between the two cities and makes the journey pleasant. So, capture Lucknow in 2022. Delhi will then be only a few hours away.(Yashwant Sinha, former BJP leader, was Minister of Finance (1998-2002) and Minister of External Affairs.Disclaimer: The opinions expressed within this article are the personal opinions of the author. The facts and opinions appearing in the article do not reflect the views of NDTV and NDTV does not assume any responsibility or liability for the same.)