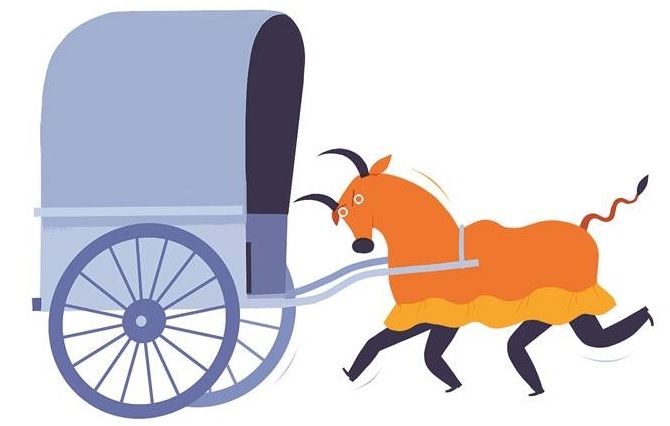 PM Modi has nothing to gain and everything to lose by pursuing a divisive social agenda. He has to worry both about the enemy within, and the one outside, his development tent

(Note: The writer of this article Surjit is a  New York based  senior India analyst. He gives below a distant and detached view on cow protection mania being played out in India. Mania, because who does not know that human beings deserve greater protection and care than animals like cows? Everythig is created for Man and man for Christ and Christ for God, according to Bible, in the hierarchy of creation.

Another cardinal principle to remember is eating and drinking differs from place to place. What marks out a human for his nobility is not what goes into his/her mouth while eating, but what comes out of one’s mouth while speaking. From the abundance of the heart the mouth speaks. Pearls of wisdom for the edification of the hearers alone will come out from a cultured mind, not offensive words that hurt and divide any community.

A third point to remember is that eating habits differ necessarily according to the food available from place to place as there is nothing sacred or sinful in items consumed. They are not decided by man-made religions. In this context the writer cites authoritative statements of learned luminaries like Vivekananda and Savarkar that Hindus and Indian were beef eaters from time immemorioal. From Ramayana and Mahabharatha times Hindus slaughtered the best bull to prepare a sumptuous dinner for an honoured guest.

To come to today’s age of globalization we had to give up outdated practices of the bullock-cart ages for good reasons. So there is no point in forcing people to go back and take up practices thrown out into the dustbin of items discarded. Instead what should guide every nation is light of reason and not blind beliefs to suit the vested interests of a particular  group in a nation. So the need of the hour is education of the illiterate and enlightenment of the blind among us, not sacricing  humans for protecting cows. james kottoor, editor).

Of the six innocent individuals transporting cows and calves bought at a cattle fair in Alwar, Rajasthan, one was a Hindu named Arjun. He was released by the vigilantes acting in the name of the cow; the other five, all Muslim, were severely beaten.

One of them subsequently died of the lynching by the Hindu mob. While most of the media has mentioned this fact and gone on to dwell on other horrendous details, I consider the Hindu being released as the most crucial in interpreting what happened, and possibly why it happened.

These facts, and the official reaction to them, illustrate several aspects about our degraded polity. First, one can rule out the claim that this was slaughter on behalf of a cow — if it were so, then why was the Hindu not guilty of the crime? This fact also puts a lie to the statement made by the Rajasthan Home Minister that both sides were to blame for this incident. Parenthetically, when will our not-so-savvy Indian politicians realise that they are operating in a social media-camera age and they cannot brazenly lie about crimes committed in the name of their reprehensible “ideology”.

What Alwar has done is to expose several BJP and RSS leaders to scrutiny. Rajasthan Chief Minister Vasundhara Raje has been surprisingly quiet; Nirmala Sitharaman, the Commerce Minister, felt compelled to point out that “cow protectionism was the spirit behind India’s freedom movement”. Really? Most people believe, perhaps mistakenly, that it was the “protection” of the Indian human (Hindu, Muslim, Sikh, Isai) from colonialism.

If one is looking for sources for the Hindu obsession with cows, one need look no further than the Hindu Constitution, otherwise known as India’s Constitution. Directive Principle no. 48 (does any other constitution in the world have directive principles? Just asking) states the following: “The State shall endeavour to organise agriculture and animal husbandry on modern and scientific lines and shall, in particular, take steps for preserving and improving the breeds, and prohibiting the slaughter, of cows and calves and other milch and draught cattle.” (emphasis added).

Why is the prohibition of cow slaughter part of a constitution ostensibly meant to protect individual human freedoms, not individual cattle freedom? Given that the gau rakshaks have concentrated on the white cow rather than the black buffalo, is this an admission of racism among the cow worshippers? The Constitution does not distinguish.

There isn’t much support for cow worship in ancient Hindu texts (Ramayana and Mahabharata), nor among Hindu scholars like Swami Vivekananda (Madurai lecture) or V.D. Savarkar (Samagra Savarkar Vangmaya).

Swami Vivekananda: “There are two sorts of truth we find in our Shâstras (contained in the Vedas and Smritis). The Smritis speak generally of local circumstances, of duties arising from different environments, and they change in the course of time. There was a time in this very India when, without eating beef, no Brahmin could remain a Brahmin; you read in the Vedas how, when a Sanyasin, a king, or a great man came into a house, the best bullock was killed; how in time it was found that as we were an agricultural race, killing the best bulls meant annihilation of the race. Therefore the practice was stopped, and a voice was raised against the killing of cows.”

Now have the customs changed as well? With globalisation, imports, etc., we need not be dependent on our cattle, white or black, to give us milk.

Vivekananda again: “As time rolls on, more and more of the Smritis will go, sages will come, and they will change and direct society into better channels, into duties and into paths which accord with the necessity of the age, and without which it is impossible that society can live. Thus we have to guide our course… and I hope that every one of us here will have breadth enough, and at the same time faith enough, to understand what that means, which I suppose is the inclusion of everything, and not the exclusion.” (emphasis added).

Savarkar was dismissive of cow worship: “A substance is edible to the extent that it is beneficial to man. Attributing religious qualities to it gives it a godly status. Such a superstitious mindset destroys the nation’s intellect… Let the movement for cow protection be based and popularised on clear-cut economic and scientific principles. Then alone shall we achieve genuine cow protection like the Americans.” Note the specific reference to a people known for their beef-eating.

Savarkar again: “The cow should not be the emblem of the Hindu nation. The cow is but a milch symbol of the Hindu nation. By no means should it be considered its emblem. The symbol of Hindutva is not the cow but the man-lion (reference to Narasimha, considered the fourth incarnation of Lord Vishnu). Whilst considering the cow to be divine and worshipping her, the entire Hindu nation became docile like the cow. It started eating grass. If we are to now found our nation on the basis of an animal, let that animal be the lion. We need to worship such a Narasimha. That and not the cow’s hooves, is the mark of Hindutva (emphasis added).”

Sometime back, I was pleasantly shocked to read that the RSS chief, Mohan Bhagwat, argued for education and job reservations on economic criteria and not on caste grounds. Very sensible. But did Bhagwat say this before the Bihar election to embarrass Modi and make him lose the election, or because underneath it all, the RSS leader is actually very progressive?

Banish the thought — the Muslim hunters in Alwar belonged to the VHP, a part of the RSS. Further, the economic arm of the RSS, the Swadeshi Jagran Manch, has more in common with the communists and the Indira-Sonia brand of economics, than with progressive economics (a la Narasimha Rao-Manmohan Singh, Atal Bihari Vajpayee, and especially Modi). And now, Bhagwat’s demand that there be a national law against cow slaughter (despite Hindutva, Swami Vivekananda, Sarvarkar) is suggestive of the RSS fishing in troubled waters.

The Akhlaq murder happened before the Bihar election which the BJP lost; the Alwar murder has happened post-UP, a state where Modi’s BJP scored a spectacular victory. After Lok Sabha 2014 and UP 2017, it is Modi who is the undisputed leader of the party. Since that is the case, can anybody point to any rational argument as to how Modi benefits from any of this abominable Muslim hunting? He doesn’t — but he can be hurt by all the ill will it generates among the large middle class that was previously not for the BJP. For example, the middle class might just vote Congress (or AAP) in the forthcoming Delhi municipal elections.

Last year, post-Akhlaq, PM Modi made the following statements on cow vigilantism: “A gau bhakt (cow devotee) is different, seva (cow protection) is different. I have seen that some people are into crimes all night and wear the garb of rakshaks in the day… 70-80 per cent will be those who indulge in anti-social activities and try to hide their sins by pretending to be gau rakshaks. If they are true protectors, they should realise that most cows die because of plastic, not slaughter.”

There is little evidence to suggest that Modi has changed his mind on so-called gau rakshaks; he has nothing to gain and everything to lose by pursuing a divisive social agenda; he has to worry both about the enemy within, and the enemy outside, his development tent. There is a natural, near-universal suspicion that the BJP is actually quite happy with the Hindu vote consolidation that Muslim hunting might bring about. Modi needs to forcefully correct this impression if his agenda is indeed development rather than a covert or overt establishment of a Hindu Rashtra. For the sake of India, and social harmony, let us hope he succeeds in tackling this latest threat to his goal of transforming India.