Covid 19 and Ramzan! Muslims must innovate to share Ramzan spirit – 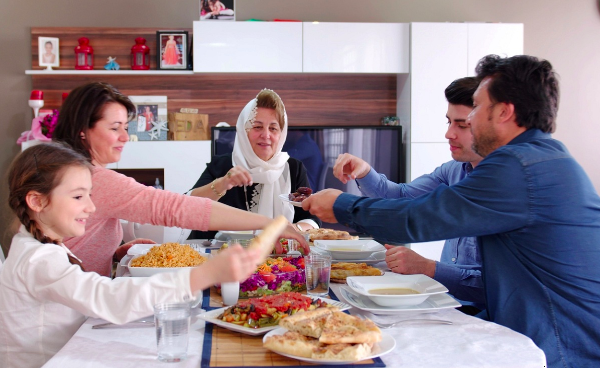 A typical day during the month of fasting begins with families sitting down to share a pre-dawn meal (sehri) before starting the fast and ends at sunset with a family/community iftar. People gather in large numbers (Representational Image: iStock. Note: How do our Muslim fraternity manage the month of fasting, Ramzan, caught between the pulls of social distancing demanded by the state in the context of CORONA and their religious demands for close family gathering?
In this article, Hasan Suroor, the writer gives an educative view for our readers. The Christians all over the world have just gone through their Lenten season without coming in direct conflict with state governments’ demand for a strict lock-down. Even the Pope has stayed aloof from taking sides with conservative and liberal practitioners of religion.

Of course there have been outbursts between liberal lay people and police in countries like US. Even bishops in different countries, specially in Europe argued, and still continues to argue against strict lockdown in their religious practice. Since this is a very touchy religious issue of deeply held conviction and freedom, state governments also adopt a policy of enforcing rules softly, or as they say “Hurry up slowly!”(Festina Lente!”)

We wish our Muslim brothers, the world over, a very happy and spiritually nourishing RAMZAN! james kottoor, editor ccv.

Muslims are facing a tricky challenge as they prepare for the Holy month of Ramzan which begins on April 23 amid the Corona lockdown. Restrictions on large public gatherings are most likely to continue even after the lockdown. Which will make normal observance of Ramzan rituals almost impossible because community and family gatherings lie at the core of Ramzan.


It is the anti-thesis of the idea of social distancing; rather it aspires to bridge physical and spiritual distancing. A typical day during the month of fasting begins with families sitting down to share a pre-dawn meal (sehri) before starting the fast and ends at sunset with a family/community iftar. People gather in large numbers in mosques for namaaz, to greet each other, and to feed the poor.

It’s a way for families and communities to come together. The challenge for Indian Muslims, particularly, is to avoid a repeat of the Tablighi Jamaat’s irresponsible behaviour in holding a congregation in Delhi at the height of Covid-19. In Britain, doctors have warned of a “big spike” in infections during Ramzan.

Anything that leads to more social interaction is a big worry. People traditionally gather to open and close prayers and break fast at sundown with friends and neighbours, which could cause a big spike in infections,” according to Dr Adnan Sharif of Queen Elizabeth Hospital, Birmingham. Already, members of Muslim, black and Asian communities have been found to have been disproportionately affected by the pandemic because of their close-knit communal lifestyle, and the British Medical Association (BMA) has called for an inquiry into it. Meanwhile, a debate is raging in the Muslim world over how best to strike a balance between Ramzan’s essentially communal nature and the need to protect lives.

How can the essential spirit of the holy month be retained without breaching the lockdown regulations? Islamic scholars are being urged to issue authoritative guidance or fatwa amid conflicting opinions within the global ummah with hard-line purists opposed to any dilution of Ramzan’s sanctity. In Pakistan, the government is under intense pressure to lift restrictions on congregational prayers in mosques.

A group of hardline clerics led by Mufti Muneebur Rehman and Mufti Taqi Usmani is opposed to any interference by the government and wants the issue to be left to the clerics alone to decide. “We can in no way close mosques … It is not possible in any circumstances in an Islamic country,” Rehman said after a meeting with President Arif Alvi. Governments in other Muslim countries are also facing similar pressures.

So far, they have resisted. Iran’s Supreme Leader Ayatollah Ali Khamenei has made clear that there would be no exemptions: all mosques will remain closed during Ramzan, and the ban on mass gatherings, including congregational prayers, will remain. He urged the people to pray in their homes during Ramzan. In Iraq, Ayatollah Ali Sistani, the most senior Shi’a cleric, has also ruled out any concessions during Ramzan and gone so far as to waive fasting obligations for those who are not able or willing to practice social distancing.

In the Sunni world, there has been no official word from Saudi Arabia — the self-styled guardian of Sunni Islam — but any exemptions are unlikely considering it has taken the unprecedented step of cancelling the Hajj. Egypt and Turkey have indicated there is going to be no change in lockdown rules during Ramzan.

Another issue being debated concerns potential health risk of fasting in the time of a pandemic, especially for those with underlying medical problems. Opinion is divided. Shia scholars have allowed limited exemptions. People who tested positive for coronavirus and have shown symptoms for less than two weeks are exempted from fasting.

Also exempted are those above 60 with underlying medical conditions. Sunni legal experts, however, have ruled out any exemptions other than those that already apply in special circumstances. Indeed, Egypt’s Grand Mufti Shawki Allam has said that fasting actually strengthens the immune system and helps to fight the virus. Meanwhile, the lockdown has led worshippers to come up with new and innovative ways of adapting to the new situation.


Britain’s Ramadan Tent Project usually holds Open Iftar events across the country where hundreds of people from all faiths congregate under a canvas and share a meal. This year, it will a “virtual Iftar” and it is expected to attract thousands, according to its organisers. Those who sign up will receive a pack containing everything they’ll need to create their own Iftar experience while staying at home.

It will go on throughout Ramzan over Zoom, with calls to prayer livestreamed over Facebook each day. “It’s an opportunity for millions of people who will be observing from their homes to celebrate and share the Ramadan spirit during an unprecedented time of physical distancing,” said Open Iftar’s founder Omar Salha.

The Muslim world’s response to the pandemic in reconciling the spiritual urges of the faithful with the temporal compulsions of the time has been refreshingly pragmatic so far, demonstrating rationality and common sense. It is to be hoped that Islamic scholars and Muslim politicians will stand firm and not blink in the face of pressure from so-called “purist” elements.