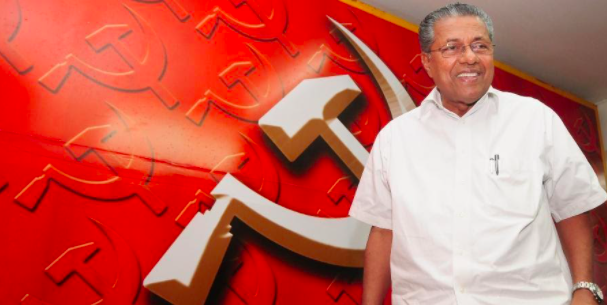 By Prabhu Chawla, in New Indian Express,  27th December 2020 – A spectre is haunting Kerala, the spectre of Communalism.

This article by Prabhu Chawla is published to give an insight into a beief history of Kerala where Communist party of India succeeded to capture political power through ballot box, not through the barrol of the gun,  revolution.

It happened on June 16, 1969, when the venerable Marxist patriarch EMS Namboodiripad became the  first communist Chief Minister admired by all. One wishes he had many followers in today’s Communist party!

Today all political parties are alike, all running after power and pelf and steeped in corruption like so many divided churches. Result? Honest citizens hesitate or hate joining any parties or organized religion. For more read the qrticle below. james kottoor, editor ccv

A spectre is haunting Kerala, the spectre of Communalism. Paraphrasing Marx’s Manifesto seems apt at this time when Marxism survives as discredited dogma and Marxists an endangered species. Left with an obsolete textbook for connecting the masses against the classes, our leftover Leftists are looking for new ways to reach Stalinist paradise.

But it’s a Faustian bargain Kerala Chief Minister Pinarayi Vijayan has struck with polarisation.The 75-year-old Comrade is a classic example of the Marxist muddle; his party CPI(M) abhors religion and regionalism but is now socialising with sectarianism.

Since the success of a political party is measured in terms of votes and seats, the CPI(M) is almost politically bankrupt, abandoned in ideological ICU. Once the party ruled three states, held over 40 Lok Sabha seats and was present in more than ten states. It lost power in West Bengal and Tripura.

It has less than half a dozen MPs, surviving on crumbs from other Opposition parties. Vijayan’s bleak choice reflects the preferential practicality of ‘Divide and Rule’ by crafting a Hindu-Christian coalition as he prepares for the Assembly elections in April-May 2021. As chief minister, his performance during the past 55 months has been better than many of his counterparts. But, he now realises that simply waving the red flag does not cut much ice with voters, who are being abscinded along religious and caste lines.

His current mission is to create a wedge between Kerala’s two dominant minorities — the Christians and the Muslims. Put together, they constitute over 40 per cent of 35 million God’s Own Countrymen. The objective is to convert them into God’s Own Communists. The abovementioned communities have been traditional Congress followers or supporters. The Indian Union Muslim League (IUML) has been part of the Congressled United Democratic Front (UDF) for almost four decades.

Vijayan is cashing on this confusing camaraderie, calling the Congress, in so many words, an IUML stooge. He hopes the Christians are alarmed by Kerala’s demographic changes and the increasing influence of hardcore Muslim political parties in the UDF.

The concerned Comrade has reasons to worry. The Welfare Party of India, backed by the Muslims, had a tactic alliance against the Left Front candidates in the local elections. An impressive performance of the Social Democratic Party of India, the political wing of the Islamist Popular Front of India (PFI), in the municipal elections led to panic among other communities.

Vijayan seized the opportunity and started a dialogue with the Christians who are the recent segment of BJP’s outreach. The CPI-M had lost a large chunk of its Hindu base, mainly OBCs, Dalits and tribals, over its pro-women stand on Sabarimala.

Its current plan is to compensate the loss by wooing the Christians and the Muslims who perhaps believe that only the Left can stop the saffron footprint from expanding in Adi Shankaracharya’s Kerala. Vijayan finagled Kerala Congress (Mani), supported by a section of the Christian community, into the Left Democratic Front. In addition, he met bishops and assured the Christians that his government has no plans to implement the Church Act, which aims to establish the Devasom administrative model in their places of worship.

The CM’s assurance would keep churches out of the ambit of the state government audit. Previously, a draft was posted on an official website by Justice (retd) KT Thomas, a former Supreme Court judge and chairman, State Law Reforms Commission. The secular credentials of the Marxists obfuscate the first communal act of executive power in India. In June 16, 1969, the venerable Marxist patriarch EMS Namboodiripad carved Malappuram out of Palakkad and Kozhikode when he was the Chief Minister — the first time a special district was created for a community in a blatant act of Communalism mating with Communism.

It was a reward for the Muslim League’s political support of his government. “Denounced by its opponents as ‘the illegitimate child of the Two Nation theory’, Malappuram – ‘Mopalastan’ to its critics – combined within a single district those taluks which forty eight years before, in 1921, had been the scene of the Mapilla rebellion,” writes South Asia expert Professor Robert L Hardgrave. Vijayan has realised that the BJP has lassoed away a large chunk of Hindu voters from the Left by polarising the electorate.

The saffron party may not have won seats but its popular vote share has been growing consistently for the past ten years, rising from about 10 percent in 2016 to around 13 percent in 2019. The BJP has been strident against the rising Islamic fundamentalism and demographic distortions in Kerala. Both Christian and Hindu population has been declining over the past three decades as Muslim numbers climb. According to the 2011 Census, Muslims accounted for 26.56 as against 24.70 percent in 2001. Hindus declined from 56.16 percent to 54.73 and Christians from 19.02 to 18.38 in the same period. Hindus are vertically divided along caste lines, with Ezhavas and Nairs forming over 36 percent, which is divided between the Congress and the Communists. Vijayan is not considered an Ezhava, being the son of a toddy tapper.

The Kerala chief minister is a Teflon Commissar of Controversy. He was one of the accused in the state’s first political murder of Vadikkal Ramakrishnan in April 1969. He was acquitted. He was arrested again during the Emergency. He was charged with corruption in 1998 as state Electricity Minister, in the infamous S N Lavalin case. The CBI accused him of causing a huge loss over granting a contract for the repair of electricity generators.

He was again acquitted. His detractors, both in his party and outside, were using these cases to prevent him from becoming the CM. Now, his own principal secretary has been arrested in a gold smuggling case. But one of the 17 Politburo members and Kerala’s 12th chief Minister who carries a ten-party portmanteau, Comrade Vijayan appears undeterred. National CPI-M leaders are conspicuous by their irrelevance. They are in the company of Rahul Gandhi and Opposition leaders as numerical baggage.

The CPI-M doesn’t have a single leader to match the political articulation of EMS Namboodripad, Jyoti Basu, AK Gopalan, Somnath Chatterjie, Harkishen Singh Surjeet et al. Most of its current leadership cannot win their own seats, let alone lead the party to victory.

Vijayan knows he has to get the party and himself out of the backwaters and create a red wave around the shores of the Arabian Sea. He is dangerously diluting red with a tinge of saffron and green. But voters are not colourblind anymore, though politicians have become colourless in the age of ideological idiosyncrasy. The CPI-M may be getting a new political PANTONE, but it is the tone that is disturbing.