Communion to the Divorced-remarried OKed 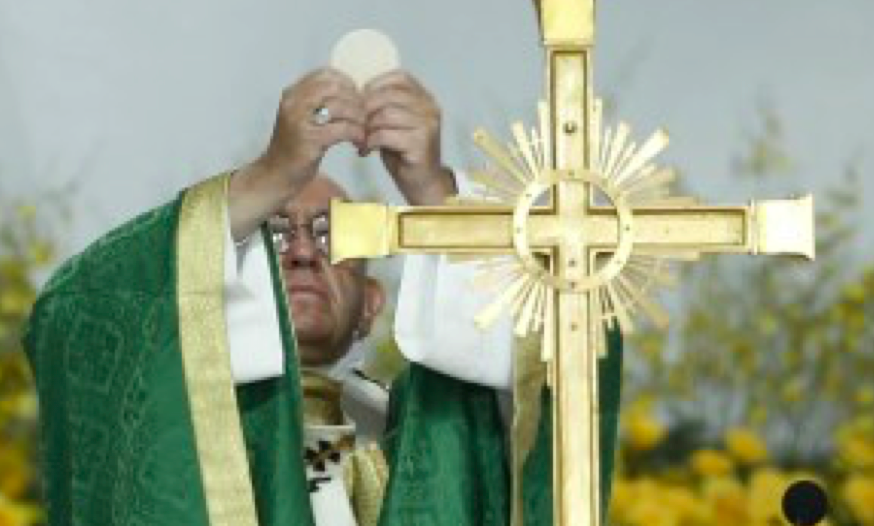 Francis has praised the text saying it correctly spells out the way his apostolic exhortation should be understood. Pope Francis has endorsed an interpretation of his family synod document that allows divorced and remarried Catholics to receive the sacraments in certain circumstances.

(Note: Central to this report in the Tablet, UK, is Pope’s praise and approval of Argentenian bishops’ explanation of Pope’s Amoris Laetitia which was intentended for allowing communion to civilly divorced and remarried, but was not clear enough. Francis produced the “Amoris” only because the Synod bishops could not reach consensus on the topic even after two Synods of discussion. But the Pope himself was not fully satisfied with his own  explanation and found the Argentenian explanation clearer.

The substance of the Argentenian clarification is that local churches can and should come up with their own guidelines and should not wait for popes to settle every doctrinal or moral question. In short it is a practical application of the principles of co-responsibility at Papal universal level and subsidiarity of bishops

at local level. What the Pope has been keen to stress was his pastoral practice was not a break with traditional doctrine which was firmly against admitting divorced to communion. Whether he succeed to convince the orthodox in this endeavour, is any one’s guess. james kottoor, editor)

Bishops from the Buenos Aires region of Argentina recently released a document saying that remarried couples can be given communion if they find it impossible to live like “brother and sister”, can’t obtain an annulment and have been on a “journey of discernment”.

They argue that the Pope’s document “opens up the possibility of access to the sacraments of Reconciliation and the Eucharist” but stress it should not be seen as “unrestricted access” in any circumstance.

Francis has now praised their text saying it correctly spells out the way his apostolic exhortation, Amoris Laetitia, should be understood and that “there are no other interpretations”.

Significantly, the Pope’s response was published in the the Vatican’s newspaper L’Osservatore Romano, the publication where a number of articles presenting a papally-approved understanding of Amoris Laetitia have been published in recent weeks.

The Buenos Aires bishops wrote their reflection specifically on Chapter Eight of the text where the Argentinian Pope writes in a footnote that the sacraments can be given to divorced and remarried Catholics in “certain circumstances.”

On the papal plane returning from the Greek island of Lesbos in April, Francis said he had “forgotten” putting the footnote in and has studiously avoided giving a definitive yes or no over whether remarried Catholics can receive communion.

But his approval of the Argentinian bishops’ reflection is in keeping with a central point of Amoris Laetitia, namely that popes do not need to settle every doctrinal or moral question, meaning that local churches can produce their own guidelines.

At the same time his latest move is likely to anger conservatives who initially tried to argue that Francis’ family document did not allow the divorced and remarried access to communion. More recently some have called for the Pope to clarify the text, alleging it contains a number of doctrinal errors.

While Francis encouraged debate during the synod gatherings that produced Amoris Laetitia he has been keen to counter interpretations which argue that his text is a break with Church tradition or that it makes no significant changes to pastoral practice.

To that end, he has named Austrian Cardinal Christoph Schonborn, an eminent theologian who edited the Church’s catechism, as an official interpreter of the document.