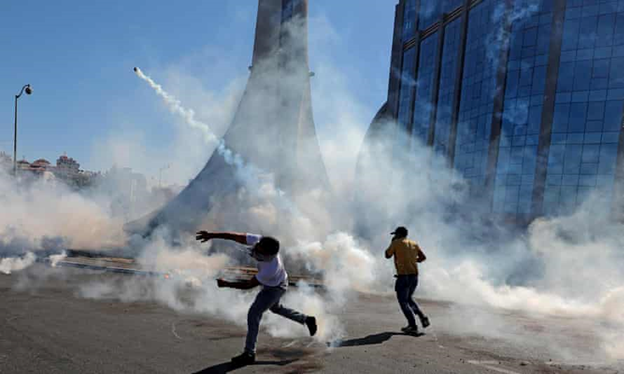 The Guardian view on intercommunal violence in Israel: a dangerous development with deep roots! Guardian Editorial, Fri 14 May 2021

Political rhetoric has cultivated hatred. Both Palestinian and Jewish citizens are paying the price.

In the land of the so-called Prince  of PEACE, there has never been  anything but WAR ever since he was borne, nay even before he was borne. We discussed this issue even before! Precisely for that reason JESUS the Jew has always been impossible block in the throat either to swallow or spit it out,  for me.

This is not to say that my esteem and admiration for him, as a historical luminary, has diminished one bit, only I am caught in a dilemma. What is the dilemma part? Taking the child in hand Simon the sage called him a sign of contradiction raised up for th the rise and fall of many in  Israel.

Even before his birth the wise men wanted to worship him and the Herods wanted to eliminate him. At his birth angels in heaven sang, peace to men of good will! Are they all fables for men of ill-will to fight? Of course, didn’t all start with the birth of Isaac and Ismael, one legitimate, other illegitimate?

Hasn’t this guy Jesus himself say, ‘I have come to bring sword between members of the family, not unity or comerederi! These are all found in the    gospel/Bible which some call a tissue of lies! True? No place here to discuss!

The family feuds or nation-state wars go on from the time of crusades with no end in sight. It is making two peaceful families, Israel and Islam(Palastine) Islam means peace – two unending warring nations, an insult to rhyme and reason and 21st century “Fratelli Tutti” mode of living.

Is there anything more scandalous than the fight between Israel and Palestine, two small nations? I for one have given up all hope of reconciling both as hopeless as between India and Pakistan on Kashmir, being not amenable either to rhyme or reason! james kottoor(in Chicago) editor ccv.

Please read below the Guardian Editorial!

The horror unfolding in the Middle East is both old and new. There is a terrible familiarity to the destruction the Israeli state is raining down upon Gaza, and the lethal missiles fired from the Strip by Palestinian militants. Three wars and numerous battles have taught everyone what to expect: indifference to civilian lives on both sides.

Already 119 Palestinians are dead, including 27 children, while eight Israelis are dead, including one child. The Israeli military describes its approach this time as a “higher tempo and intensity of attacks”, while Hamas is using “heavy rockets” to target heavily populated areas, including Tel Aviv. The risk of escalation into a full war remains. Israel has called up thousands of reservists.

The unexpected and chilling development has been the outbreak of intercommunal violence, with the last few days seeing mob attacks upon both Palestinian citizens of Israel and Jews, and destruction including the torching of synagogues and smashing up of Arab-owned businesses. Ultranationalists, brought by a social media callout explicitly threatening violence, were filmed chanting “Death to Arabs”.

An Arab motorist was lynched in the same Tel Aviv suburb, while in the city of Tamra, a Jewish man was stabbed in the neck. The prime minister, Benjamin Netanyahu, has described such incidents as the biggest threat to Israel, while its president, Reuven Rivlin, said that “a civil war [would] be a danger to our existence, more than all the dangers we have from the outside”.

On one point Mr Netanyahu is unquestionably right. “Nothing justifies the lynching of Arabs by Jews and nothing justifies the lynching of Jews by Arabs,” he said. But these events did not spring spontaneously from society. “Teaching and cultivating ethnic rage takes time,” writes the analyst Dahlia Scheindlin. “And for years in Israel, the leadership entrusted with serving its citizens has been pumping hatred into the air.”

Avigdor Lieberman and Naftali Bennett took the lead. But Mr Netanyahu took their cue, while attacking Palestinian leaders for inciting violence and hatred. He has presented Palestinian citizens, one-fifth of Israel’s population, as a threat and legitimised the far right with his embrace. To win elections, he warned that Arab voters were going to the polls “in droves” and warned that opponents were “plotting with the Arab parties to form a government”.

The 2018 nation-state law explicitly granted rights to one group of citizens and denied them to another; a year later, Mr Netanyahu said that Israel “is not a state of all its citizens”. He embraced the racist anti-Arab Jewish Power party, bringing it into the Knesset.

Such rhetoric and tactics have alienated Israel’s Palestinian citizens and identified them as a target. If the rallies that brought Arabs and Jews together across the nation on Thursday showed the aspiration to peaceful coexistence, the violence that prompted them pointed to the ugly reality.

While the conflict appears to be aiding Mr Netanyahu in his immediate battle to cling to his position, just when his rivals thought they were progressing in attempts to amass a coalition, it also shows the cost of all his years of leadership. The implicit message has been that Israelis can have safety without needing to concede anything to Palestinians.

But this week’s events show that there can be no peace and security while Palestinians live under Israeli control, with no prospect of a meaningful state of their own, and Palestinian citizens of Israel live without the same full rights and benefits as their Jewish compatriots. The heaviest cost, as ever, is likely to be borne in Gaza. But the Israeli military and Hamas are at least used to finding their exits eventually. Resolving intercommunal violence could be far more complicated, lengthy and uncertain.