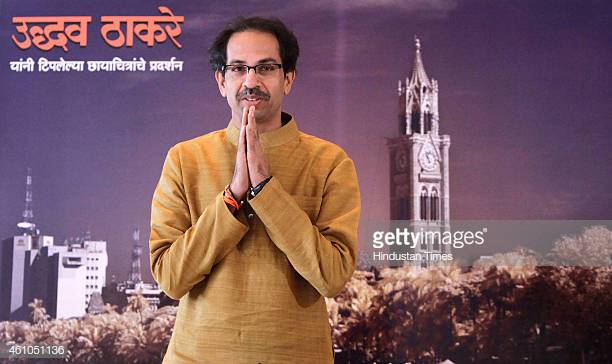 MUMBAI, INDIA - JANUARY 5: Shiv Sena President Uddhav Thackeray interacts with the media during a press conference held at Worli to announce his upcoming photo exhibition on January 5, 2015 Mumbai, India. Upcoming photo exhibition will be held at Jehangir Art Gallery from January 6-12, 2015. According to Thackeray, the highlight of the exhibition is infrared photography - where photographs have been given effects in pink and white colours. (Photo by Kalpak Pathak/Hindustan Times via Getty Images)

Note: Ensure that all of us in India learn from past mistakes and correct them, to go forward to build an India of PEACE AND PROSPERITY as befitting brothers and sisters of a one united FAMILY! Jk.

The fall of the three-day-old Devendra Fadnavis government has empowered an “aghadi” or front of Shiv Sena, Congress and NCP – three disparate parties whose coalition looks set to form the government in Maharashtra.

The standard criticism of such coalitions, which had become the norm after the decline of Congress hegemony and before the current era of BJP domination, is that they form “khichdi” governments that are unable to rule due to frequent dissensions among themselves, and ultimately fall apart from their internal contradictions. In an alternative view, however, the heavily centralised model favoured by BJP imposes certain limitations on governance too.

A “strong” government, for example, could build in a certain inflexibility as there is limited scope for consultation, contest of ideas, talent or initiative at grassroots and intermediate levels. This in turn can affect the quality of governance. India is a vast and diverse nation where an individual state can have the size and complexity of a normal country. This requires delegation of leadership and initiative rather than a top-down command structure. In such a context, it could be argued that a coalition government suits the genius of the country better. Indeed, the era of BJP dominance has also led to an economic slowdown of a nature the country hasn’t seen for a long time.

BJP’s centralised command structure and unrelenting mode of functioning may also not be unrelated to its ally troubles, as potential allies fear getting steamrollered by it. Shiv Sena feels, for example, that its sensitivities may be respected more by NCP or Congress than by BJP, despite its overall ideological affinity with BJP. Whether the “maha vikas aghadi” survives and succeeds in Maharashtra will, indeed, be an interesting political experiment to see what style of governance can serve the country better.

What may augur well for the sustainability of the aghadi is that Uddhav Thackeray will himself assume the chief minister’s post, instead of opting to operate the government through “remote control” as has been the erstwhile Sena style. Likewise Congress too plans to fully participate in the government, rather than support it from outside which too has been one of its favoured stratagems before. These moves ensure that both parties have skin in the game, instead of merely being the tail that wags the dog