Clinton gets under Trump’s skin in debate 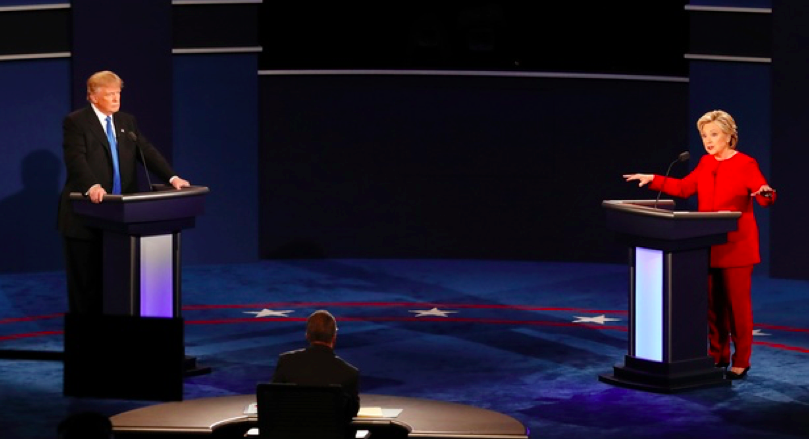 Clinton, a political figure so used to public stages for the last 40 years smiled through the whole debate, while Trump quite unused to these kind of exercises, managed to perform much more civilized than expected.  Both were trying to grow up in good mannered polite behaviour on stage to endear themselves to millions watching them

behave on the stage. In the final analysis what will bring them victory is the amount of   charm and good will they are able to exhibite to win the majority of hearts to vote for the one or the other. james kottoor, editor)

HEMPSTEAD, N.Y. — Donald Trump repeatedly clashed with Hillary Clinton during Monday's first presidential debate, interrupting her and appearing agitated at times as they tangled over the economy, her use of a private mail server and his unwillingness to release his income tax returns. Clinton maintained an even demeanor, smiling indulgently when Trump turned aggressive.

Clinton and Trump engaged in a vigorous back-and-forth on the debate stage at Hofstra University as polls showed them locked in a tight race. Given the wide interest in Trump, the business mogul and former reality TV star, and Clinton, the first woman to win the nomination of a major party, the debate was expected to draw a massive viewing audience.Here are the top takeaways from Monday's debate:

If Clinton aimed to get under Trump's skin in the first 30 minutes of the debate, the Democratic nominee appeared to succeed. Clinton often put Trump on the defensive, saying he had "rooted for" the collapse of the housing industry and had considered climate change to be a hoax. In another exchange, Clinton said, "I have a feeling that by the end of this evening I'll be blamed for everything that ever happened."

Trump interjected, "Why not?" Later on, Trump said he had a "winning temperament," prompting Clinton to respond: "Whew. OK."

Trump scored points with his core supporters by lamenting the number of jobs that have moved overseas. He opened with an extensive argument that jobs are "fleeing the country" and going to Mexico while the U.S. economy is being undermined by China. He pointed to Ford Motor Co.'s plans to build compact cars in Mexico and railed against Carrier's decision to move hundreds of air-conditioner manufacturing jobs from Indianapolis to Mexico. "So many hundreds and hundreds of companies are doing this," Trump said. His economic case could resonate in states like Ohio and Michigan that have grappled with the loss of manufacturing jobs. "We have to stop our jobs from being stolen from us. We have to stop our companies from leaving the United States," he said. Clinton pointed out that her father was a small businessman, adding, "The more we can do for the middle class, the more we can invest in you, your education, your skills, your future, the better we will be off."

Often delivered with a smile, Clinton came prepared with pithy lines that undercut Trump's case on the economy. In an early exchange, Clinton said Trump would push for "trickle-down" tax cuts that would only benefit the wealthy, calling it, "trumped-up trickle-down." When Trump got in a dig at Clinton's absence from the campaign trail, she said there was nothing wrong with spending time preparing for the debate. "You know what else I did?" she asked. "I prepared to be president."

Trump repeatedly underscored his role as a political outsider, questioning the economic stewardship of President Barack Obama and the administration of former President Bill Clinton, who sat in the front row. Describing the loss of manufacturing jobs in states like Michigan and Ohio, Trump said Clinton had been in government for 30 years, asking, "Why are you just thinking about these solutions right now?" When the discussion turned to foreign policy, Trump said Obama and Clinton failed to confront the Islamic State group, saying his opponent was there when it was "an infant."

Clinton savaged Trump with a lengthy explanation of why Trump won't release his tax returns, concluding he's got something to hide. She said Trump may not be "as rich as he says he is" or "maybe he's not as charitable" as he says he is. Clinton warned that perhaps Trump hadn't paid any federal income tax at all, noting that some of Trump's income tax returns in the 1970s showed he had paid no federal income taxes in certain years. Trump disclosed the returns to New Jersey casino regulators.

Clinton gave arguably her most concise answer to questions about her use of a private email server as secretary of state, taking responsibility and giving Trump nowhere to go. Despite her past statements in which she changed her story from previous iterations or left wiggle room by not being completely accurate, on Monday she avoided getting wrapped up in a lengthy exchange over one of her biggest liabilities. When Trumpsaid he would release his tax returns if Clinton put out what he called her "33,000 deleted" emails, Clintonsaid, "I made a mistake using a private email" server. Trump interjected, "That's for sure," prompting Clintonto respond, "I take responsibility for that."

Clinton turned the tables on Trump when he was asked to respond to his assertions that she doesn't have the "stamina" to be president. Trump questioned whether Clinton has the physical fitness to be president and he repeated the criticism directly to her. Clinton replied that Trump shouldn't talk about stamina until he's tried to maintain a busy schedule like that she kept up as secretary of state. And then she dug into him, adding, "This is a man who has called women pigs, slobs and dogs."

Trump has said black voters have "nothing to lose" by supporting his candidacy but he was forced to answer for his role in claiming Obama was born outside the United States. Clinton accused Trump of spreading a "racist lie" that our "first black president" was not an American citizen, adding, "He has a long record of engaging in racist behavior." Trump responded by recalling the bitter debates between Clinton and Obama during the 2008 Democratic presidential primary, saying Clinton treated Obama then with "terrible disrespect." Later, when Clinton said Trump's view of black communities was too grim, Trump sighed, rolled his eyes and said, "Ugh."

Trump and Clinton seemed to agree on two potentially combustible political issues: child care and barring people on the terrorist watch list from buying guns. Both are unusual positions for a GOP presidential nominee. Trump injected an element of surprise when he said he disagreed with many Republicans and "we have to look at" barring the sales of guns to people on the terror watch list. The proposal is sharply opposed by the National Rifle Association, one of Trump's chief backers, but Democrats have hoped it will change the dynamic of the gun debate. Trump also said he backs government aid for child care expenses, an issue that has been pushed by his daughter, Ivanka Trump. Clinton and Trump have both proposed plans to help families pay for child care.

Trump stood by his positions on two issues in which he has been frequently skewered by fact checkers: the Iraq war and his role in the so-called "birther" movement. Trump denied Clinton's claims that he supported the Iraq war, saying it was a "mainstream media nonsense put out by her. I was against the war in Iraq." But there isn't any evidence Trump expressed public opposition to the war before the U.S. invasion. Trump also claimed that Clinton's 2008 presidential campaign was responsible for launching the birther movement that questioned Obama's American citizenship. That's not the case — Clinton's campaign never publicly pushed that notion during the 2008 primaries.