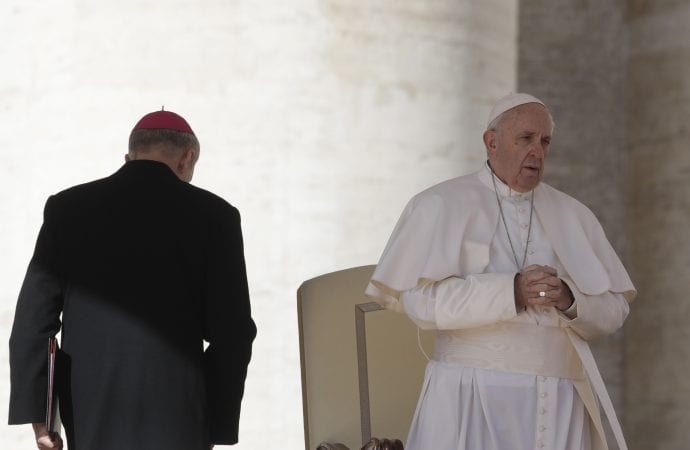 Note: Vatican’s Crux news presents itself as giving the “Catholic pulse! From Rome.” See for yourselves how foggy “Clericalism” and “Homosexuality” are treated. Those who speak on them seem to know all about them. Only the listeners are not convinced.

Pope Francis floated the word  ‘Clericalism’ as the fountainhead of the whole clerical sex mess. His critics instead harp on homosexuality starting with his worst critic, Maria Viganò, a former papal envoy in the U.S. who wanted the Pope even to resign and go for covering up homosexual lives of top cardinals.

Late revelations, already published in CCV, seem to suggest there is a lot of truth in what Vigano said. Only Francis has not responded to him directly so far, although he was the one encouraging all bishops, not to be afraid to criticize him from Family Synod onwards.

Now it seems to have become his style to respond critics with his PROLONGED THUNDEROUS SILENCE! Hence, also the Crux headline, making fun of Pope’s Silence. Legitimate questions should be answered with a reply, not SILENCE!

Even independent observers like John Jay (his report of 2012), German Cardinal Gerhard Müller’s statement, Benedict XVI’ admission of a gay lobby in Vatican, views of “Dubia group” Raymond Burke of the U.S. and Walter Brandmüller of Germany,  all point  to the fact “the vast majority of abuses committed by priests are homosexual acts” —  80 % of them or 81% of abuse cases involved interaction between priests and minor males.

On the other hand there seems to be a lack of connection between ‘clericalism’ and sexual abuse. Besides a  studied effort is made to project homosexuality not sinful in any way,  making the top authority in Vatican, Archbishop Charles Scicluna of Malta say: that both homosexuality and heterosexuality are “human conditions that we recognize, and that exist, but they aren’t something that really predisposes to sin.”

Are you convinced? May be some of you or most of you are, but honestly not this writer, as experience and facts prove the contrary. Nor do I find any intrinsic or extrinsic connection between Clericalism and sex either, with all respect to Francis. And why  was there also an online petition signed by several thousand people demanding from the 114 presidents of bishops’ conferences who met in Rome, to take steps to root homosexuals out of the priesthood?  Voice  of people of God?

This reminds me of the ordeal Francis went through before he started “Operaton Chile!” He was totally sold behind  his “blue eyed boy, Bishop” & Group, but finally turned against  them and all Chile bishops had to resign and he himself had to apologize profoundly for the great mistake he made.  So we have to wait to see how this whole discussion ends.

That is why we started a serious discussion on homosexuality and clericalism alredy with March 4th post in CCV: Priest predators, who will bell the cat? (Editorial comment). At the same time we request our readers to pin point how and where we are wrong in demanding a free, frank, transparent discussion on HOMOSEXUALITY & CLERICALISM! james kottoor, editor CCV.

Please read below the Crux report on Homosexuality!

To offer just a partial list, there’s the event as it’s experienced by those actually taking part; the public face that the Vatican’s PR machinery tries to apply; the way the event is covered by the media; and the circus that unfolds around the event in protests, parallel meetings, news conferences, snarky tweets, polemical essays, and so on.

Analyzing how these differing perspectives coincide, and where they diverge, usually reveals a good deal about where things stand in terms of the politics of the Catholic Church at any given moment.

Such was again the case with the Feb. 21-24 summit on clerical sexual abuse convened by Pope Francis, and perhaps nowhere is that clearer than discussions of homosexuality, gay clergy, and whether a supposed “gay lobby” within the Church’s power structure has anything to do with the abuse scandals.

Beginning with the statistical fact that a 2004 John Jay report in the United States found that 81 percent of abuse cases involved interaction between priests and minor males, there’s long been an active discussion as to whether homosexuality has anything to do with the crisis.

(John Jay’s own 2011 follow-up report, on the “causes and context” of the scandals, rejected the assertion that gay priests are to blame.)

As for a “gay lobby” in the Vatican, something of the sort was acknowledged by Pope emeritus Benedict XVI, who in 2016 claimed to have “dismantled” it, and jokingly by Francis, who once quipped he’s never seen the membership badges.

That debate revived ahead of the recent summit, as Cardinals Raymond Burke of the U.S. and Walter Brandmüller of Germany sent an open letter to participants urging them to “break the silence” on a climate of moral corruption.

“A decisive act now is urgent and necessary,” the cardinals wrote, calling for an end to the “plague of the homosexual agenda” in the Church, organized networks of protection, and a “climate of complicity and a conspiracy of silence.”

Burke and Brandmüller are the two surviving members of the group of four cardinals who submitted a set of critical questions, or dubia, to Francis in the wake of his controversial 2016 document Amoris Laetitia that opened a cautious door to reception of communion by Catholics who divorce and remarry outside the Church.

Their call was buoyed by German Cardinal Gerhard Müller, formerly the Vatican’s top doctrinal official, who said in an interview, “One cannot escape this reality” that “the vast majority of abuses committed by priests are homosexual acts.” There was also an online petition demanding that the presidents of bishops’ conferences who met in Rome take steps to root homosexuals out of the priesthood that was eventually signed by several thousand people.

Yet within the summit itself, that ferment had relatively little echo. Homosexuality was never mentioned in any of the major addresses, most of which were delivered by key Francis allies such as Cardinals Blase Cupich of the United States, Reinhard Marx of Germany and Oswald Gracias of India. Most participants reported that it also didn’t surface much in the small group discussions.

Notably, it also wasn’t mentioned in either of the talks Francis himself delivered opening and closing the summit.

It did come up at the daily news conferences held by the Vatican, in one of which veteran Italian journalist Sandro Magister asked Archbishop Charles Scicluna of Malta, a former Vatican prosecutor on abuse cases and widely considered a leading reformer, why homosexuality hadn’t been examined.

In response, Scicluna said that both homosexuality and heterosexuality are “human conditions that we recognize, and that exist, but they aren’t something that really predisposes to sin.”

In another, Delia Gallagher of CNN asked if the talk about a “gay lobby” might be a smoke screen for not solving the abuse crisis, to which Cupich, somewhat cryptically, replied that it’s a “theory.”

To some extent, such reluctance to talk about the issue may be influenced by the fact that from the beginning, discussion of a “gay lobby” has been heavily conditioned by ideology. Some voices on the Catholic right blame the abuse crisis on homosexuality, while the left tends to fault clericalism, celibacy and the exclusion of women from the priesthood.

Perceptions of an ideological agenda haven’t been helped by the fact that the voices raising the homosexuality question most loudly tend to be Francis foes tout court, and that an alleged gay mafia featured prominently in the letter from Italian Archbishop Carlo Maria Viganò, a former papal envoy in the U.S., accusing Francis of complicity in a cover-up regarding ex-cardinal and ex-priest Theodore McCarrick.

Understandably, reformers often try to steer clear of such political thickets and keep their eyes on the prize – i.e., fostering tools for prevention, detection and accountability for abuse, which in principle aren’t ideological but common-sense.

Yet there also could appear to be a strategic dimension to the discretion, because this is how Francis tends to engage his critics – by not engaging them.

Famously, he has never answered the dubia on Amoris, in effect refusing to legitimize the criticism. (The pope’s supporters have offered detailed rebuttals, but that’s not the same as a formal papal declaration.) Much the same thing appears to be unfolding with regard to the drumbeat on the gay lobby.

One could view this approach in different ways. It could be seen as sound management, refusing to get bogged down in conversations regarded as a distraction. As Charles de Gaulle famously said, “to govern is to choose,” and Francis may be choosing not to spend time and energy on what he sees as irrelevancies at best, thinly disguised prejudice at worst.

For critics, the pope’s silence is often derided as rank hypocrisy, the double standard of a leader who extols open discussion but sometimes isn’t seen as practicing it.

Whatever one makes of it, the take-away from the summit vis-à-vis an alleged gay network underneath the abuse crisis would seem to be that if there’s going to be a debate, it’s not going to happen in official Vatican venues. In that arena, dissidents appear destined to hear only the sound of silence.