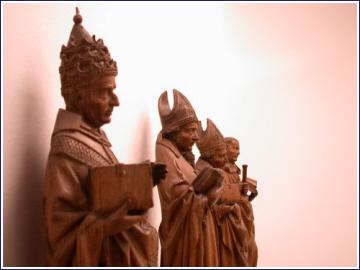 In 2011 Voice of the Faithful criticized the John Jay Institute's "Study of the Causes and Context of the Sexual Abuse Crisis" for describing clericalism but not naming it, much less citing it, as a principal cause for clergy sex abuse and the subsequent coverups. "Clericalism," our report noted, "is an overriding set of beliefs and behaviors in which the clergy view themselves as different, separate, and exempt from the norms, rules and consequences that apply to everyone else in society."
In these early months of the Pope Francis papacy, some observers see signs that clericalism could be a major target of the reforms this pope might seek. We certainly hope so. Pope Francis’s example of personal simplicity along with some of the changes he is expected to initiate in Church structure could bring about dramatic changes in the clerical culture.
Voice of the Faithful will continue to challenge clericalism as an impediment to the healing and reform essential to the Catholic Church today. As part of this effort, we are posting reports during spring and summer 2013 to help identify key elements of the culture that engender clericalism, to suggest ways we may all work to overcome its failings, and to propose use of a "pastoral provision" that could immediately begin to reduce the impact of clericalism on the faithful.
We urge you to read and reflect on these documents and to find ways to add your voice to those of many others who are calling for reform in the Catholic Church, especially for reform of the clericalism that affects many in the clergy and hierarchy.
Clerical Culture Among Diocesan Clergy in the U.S.

This introduction to clericalism draws from two recent books on clericalism written by priests from the United States: Clericalism: The Death of Priesthoodby Fr. George B. Wilson, S.J.; and Clerical Culture: Contradiction and Transformation by Fr. Michael L. Papesh. We encourage you to purchase these books, and especially recommend the one by Fr. Papesh, a pastoral diocesan priest who lives within the clerical culture but is aware of the contradictions between the culture and service to the gospels and to the mission of the Church to which priests are called.
We suggest using at least one of the books along with the document below to inform yourself about the elements that go into the development of clerical culture. You also could consider forming a study group in your affiliate or parish to discuss ways this culture affects the servant leadership that we all expect of the clergy and hierarchy.
Clerical Culture Among Roman Catholic Diocesan Clergy — overview of VOTF analysis, with bibliography
Celibacy: Key Element of Clericalism

A Brief History of Celibacy — a condensed summary, with bibliography
Mandatory Celibacy: Time to Discuss Its Flaws — an essay by Edward J. Greenan
Additional information is available through VOTF's Conversations About Celibacy effort and our petition to ordain married Catholic men as priests.

Source: Voice of the Faithful (Australia)