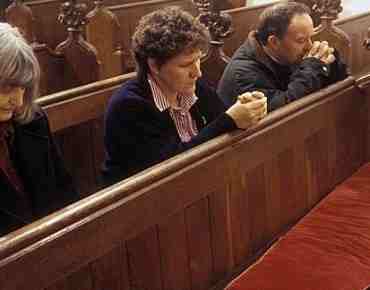 (Story: Editor, Matters India) Attendance at Church of England services has plunged to its lowest level ever as the Archbishop of Canterbury warned it was battling to maintain its place in an increasingly “anti-Christian” culture.

Official figures – based on an annual pew count – show that only 1.4 per cent of the population of England now attend Anglican services on a typical Sunday morning.

Even the Church’s preferred “weekly” attendance figures, which include those at mid-week or extra services, has slipped below one million for the first time ever.

Overall average attendances at Sunday services across England fell by 22,000 to 764,700 in 2014 – a fall of seven per cent in just five years, reported The Telegraph.

The proportion of the population attending Sunday services now is only around one third of that in the early 1960s.

The Church said that even though some congregations have been growing strongly – primarily new evangelical “church plants” – the overall gains were being wiped out by the sheer demographic effect of older worshippers dying.

It estimates that it loses around one per cent of its membership each year through death alone. Clerics now expect numbers to continue to fall for another five years but believe there will be an eventual upturn.

The Archbishop of Canterbury, the Most Rev Justin Welby, acknowledged the slump in an address to Anglican leaders around the world at a crisis meeting to discuss a split over homosexuality.

In a plea to archbishops and bishops from Africa and other parts of the “global south” not to break off communion permanently with more liberal branches of Anglicanism, he said it would be “easy to paint a very gloomy picture” about the Church of England’s prospects.

“The culture has becoming anti-Christian, whether it is on matters of sexual morality, or the care for people at the beginning or the end of life,” he told the meeting in Canterbury. But he insisted: “It is a struggle, but we are not losing.”

In extracts from his address to the Primates, leaked through the Nigerian news website Vanguard, he added: “In this country many talk of the post-Christian society, but the Church of England educates more than a million children in our schools.

“We are involved in almost all the food banks as, for the first time since the 1930s, we have hunger in this country. We are still a major part of the glue that holds society together.

“A recent attempt to introduce assisted suicide was crushingly defeated in Parliament. “We are exempted from the Same-Sex Marriage Act, showing that our voice is still heard against the prevailing wind of our society, and at much cost to ourselves, by the way.

“The Church of England is still a primary source of leadership for communities, to the dismay of the secularists.”

The Bishop of Norwich, the Rt Rev Graham James, said: “The 2014 figures are not in any way a surprise. Whilst the recent trend of the past decade continues, it has been anticipated and is being acted on radically.

“As part of a prayerful and considered response to these trends the Church is embarking upon the biggest renewal and reform process in over 150 years focusing our resources on prayer, evangelism, discipleship, vocations, leadership and training.

“We do not expect that trend to change imminently or immediately over the next few years due to demographics. We lose approximately one per cent of our churchgoers to death each year.

“Given the age profile of the CofE, the next few years will continue to have downward pressure as people die or become housebound and unable to attend church.”

But the Church is pinning its hopes on a new multi-billion pound “reform and renewal” drive.

Bishop James said: “The story is not one of inevitable decline. During 2013 to 2014 some dioceses continued to increase their attendance.

“In the past 12 months alone there are examples of growth and new churches across the country.

“In my own diocese the church of St Thomas Norwich has grown from 50 to 450 people in the past two years; in Bournemouth, St Swithin’s – a church which started in 2014 – now sees 500 people attending every week whilst in Birmingham St Luke’s Gas Street in is already attracting hundreds of young people since its beginning in 2015.

“There are many others like these and each is a sign of hope. Attendance statistics do not tell the whole story.

“There are many things that churches do that are not included in these data from running homelessness services and hosting foodbanks, to educating a million children a day in our schools to providing welcome and accompaniment to the least, the last and the lost in our society.”

The roots of the rift between liberal and conservative wings can be traced back decades but the current crisis erupted in 2003 when the US branch of Anglicanism – The Episcopal Church (Tec) – ordained its first openly-gay bishop, Gene Robinson.

Conservative Anglicans believe this goes against the teaching the Bible but liberals say Christianity should be inclusive.

Several Anglican churches, particularly in Africa and Asia, have since broken ties with The Episcopal Church, as well as the Canadian branch of Anglicanism, over the issue of homosexuality.

A new, more conservative, breakaway church has also emerged in the US and Canada known as the Anglican Church of North America (Acna).

Matters came to a head in 2008 when many conservatives boycotted the Lambeth Conference, the once-on-a-decade global gathering of bishops, because Tec was present. There have been several initiatives intended to heal the rift since them, all of them largely ignored.

The Archbishop of Canterbury, Justin Welby, now want to overhaul Anglicanism into as a loose confederation to enable disagreement with full schism.