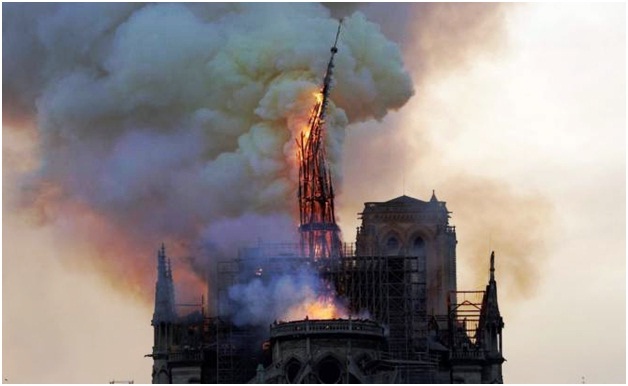 Note: Just to make you see, because seeing is believing. Looking at the image of Notre Dame spire burning and crumbling, seen above, and another where it is just burning, a Chilean priest Nemo Castaello, seen below, exclaims, Notre Dame  which represents the rotten Church should “finish burning and dying.”

It shocked and angered many who love Notre Dame, whom he pacifies with an apology. Castelli, a native of Chile, is currently associated with Boston College’s School of Theology and Ministry. He also gives his reasons for making such a comment, namely the flood of  stinking clerical sex abuse breaking out of the four walls of the Church.

No doubt it makes thinking sections, both believers and unbelievers,  young and old, those highly placed like French President raking their heads how to reconstruct the old without offending new thinking, since  what is burnt down was not just a Cathedral among other cathedrals or a historical monument among monuments,  but something much, much more. Read and add your own comments. james kottoor, editor, CCV. 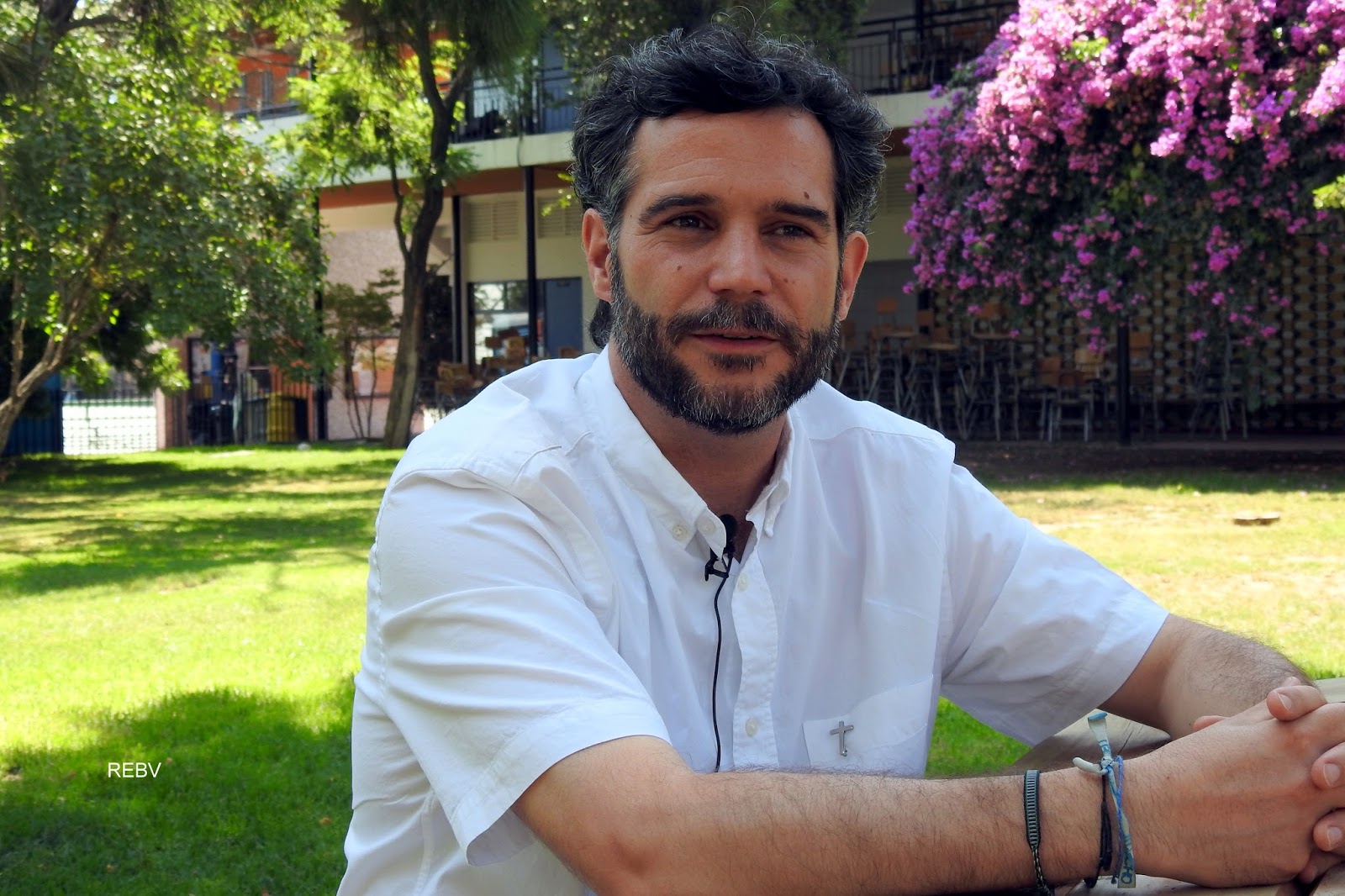 CHESTNUT HILL, Massachusetts, May 3, 2019 (LifeSiteNews) – A Chilean priest caused outrage when he commented on the Notre Dame cathedral fire, saying the destructive event represents how the Church has become “insignificant” and needs to “finish burning and dying.” 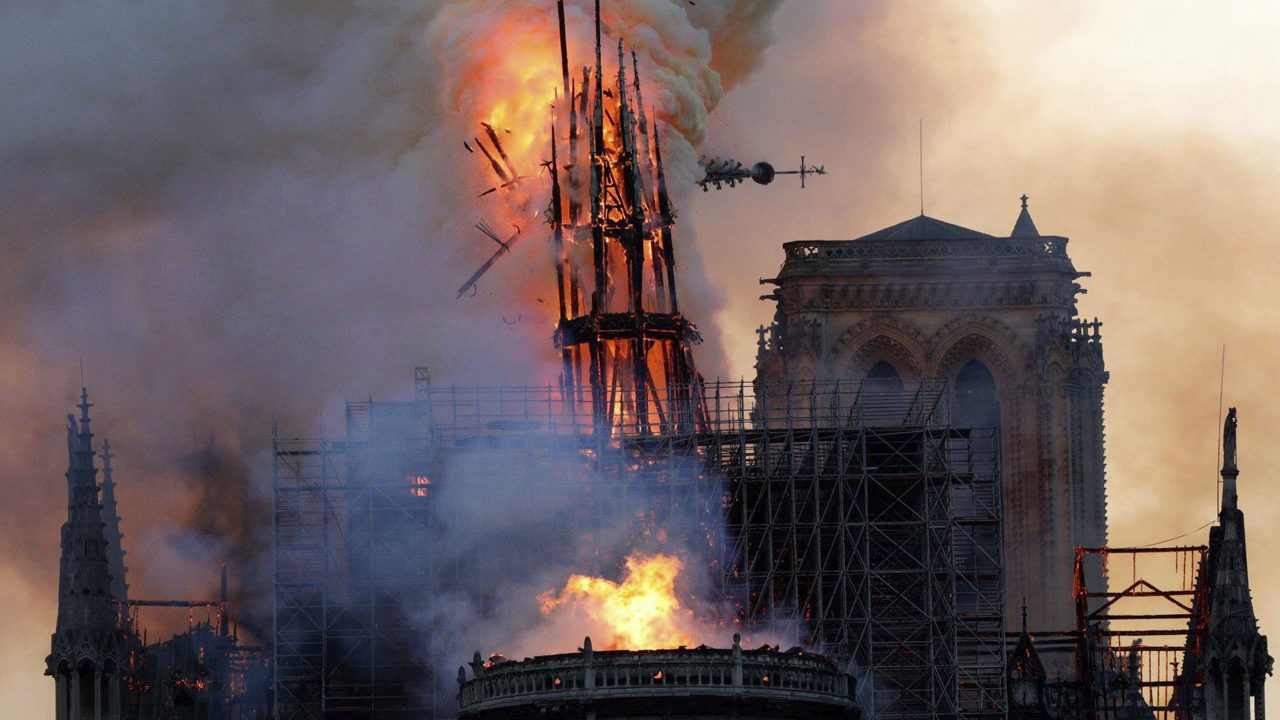 "What a prophetic beginning of Holy Week!” wrote Fr. Nemo Castelli, SJ on Facebook in Spanish. “I know that it is a marvelous heritage of the humanity of the 12th century, that it took almost 200 years to build it, that it is the most visited in Europe and that it is horrifying to see it being consumed.”

But it can represent a type of Church that has to finish burning and dying: a Church more like a museum, insignificant in the daily life of the people, that conceals and cares for the institution before the justice of the Kingdom and whose norms and style end up distancing the youth from God," he added Castelli thought enough of his opinion to publish it on Twitter.

Again proclaiming the disaster “a prophetic beginning of Holy Week,” the Chilean priest wrote in Spanish: “I know that it is a marvel of 12th-century humanity's heritage, but it can represent a type of Church that must finally die: that which is like a museum, insignificant in one's life, that cares for the institution and whose norms distance it from God.”

After an outcry, Castelli apologized on Twitter to those who love the venerable cathedral.“And I'm sorry for the inconvenience. I didn’t mean to offend the faith of those who have found comfort for centuries in Notre Dame, nor to the Paris community, which together with thousands of us mourn this accident,” he wrote.“I just think it's an image that can make us reflect as a church.”

Castelli, a native of Chile, is currently associated with Boston College’s School of Theology and Ministry. Last month, he gave a Spanish-language interview in which he said Chile’s young people are disenchanted with organizations, including the Catholic Church.“There is widespread disenchantment with institutions and collective organizations,” he said.

“Given this, there are particular features in the case of the Catholic Church that aggravate this sensation. In the first place, there is a growing gap between people's lives and Catholic doctrine, especially in the area of sexual morality. It no longer seems that there exists a way to humanize this area of life.”

He added that the “inconsistency” of Catholics makes “our way of life” lack credibility, and also that people “are tired of being told what to do and think, without respecting the autonomy of their conscience and their capacity for self-determination.” Finally, Castelli believes the Chileans are disgusted by the revelations of clerical sexual abuse.

In terms of young people, the priest believes that they and the Church have “decoupled.” “There is a complete decoupling,” he said.

“The Church is not successful in working with those who are searching, and with the language and the culture that are emerging. Associated with this, the main mistake we make as Church is to blame the goats because we do not understand their culture and they do not ‘get’ us, and we conclude ‘it is that the young are not like before,’ ‘it is that the youth are so bad, so uncommitted, so individualistic, so consumerist, that they forget God.’”

Castelli called this assumption “the second mistake,” saying the young are looking for “the transcendent.” “If you look at the numbers of religious studies, what is happening is that young people continue to believe, but their religiosity is changing. And when they go to the Catholic Church they don't find or don't tune in to its proposal, so they are looking elsewhere.” he said.

“For example, they find God more easily in nature and simplicity; they integrate corporality and pleasure better in life; they understand that truth has to do with authenticity and coherence between what I say and what I do; they are more realistic in demanding a heroism that accepts their own and others' vulnerability; they are more open to accepting diversity in every sense, and they value the autonomy of the subject very much.”

Catholic philosopher and author Peter Kwasniewski suggested that Castelli does not speak for all young Catholics. “I'm sure that some young people fit Castelli's description, but that is primarily because they have been abandoned by the very authorities to whom they should be able to look for guidance: their biological parents in the family and their spiritual fathers, the bishops and priests, in the Church,” Kwasniewski told LifeSiteNews.

“Most young people are cast adrift into secularizing schools that fill their heads with garbage and malform their consciences. Churchmen, for their part, instead of offering the youth a challenging and inspiring countercultural message, just offer them a stale, second-rate version of contemporary culture,” he continued.

“No wonder the youth feel bored and uninterested in the Church; it has nothing to offer them. If Castelli's advice were taken, it would only further secularize and dilute the Catholic Church, until it simply merged into the background of the rest of society.”

In 2010, the Church in Chile was plunged into a massive scandal over homosexual predation by members of clergy and its cover-up by bishops. The outrage surrounding the crimes of Fr. Fernando Karadima was exacerbated in 2015 when Pope Francis appointed Chilean Bishop Juan Barros, who had close ties to Karadima, to the See of Osorno. It flared up again when the pontiff said the Catholics of Osorno were suffering because they were “dumb.”

In a gesture of repentance for the Chilean scandals, all of Chile’s bishops tendered their resignation to Pope Francis in 2018. This March, the pontiff accepted the resignation of Ricardo Ezzati Andrello, the cardinal archbishop of Santiago, Chile.

Cardinal Ezzati has been implicated in a cover-up of abuse committed by Fr. Oscar Muñoz Toledo, the former chancellor of the Archdiocese of Santiago. Muñoz is alleged to have seven victims, five of them his own nephews. Ezzati denies that he was involved in a cover-up.

Ezzati was replaced by Bishop Celestino Aós who, last month, refused Holy Communion to worshippers because they knelt to receive the sacrament.

LifeSiteNews attempted to reach out to Castelli on social media but was not successful.